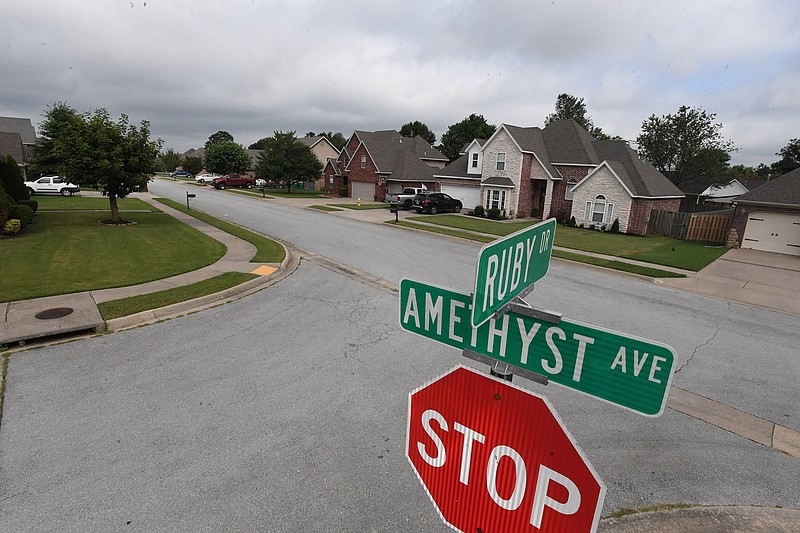 Amethyst Avenue in the Chantel subdivision, shares a name with another Amythyst Avenue in Springdale since Bethel Heights was annexed into Springdale recently. To avoid problems for emergency services, Springdale officials are considering their options. (NWA Democrat-Gazette/J.T. Wampler)

SPRINGDALE — Don Hudson spent Wednesday afternoon sorting statements, reports, forms and more related to his wife’s medical care. The documents arrive daily in the mailbox at the curb of his house on Amethyst Avenue.

Just 4 miles south, Crystal Chacon has become enchanted with the name of her street — also Amethyst Avenue. The white house with stepping stones and a fountain in the front yard is the first house she’s bought, her boyfriend Jimmy Herrera relayed Wednesday. She has lived there for more than a year.

One of the cross streets to this Amethyst is Crystal Court.

“She kind of took as a sign,” Herrera said.

Hudson’s Amethyst Avenue used to be part of Bethel Heights. Chacon’s has always been in Springdale. One of them might soon have a new address.

Springdale annexed Bethel Heights on Aug. 21. Springdale officials have found three street names that match in both cities and have started the process of changing the names, reported Patsy Christie, the director of the city’s Planning Department. Options for changes include renaming the street or simply adding a prefix or suffix to the name — Onyx Avenue might become North Onyx Avenue or Black Onyx Avenue to keep with the subdivision’s theme of streets bearing names of gemstones.

Christie insisted the city had made no decisions on names or which streets change. City code requires a public meeting before any street name is changed. None have been scheduled.

Residents might want to suggest new names for their streets, Christie added.

Hudson envisions the possible change of his street name a “nightmare.”

“I don’t want it changed,” he said of the address he’s had for 12 years. “I have a million places that I would have to notify. All of our bills, the medical places. This list goes on and on.”

Streets with the same names can prove problematic when merging two cities.

Fire Chief Mike Irwin said care could be delayed as first responders determine to which street they should go.

“We have to take steps to confirm by asking where they live and where they are,” said Police Chief Mike Peters of the department’s 911 dispatchers. “We need them to say ‘Springdale’ or ‘Bethel Heights.’”

For now, dispatchers put the letters BH behind the street names when the location is in the former Bethel Heights.

Peters said the department fielded about 20 calls from the former Bethel Heights area in the first six days after annexation.

Mayor Doug Sprouse wants to change the street would impact the least number of people, he said in the City Council’s work session Aug. 31.

The changes won’t be a problem with the U.S. Postal Service unless the ZIP code changes, said Kanickwa Johnson, a regional spokeswoman for the service.

“And you’ll probably have the same carrier,” she said.

Springdale traditionally names streets running north and south with the suffix of street. Those running east and west are avenues. But the city will suspend the rules to minimize impact on the residents whose street names receive a change, Christie said.

Changing street names isn’t unprecedented in Springdale. The city in 2017 renamed 56th Street to Gene George Boulevard in honor of one of the city’s poultry magnates, whose family owned the property on either side of the boulevard.

Bethel Heights, incorporated in 1969, never had its own post office, said Rachel Whitaker, a research assistant at the Shiloh Museum of Ozark History in Springdale. Mail delivered was addressed to Springdale with the 72764 ZIP code.

“The Post Office is one thing,” Christie said. “But we’re really concerned about 911 calls.”

Nine streets in Bethel Heights bear names similar, but not the same, to Springdale streets: