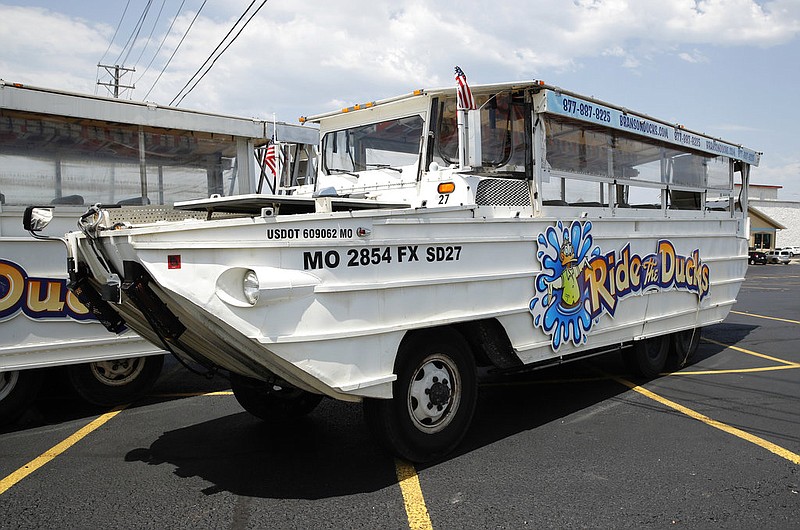 A duck boat sits idle in the parking lot of Ride the Ducks, an amphibious tour operator in Branson, Mo., in this July 20, 2018, file photo. (AP / Charlie Riedel )

A federal magistrate judge has recommended that criminal charges be dismissed against three men indicted over a duck boat sinking on a Missouri lake that killed 17 people two summers ago.

U.S. Magistrate Judge David P. Rush concluded Friday that charges should be dismissed because Table Rock Lake, where the boat sank in a storm on July 19, 2018, is not considered a navigable waterway under admiralty law, radio station KCUR-FM reports.

A 47-count indictment unsealed in June 2019 accused Curtis Lanham -- the general manager of the boat’s operator, Ride the Ducks Branson -- and Charles Baltzell, the manager on duty that day, with a variety of neglect and misconduct charges. An earlier indictment charged the boat’s captain, Scott McKee, with failure to properly assess incoming weather before launching the boat and not telling passengers to use flotation devices as weather conditions worsened.

Tom Bath and Tricia Bath, the husband and wife lawyers who represented Lanham, said in an email that the boat’s sinking was “a terrible tragedy.”

But they said they believed it “was caused by a once-in-a-lifetime storm and not as a result of actions or the failure to act on the part of Curtis or any other employees.”

Thirty-one people were aboard when the duck boat entered the lake. The storm came up suddenly, and the waves swamped the boat before it could make it back to shore. Fourteen people survived.

An Arkansas father and son -- Steve Smith, 53, and Lance Smith, 15, of Osceola -- died when the duck boat sank. Steve Smith’s daughter, Loren Smith, was among the survivors.