'Weird' Derby unlike any other 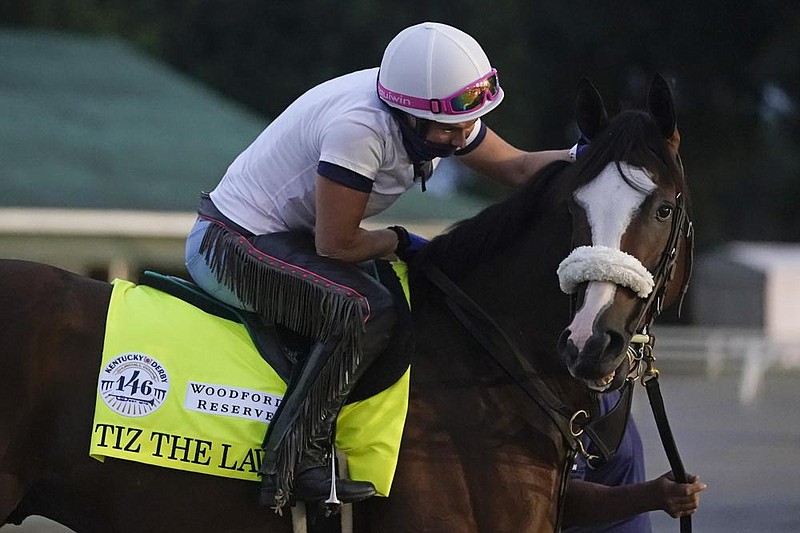 Tiz the Law, shown with exercise rider Heather Smullen this week at Churchill Downs in Louisville, Ky., is the 3-5 favorite to win today’s Kentucky Derby, making him the race’s biggest favorite in 31 years. (AP/Darron Cummings)

LOUISVILLE, Ky. -- Forget the mint juleps in souvenir glasses, men in seersucker suits and women wearing hats exploding in a floral frenzy. The Kentucky Derby still has horses -- Tiz the Law is the biggest favorite in 31 years -- but just about everything else makes the 146th edition unlike any other.

None of the cheering -- or cursing after losing wagers -- from 150,000 fans will be heard this year at Churchill Downs, where America's longest continuously held sports event will go on Saturday, four months later than usual. The track initially planned to allow 23,000 fans to attend until escalating positivity rates for covid-19 in Louisville dictated otherwise.

"Quietude can't hurt," said Barclay Tagg, trainer of 3-5 favorite Tiz the Law. "We've had quiet for almost all his races this year."

Of course, silence changes the very nature of the Derby, known for a mix of the raucous and refined, the freakish and fashionable.

Gone will be the parade of celebrities on the red carpet; the who's who of sports, politics and entertainment crowding Millionaires Row; and the national anthem sung by a big name. The University of Louisville marching band won't strike up "My Old Kentucky Home" while the crowd sings along as the horses step onto the track.

Tiz the Law has already won the Belmont Stakes, the kickoff to the Triple Crown that was run in June at a shorter distance. A victory in the Derby would set him up for a Triple try in the Preakness on Oct. 3.

Also in his favor is that he's already shown he can handle the Derby distance of 1 1/4 miles, often the biggest question for any 3-year-old colt. Tiz the Law won the Travers by 5 1/2 lengths over the same distance at Saratoga a month ago.

"He's checked all those boxes, and I believe he very well could win the Triple Crown this year," said Jerry Bailey, the retired Hall of Fame jockey and NBC Sports analyst.

Tiz the Law has won six of seven career starts -- his only loss came at Churchill Downs last year -- by staying close to the pace and making one big run at the top of the stretch.

"I'd like for us to be laying third all the way around until we get down for business," Tagg said. "You think he's gotten in trouble here, in trouble there, and next thing you know he's in front. He's a pretty amazing horse."

"He still has to have a clean trip," he said.

The field has been reduced to 16 horses, smallest since 2003 when Funny Cide won. That gelding was owned by Sackatoga Stable, which owns Tiz the Law. Managing partner Jack Knowlton and his co-owners will ride yellow school buses to the track, just as Sackatoga did 17 years ago.

Honor A. P. is the 5-1 second choice. His trainer is John Shirreffs and the jockey is Mike Smith, who teamed to win the 2005 Derby with 50-1 shot Giacomo.

"The odds don't guarantee anything," Shirreffs said. "We just have to see how the race is run."

Authentic is the third choice at 8-1. He's trained by Baffert, who also saddles 15-1 shot Thousand Words. A victory by either colt would tie the white-haired trainer with Ben Jones for the most Derby victories with six.

After Tiz the Law, Honor A. P. and Authentic, the other 13 horses are listed at double-digit odds. Churchill Downs is using a new 20-horse starting gate especially for the Derby, although posts 1, 18, 19 and 20 will be left vacant after King Guillermo and Finnick the Fierce were scratched.

A win by Tiz the Law would make Tagg the oldest trainer to win a Derby at age 82.

It will be the last Derby run on Lasix. Churchill Downs and the other Triple Crown tracks will ban the anti-bleeding medication starting next year. 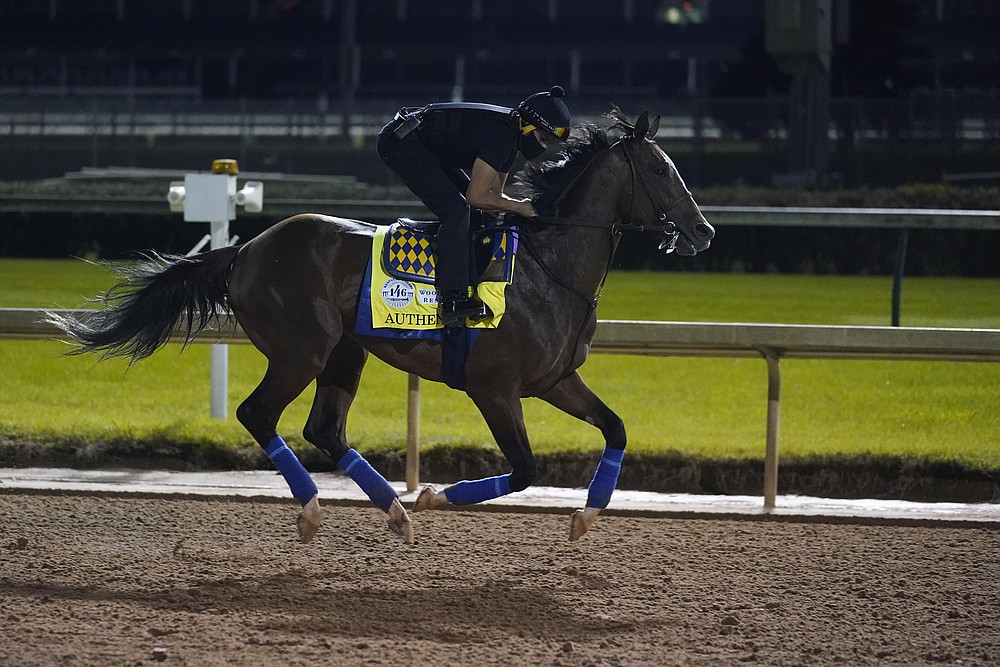 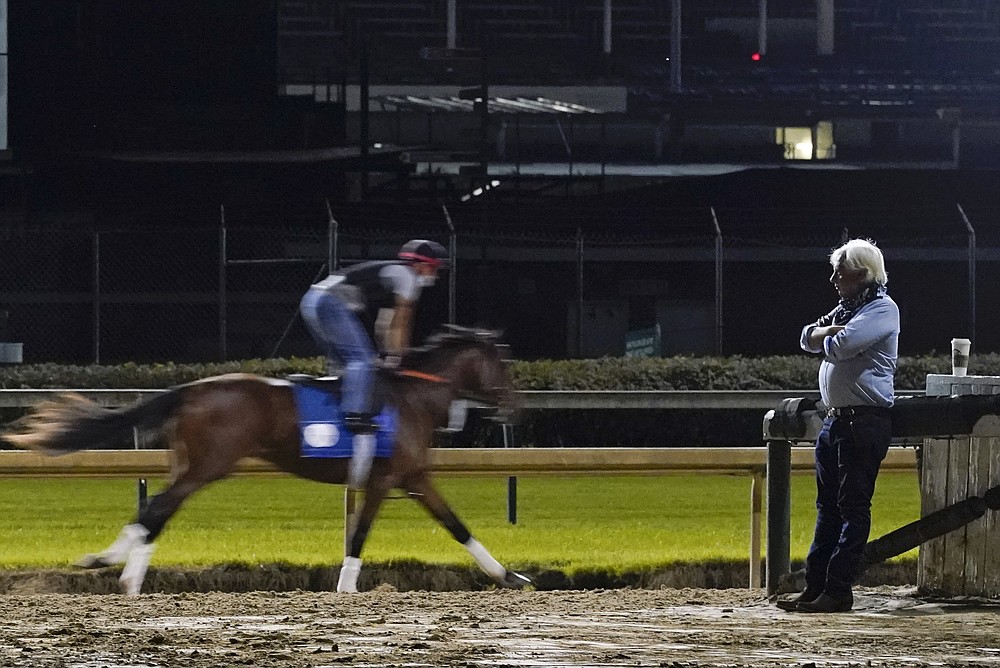 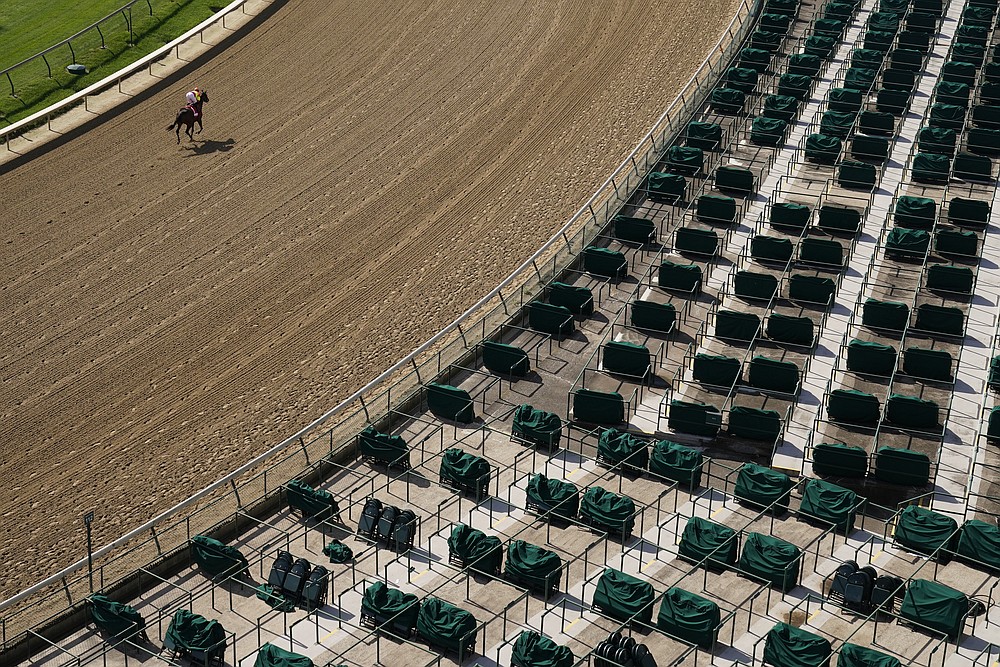 A horse heads to the starting gate for the first race of the day before the 146th running of the Kentucky Oaks at Churchill Downs, Friday, Sept. 4, 2020, in Louisville, Ky. (AP Photo/Charlie Riedel)