App's alerts to be grim reminder of bloodshed in Syria 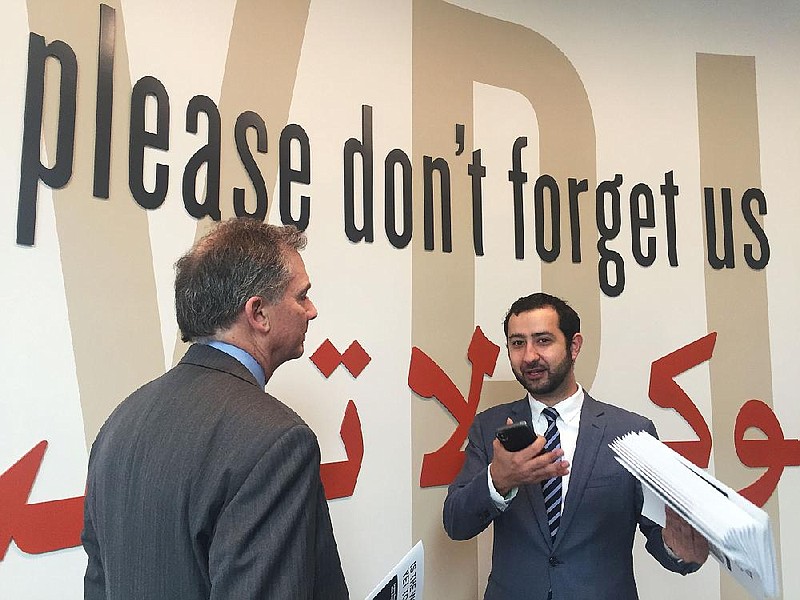 With the civil war in Syria in its 10th year, a charity with Arkansas ties is working to renew attention to the Middle Eastern nation's suffering.

A new app, which debuts this month, will be a regular reminder that the bloodshed has not ended.

The Syrian Emergency Task Force, which is led by University of Central Arkansas graduate Mouaz Moustafa, teamed with Metova, a software developer, to come up with the new alert system.

The app "provides real-time information on attacks launched" against civilian targets, but "does not provide political commentary or any broader analysis of the conflict," it notes.

When an alert is issued, it is classified as either medium, high or critical, depending on the level of violence. It also is categorized based on the type of weaponry that has been deployed.

It includes a map showing the precise site of the attack as well as a description of what has occurred.

A recent "Barrel Bomb" medium alert stated: "A bomb blast car exploded near the Turkish military base in Sallat Al-Zohour in Jisir Al-Shogour [to] the west of Idlib City."

A "Fixed Wing" critical alert described another attack. "Civilians were injured in a Russian airstrike that targeted a refugee camp near Sheikh Bahr north of Idlib." The source of the news, the report said, was "eyewitnesses and the Syrian Civil Defense" -- a search-and-rescue force known as the White Helmets.

The task force has frequent contact with people living in the affected areas, Moustafa, the task force's executive director, said.

"It's an indigenous network on the ground that is monitoring what is happening, so we know almost in real time when a plane's taking off from the Russian base or when a barrel bomb drops somewhere," he said.

"All of these attacks being reported are attacks specifically on civilian targets. We're only [alerting] when men, women, children [and] elderly are being bombed by chemical weapons or being threatened with detention, displacement or death at the hands of regime troops or Russian air force [jets]," Moustafa said.

Since its debut in 2011, the task force has highlighted atrocities by the regime of Syrian President Bashar Assad.

When the Syrian Emergency Task Force needed to create an app, it turned to Metova for help.

Originally based in Franklin, Tenn., Metova opened offices in Conway in 2014 and Fayetteville in 2015. Although it has additional teams in Dallas and Guadalajara, Mexico, its largest presence is now in Arkansas, officials said.

It's the type of project the company occasionally does "for the common good," rather than for profit, Sasse said.

"When these opportunities come up, we look for volunteers inside our organization -- developers, designers, project managers, strategists -- that understand what the task at hand is and what we're trying to do," he said.

Company employees volunteered, doing much of the work on nights and weekends.

"It took about four months, I would say, from start to finish," Sasse.

Versions were completed for both Android and iPhone.

The result was an app Sasse described as "fairly elegant and pretty powerful."

When alerts about barrel bombs and artillery strikes are going out, "it's a very harsh reminder of how challenging some parts of the world are," Sasse said. "Our days may seem difficult but when you've got this app installed and you're getting those alerts, it's a clear reminder that there are a lot of people in the world that have it much more difficult."

For Moustafa, Syria is more than just a place on the map.

Born in Damascus, Moustafa immigrated to the United States when he was 12; his family settled in Arkansas.

He attended junior high in Fort Smith, high school in Hot Springs and college in Walnut Ridge and Conway.

In 2008, after graduating from UCA, he headed to Washington, interning with then-U.S. Rep. Vic Snyder before joining the staff of then-U.S. Sen. Blanche Lincoln.

As citizens in the Arab world rose up against authoritarian regimes, Moustafa shifted his focus to advocacy.

The Syrian Emergency Task Force opened its first office in Washington, D.C., but later added an Arkansas office, which has boosted humanitarian efforts.

With backing from Arkansas donors, the group helped start the Wisdom House Project, which opened a kindergarten in Idlib province, and a women's center, called Tomorrow's Dawn.