ASU allows game to slip away in 3rd 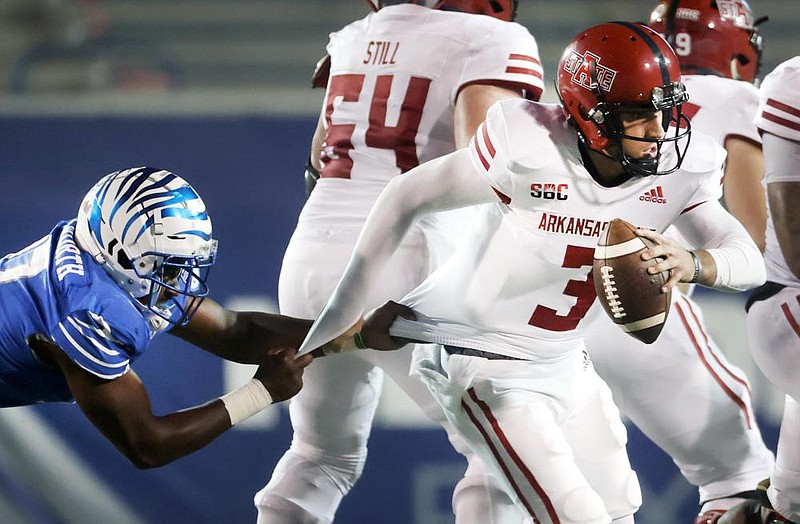 MEMPHIS -- Facing a fourth and 4 from the Memphis 11 early in the third quarter, Arkansas State University Coach Blake Anderson had a decision to make: Go for it and try to tie the game with a touchdown, or take the points with a 28-yard field.

An unsuccessful surprise onside kick by ASU helped Memphis respond with a quick touchdown, then a Red Wolves fumble led to another Memphis touchdown. In the blink of an eye, Arkansas State went from down 21-17 to trailing 34-17. And the Tigers made the margin stand, beating the Red Wolves 37-24 on Saturday night at the Liberty Bowl.

Arkansas State (0-1) came out of the gate hot, with junior quarterback Logan Bonner leading the Red Wolves on a 12-play, 75-yard drive on the opening possession that was capped with a 1-yard touchdown run by junior running back Ryan Graham.

Memphis responded with its own touchdown, but a 1-yard touchdown run by ASU sophomore running back Isaiah Azubuike gave ASU a 14-7 first-quarter lead. But Memphis scored on its first and last possessions of the second quarter while holding ASU scoreless to take a 21-14 lead into halftime.

Then, the third quarter happened. 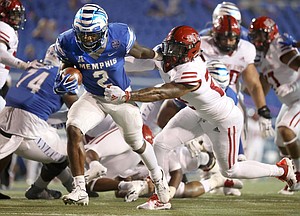 Photo by Joe Rondone/The Commercial Appea
Memphis Tigers running back Rodrigues Clark stiff arms Arkansas State defender Caleb Bonner on his way to the endzone for a touchdown during their game at Liberty Bowl Memorial Stadium on Saturday, Sept. 5, 2020.

Sophomore safety Detravion Green had one of Arkansas State's few bright spots in the quarter, intercepting Memphis quarterback Brady White on the third play of the second half. But a crucial drop by senior wide receiver Dahu Green and a sack of Bonner forced the Red Wolves to settle for three points.

Arkansas State attempted to surprise Memphis on the onside kick, but no Red Wolf came close to recovering the ball as Memphis was set up at the 50, then scored seven plays later. Junior tight end Reed Tyler fumbled on the next possession for ASU, giving Memphis great field position at the ASU 47. Memphis scored six plays later for a 34-17 lead.

In less than six minutes, Arkansas State had lost all momentum gained from Green's interception.

Bonner found sophomore tight end TW Ayers for a 1-yard touchdown midway through the fourth quarter, but the third quarter hole proved too much. ASU was stopped on fourth down deep in Memphis territory with under two minutes later to end it.

Arkansas State's secondary struggled Saturday, allowing White to throw for 275 yards and four touchdowns. Memphis was especially good on third down, completing 9-of-16 attempts and earning 29 total first downs. The Tigers had 502 total yards -- 275 through the air and 227 on the ground.

On offense, the Red Wolves were inconsistent at times, going 6-of-15 on third downs and turning the ball over three times. Bonner, who played eight of ASU's 12 drives, was 14-of-23 throwing for 133 yards, one touchdown and two interceptions. Sophomore Layne Hatcher also saw the field, going 13-of-20 with 166 yards. Running backs Jamal Jones, Isaiah Azubuike, Ryan Graham and Lincoln Pare combined for 145 yards on the ground.

Arkansas State will have another tall task next week when it travel to Manhattan, Kan., to face Kansas State at 2:30 p.m. on FS1.