Buffalo circus: Smallmouths on vacation, but revelers put on a show 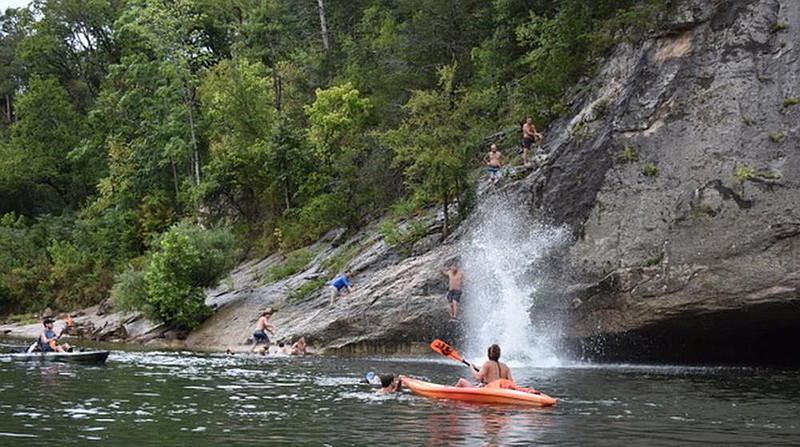 Revelers leap off a bluff into a deep hole Aug. 29 on the Buffalo National River at Grinders Ferry. (Arkansas Democrat-Gazette/Bryan Hendricks)

I've never seen so many people on a river, and while the fishing was bad, the human circus was well worth the price of admission.

The venue was the Buffalo National River between Tyler Bend and Gilbert on Aug. 29. After months on injured reserve, Rusty Pruitt of Bryant was eager to fish, and we considered our choices for a float fishing day trip. Pruitt wanted to fish Crooked Creek. Its water was low, but for fishing we like it that way.

Complications emerged early when we discovered the difficulties in procuring a canoe and shuttle on such a busy day. A call to our usual outfitter on Crooked Creek went to voice mail, and we feared she might have already closed for the season. Nearing Marshall, we chose Door No. 1, the Buffalo River.

Because of the coronavirus pandemic, one no longer shows up at an outfitter and rents a boat and shuttle on a whim. One must reserve a time, and some outfitters require advance reservations.

On the lower Buffalo River, outfitters rented canoes for only the 4-mile float from Spring Creek to the Arkansas 14 bridge. The last slot was for 1 p.m. A short float on one of the poorest stretches for fishing did not inspire us.

The next call was to Buffalo River Outfitters at Silver Hill. They offered an 8-mile float from Tyler Bend Recreation Area to Gilbert, and they had an opening.

Entering the Buffalo River Outfitters shop is forbidden. Instead, two long lines formed outside. One was for last names A-M. The other was for N-Z. With the temperature in the low 90s and the humidity in the same neighborhood, I joined a throng from Texas, Missouri, Louisiana and Oklahoma. That side of the building was exposed to full sun and biting flies.

The operation was as precise. A lady at a folding table gave me a sheaf of papers and a plastic card to put on my fob. Then she secured the fob to the papers with a rubber band.

"Without this card, we will not be able to shuttle your vehicle," she said. "When you get to Tyler Bend, you'll see a canopy. Give these papers to the guy under the canopy. Pick a canoe, and your vehicle will be waiting when you get to Gilbert."

As I started my truck for the descent down the hill to Tyler Bend, my phone rang. It was our Crooked Creek outfitter. Pruitt and I briefly considered eating the Buffalo River expenditure and continuing north, but common sense and fiscal responsibility prevailed.

I have seen the Buffalo River crowded on Memorial Day, Fourth of July and Labor Day weekends, and I have seen the Spring River in its most decadent infamy. I believe the Buffalo on Aug. 29 topped them all. The parade of paddlers was endless.

The first stop was the big cliff jumping hole at Grinders Ferry, a few hundred yards downstream of the Arkansas 65 bridge. People were almost elbow to elbow at the gravel bar, and a line ascended the jumping bluff. The lowest level is what I call the "Bunny Slope." It's a tame jump off to the side of the higher jumps. A second level is about 25 feet high. Another level is about 45 feet high. The highest ledge is 75 feet, according to a guy that measured the height with a drone. When you reach the top two levels, there is no turning back. It's too steep and too slick to descend by foot, and if you lose your nerve, a gallery of revelers on the water will jeer and heckle mercilessly.

Amid raucous cheers, jumpers made some tremendous splashes, but one young lady awed everybody with an Olympic quality back flip from one of the middle ledges.

"She didn't even make a splash!" said one astonished onlooker.

She surfaced to a roaring ovation. Ignoring the applause, she slicked back her hair like Bo Derek in "10" and strode back to her canoe.

Observing couples in canoes is a fascinating study in relationship dynamics. Paddling a canoe requires a level of teamwork and communication that some couples simply do not possess. Alcohol rends their rifts wide open.

One couple was a sterling example. We heard the woman berating her companion, and he responded to all of her insults by belching.

"I've never seen nobody as slow as you!" she said. "Somebody that's as slow as you are in a canoe is just as slow on land, if you know what I mean!"

They passed us and disappeared behind a big rock. We heard a commotion. The tone of the voices rose a couple of octaves, as did the level of vitriol. Then they emerged from behind the rock, both in the water towing a capsized canoe to shore. There was nothing that should have caused a tump, and I suspect it was sabotage, an act of toxic masculinity.

After righting the boat, the man was still waist-deep in the water. The woman marched back into the water -- index finger outstretched -- to get in the guy's face, but she tripped. Instead of catching her, the guy stepped aside, and she went under. He didn't help her up, either.

The woman didn't notice us laughing, but the man did, and he knew they deserved it. He just shrugged stoically. Soon they were adrift again. She paddled, and he swam behind. Several people offered him a ride, but he declined.

"Sure is a nice day for paddling," someone said, trying to break the tension.

"It is when you're not getting your butt chewed," the swimmer deadpanned.

Eventually they stopped at a gravel bar.

"Let's give them some privacy," I said. "All will be forgiven in about 30 minutes."

And it was. Pruitt and I were fishing a riffle when they came around a bend, happy and chatty. At the top of a riffle was a rock and a rootwad that had already tumped two boats.

"Everything that dude has worked for is about to come undone right here."

They made it without a hiccup. The woman threw her arms up in victory, looked at me and yelled, "We made it!"

Then, she turned to her companion and said, "Hey, that guy is videoing us!"

"I don't think he got what he was looking for," the guy said, amused. "He wanted us to flip."

She flashed me a middle finger salute, which sent Pruitt and me to the ground in a fit of laughter.

Hey, this is supposed to be a fishing story. We caught eight little smallmouths, all on Zoom Tiny Lizards with 1/8-ounce weights. The biggest was about 12 inches.

"Fishing would have better on The Creek, but I wouldn't have missed this spectacle for anything," Pruitt said. 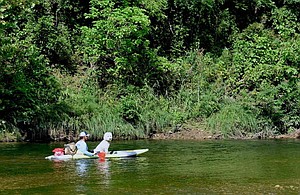 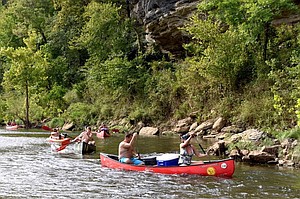 An endless procession of paddlers filled the Buffalo National River on Aug. 29 between Tyler Bend and Gilbert. (Arkansas Democrat-Gazette/Bryan Hendricks)
ADVERTISEMENT