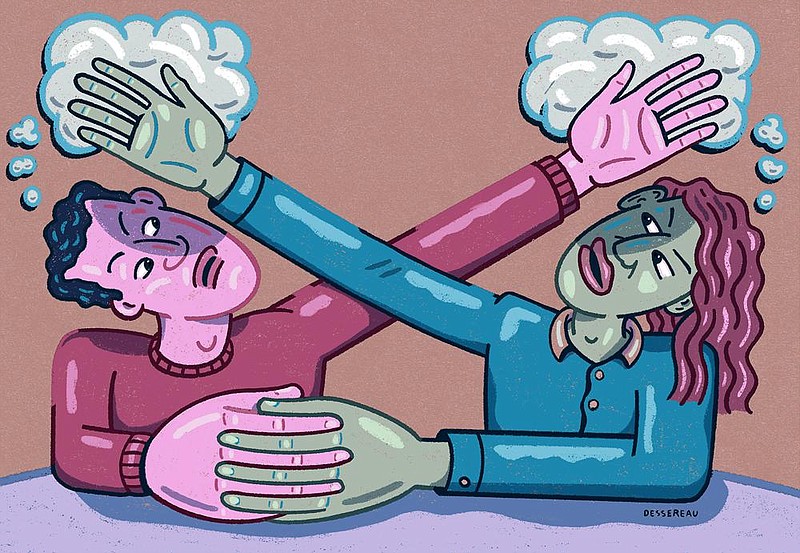 The presidential race is in full swing, and more couples (some on the left, some on the right) are nding themselves ghting about politics. (The New York Times/John P. Dessereau)

Julie Sanchez, a business operations consultant in Orcutt, Calif., recently celebrated her 15th wedding anniversary -- a milestone that she wasn't sure she would hit, given the recent strain politics has brought to her marriage.

"There's a giant elephant and a giant donkey, and they're both in the living room," was how Sanchez, 59, a registered Democrat, described the situation.

Sanchez and her husband, a Republican and straight-party voter, had never discussed government affairs when dating, and early in their marriage they were too busy raising three children to make such debates a priority. "It actually never became a bone of contention until the 2016 election," she said.

Lately it has become increasingly difficult for them to converse without discussions turning contentious. "Frankly, I try to avoid it, because it's gotten to the point where there is no reasonable conversation and it's quite painful," Sanchez said. And so they have banned political speak at home -- "because it's so charged," she said -- but with the approaching election constantly in the news, once forbidden topics have become impossible to evade.

For many couples, fighting about politics has become more common. Since President Donald Trump's election, Ken Jewell, a New York divorce lawyer, has had clients in his office regularly ranting about their partners' outlooks on initiatives like Black Lives Matter.

"Before that, it never really became much of an issue because you didn't have the divisive candidate," he said. And while people aren't citing political differences as the sole reason for divorce, the topic is certainly compounding matters. "Presidential years are typically very quiet for divorces because of the uncertainty of the presidency," Jewell said. "This year, it has been beyond insane."

BREAK UP OVER POLITICS

In June, Jeramiah Dempsey, 41, a cybersecurity professional in Charleston, S.C., broke up with his girlfriend, citing politics. She is a liberal, while he identifies as extremely conservative.

"I always thought that I'd never have an issue with dating somebody who believes differently from me," he said. "But the last four months, it's been tough to ignore." The two had disagreed on everything from recent Supreme Court rulings to the handling of the pandemic. Dempsey said he was open to hearing opposing viewpoints, but that his former girlfriend wasn't willing to engage.

"I'm a San Francisco 49ers fan and she sent me a picture of a Niners mask and said, 'I have to get you one of these,'" he said. Dempsey said he replied, "I'm not going to wear a mask. It's not going to work." "Why don't you think that?" he said his girlfriend responded. But before he could text back, the conversation was squashed with "nevermind."

Pat Pierson, 72, a retired staffing executive in Denver, parted ways with her boyfriend of 12 years over conflicting opinions on the Trump administration. She's more liberal and he's conservative, but their views weren't an issue before Trump. "He even voted for Obama," she said. "But boy once Trump came in, I saw things change and it just got to be something that wasn't working."

They fought about immigration and the repeal of DACA, a program that had protected young immigrants. The breaking point came when local restaurants were given permission to open for inside dining and Pierson said she only felt safe outdoors. "He got very angry with me and said how ridiculous that was and how the economy was going to be wrecked," she said.

Political polarization has become such a problem that Maureen Tara Nelson, the owner of New York and Florida-based MTN Matchmaking, says her clients are requesting to only be paired with people who have similar political views. "My motto in the past was 'work together and agree to disagree,' but it has gotten to the point where people hate the other political side," she said. "And if they hate them, how could they date them?"

In years past, Nelson noted, singles wanted partners who were attractive, intelligent and successful. Now, finding someone politically compatible is non-negotiable. And even when she has tried to get clients to look past politics, Nelson admits that it has backfired. She recently set up a party-indifferent celebrity client on a virtual date with a Republican. "She calls me after and says, 'I could never go out with that guy again. It was awful! Trump this, Trump that,'" she said. "I said, 'But remember you were open. She goes, 'No! We have to change that.'"

In 2018, Bumble implemented a feature allowing singles to share their party preference with potential matches. Priti Joshi, vice president for strategy at the dating app, said that 40% of the platform's domestic clients now use it.

Some 84% of the singles using Dating.com won't even consider dating someone with opposite political views, said Maria Sullivan, a vice president at the dating website. In the third quarter, she said, the site has seen a 51% increase in searches for matches by political party. And OkCupid's global communications manager Michael Kaye says the platform's political screening questions have been answered more than 100 million times.

Maggie Sargent, 41, a YouTuber and film producer in Los Angeles, is a Trump supporter looking for a conservative partner. "I have tried to date Democrats for the past four years, mainly because working in entertainment that's basically all you find, but it always ends badly," she said. "So lately I've been running from the lefties in my life."

Megan Schmidt, 25, a senior account executive in Brooklyn who identifies as "pretty far to the left," has been running away as well. She said she walked out on a date after learning that she had swiped right for a Republican. "I excused myself and went to the restroom, took a deep breath and bolted for the door," she said.

And then there are those whose relatives have insisted they date within family party lines, like Christina Mullins, 42, a legal assistant in Tulsa who grew up with a strict Republican father.

"He put a clause that I would be written out of his trust if I married a registered Democrat," she said, joking that yes, this does significantly limit her dating pool.

These attitudes are behind a growing number of dating services dedicated to helping people on both sides of the aisle find inner-party love. DonaldDaters.com, whose slogan is, "Make America Date Again," promises, "the RIGHT person is out there." And Salvator Prano, who created LiberalHearts.com in 2002, deems his website more popular than ever.

"Through 16 years of Bush and Obama, most partisans found a way to tolerate friends and family of different political persuasions," Prano said. But this time, he said, it's more about the man than the party.

"A few weeks after Trump took office, a member wrote in her profile, 'I divorced my husband. He voted for Trump!' That's a whole new level of political polarization."

OUT OF THE BEDROOM

Some couples have found ways to keep contrasting politics out of the bedroom.

Jenny Farley, 42, a library assistant in Williamsburg, Va., said that Hillary Clinton losing to Donald Trump "dredged up a lot of issues" within her marriage. "The election was in November, I think we were in counseling by January," she said.

For every liberal opinion Farley has, her husband spouts the opposite. "I remember having this existential crisis: Does this mean he's a terrible person? Is this how I want to raise my children?" But working on their communication through counseling helped the couple realize that family comes first and they can't change each other.

Susan and Nelson Peacock of Rogers, who have worked across party lines -- she for the George W. Bush administration and he for the Clinton and Obama administrations -- have also figured it out.

"We don't shy away from those conversations, but have mutual respect for each other's perspective," said Nelson Peacock, 51, the president and chief executive of a nonprofit organization. Their biggest issue: Fox News versus CNN. "Nelson refuses to watch Fox News so we end up taking turns or watching in separate rooms," said Susan Peacock, 42, a communications adviser.

Then there are those who seem to bond over the bickering, like Wende Thoman and William Sterns, both 72. When it comes to politics, the Delray Beach, Fla.-based couple disagrees on most things.

A typical argument, Thoman said, is "I say he's wrong and he says I'm wrong. Sometimes voices are raised. And then we have dinner!" In recent years, their political differences have become more frequent. "But this is the sport we've engaged in for a long time," Thoman said. Sterns actually enjoys the banter: "Politics should be fun!"

A LAYER OF PASSION

Differing opinions can add a layer of passion to a relationship, said Susan Trombetti, a matchmaker based in Washington. "You don't want a carbon copy of yourself because it would be boring," Trombetti said, adding that she tells clients "if Mary Matalin and James Carville can find love together, you shouldn't narrow your options." She warns that refusing to cross party lines could weed out viable candidates.

A relationship with diverging views can be successful, but only if a couple can learn to discuss their opinions without demeaning each other, said Maya Ezratti, a dating coach based in South Florida. She advises partners to leave extreme viewpoints out of the home. "Love trumps politics when you're relationship oriented," she said.