Ex-homeless drug user reforms, creates a scholarship for others 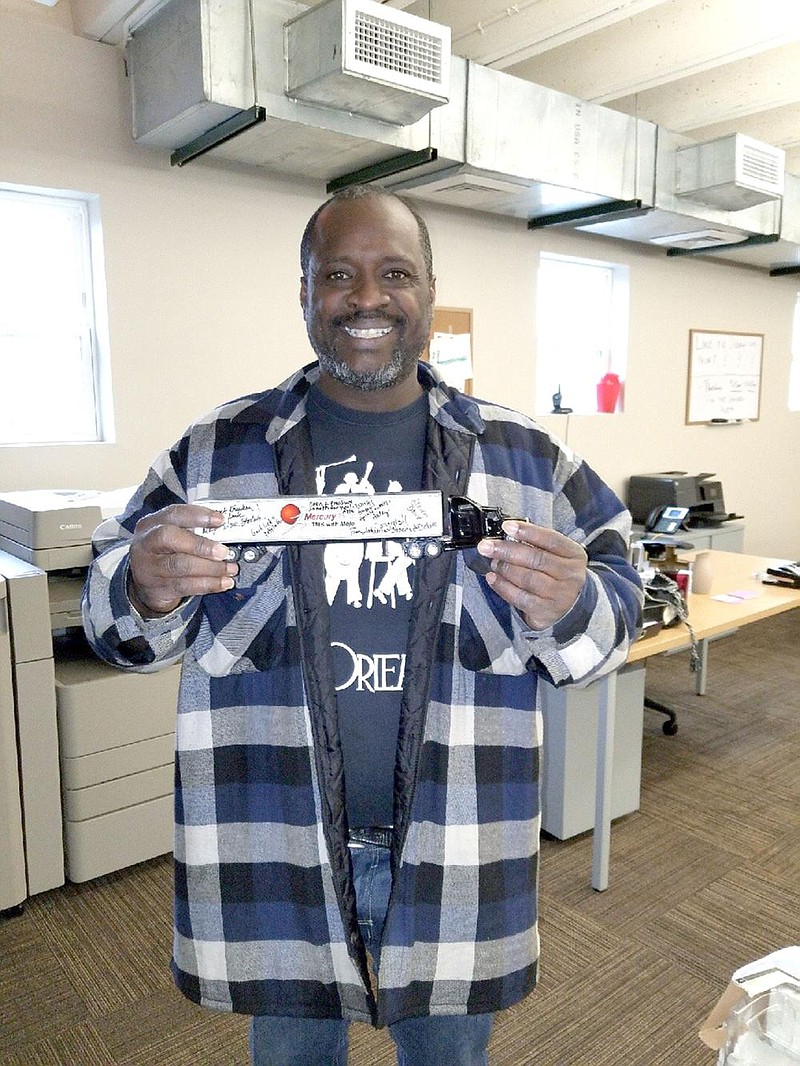 When Derrick Clark was 12 years old, he attended Sunday School during which the teacher told the class to take courage and seek Jesus in times of trouble. Clark, street-smart well beyond his years, laughed.

"They asked me what was so funny and I told them that's all good, but what takes courage is to break into someone's house, knowing if you get caught, you're going to get shot," Clark recalls. "I was 12 years old with that mind frame."

Clark shakes his head at the memory. The Little Rock native is doing great now, happily driving a truck for U.S. Xpress in Houston and has even launched a scholarship to help others. But along the way, he'd have to clear some substantial hurdles to get his life in a positive direction.

"I'm a projects baby. My value system wasn't that good because I wasn't taught not to steal, I was taught not to get caught," Clark says. "When I did get caught, I got in some serious trouble that could have put me in the juvenile home. That's when I moved to my Uncle Mike's, who taught me some values. I didn't understand them at the time, but he gave me my work values."

Clark's late uncle, Michael Flowers, lived in the country and he put his troubled nephew to work outside. The gesture planted a seed, but it would lie dormant for years, during which time Clark returned to the law of the streets. He eventually wound up homeless and using drugs, a period he recalls as a low point, but also one which provided a fresh start.

"When I became homeless, things became very hopeless for me. I was out there for a while," he says. "First good decision I made to turn my life around was hanging out at Jericho Way [Shelter in Little Rock]. People started coming into my life and having a belief in me that I could do more than what I was seeing. Then I start believing in myself."

During this time, city leaders were seeking input from the homeless community about life on the streets and how to address it. Clark was one who stepped up to give a first hand account of being homeless in Little Rock.

"It was also terrible because in my homeless crowd I got ridiculed so bad that some days I just didn't want to do that no more. I caught a lot of conflict on the street, even name-calling like Uncle Tom, Uncle Remus, Uncle Rufus."

Whatever grief he got, Clark was impressing city leaders, among them Director Kathy Webb and City Manager Bruce Moore.

"Derrick was very valuable," Moore says. "When you get that input firsthand, it truly makes a difference. It's eye-opening; sometimes it can make you feel really inadequate in how we're dealing with the homeless population."

With the encouragement of Webb, Moore and the staff at Jericho Way, Clark continued his slow march to self-subsistence.

The pace was frustrating, stuck in minimum wage jobs, until one Christmastime gig turned things around.

"Salvation Army gave me a job ringing bells in Maumelle," Clark says. "I was ringing the bell and God told me if I didn't take any of these people's money -- not saying that I would have, but a lot of other people were taking the money -- that he would bless me with work."

"Right after that holiday season was over, Arkansas Workforce came to Jericho Way and God opened all the doors for me to get over every obstacle to become a truck driver."

In 2017, Clark began driving for New Age Distributing, a local 7UP distributorship.

He was making progress but wasn't entirely out of his old mindset and bad habits caught up to him. Seeking a change of scenery, he moved to Houston where he had difficulty getting started.

He was living in a homeless shelter, praying for an opportunity, when he dialed a wrong number that reached a trucking company that hired him.

Since then, Clark has completed rehab and works to continue his progress. He's driving steadily, earning enough to support himself without government assistance.

It was a happy ending, but not wholly satisfactory until he called Webb back in Arkansas with an idea to start a scholarship fund that would help another person attend trucking school.

"Inside all of us is the inner child that wants to be good and sometimes that inner child is corrupted by environmental factors, like I was," he says.

"But there's always hope for that inner child to come out and blossom like he or she should blossom.

"The thing is, they need an opportunity. That's what this is, the opportunity to become fully what they need to be -- productive in society, productive with their family members."

Clark put up $1,000 to launch the project and with the help of his old allies, the fund was quickly placed with the Arkansas Community Foundation.

The J.C. Thompson Trust agreed to match every dollar donated up to $10,000.

"Once you hear the story, it's hard not to want to help," Moore says.

"This scholarship symbolizes an individual who fell on hard times, but never gave up. It wasn't easy, but [Derrick] knows what it takes to get back to where you want to be. I think he will have the opportunity to make a difference in so many lives that he doesn't even realize it."

Clark, 51, now takes college classes and dreams of writing a book about his journey. He's excited for the scholarship's potential, even if most recipients won't know who's behind it.

"They wanted to name this the Derrick Clark Fund," he says.

"Most of my heroes are very humble people and I want to remain humble, so I came up with the name Paul Philia Scholarship. Paul means 'humble' and philia means 'brotherly love' in Greek. So, when you break it down it is called 'humble brotherly love.'"

Individuals interested in applying for the scholarship are urged to attend information sessions scheduled for Thursday, Sept. 24 at Robinson Center in Little Rock. Sessions will be held at 11 a.m. and 6 p.m., as well as online.