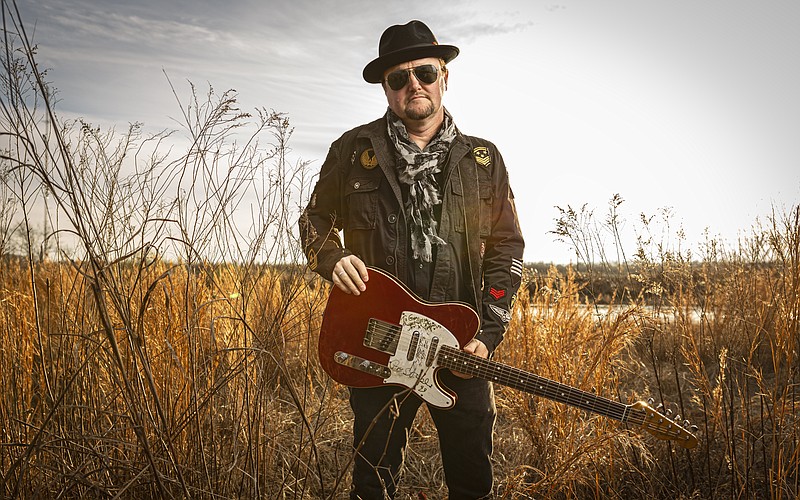 Pangburn native Greg Spradlin has been making music since he was in his teens. His album, “Hi-Watter” by Rev. Greg Spradlin and The Band of Imperials, was recorded in 2012 and finally released in July. (Special to the Democrat-Gazette/Rett Peek) ( Rett Peek )

In 2010 Pete Thomas, the drummer for Elvis Costello's bands The Attractions and The Imposters, was in Little Rock to record some songs with Indy Grotto, wife of producer Jason Weinheimer, for her solo album.

While Thomas was here, Weinheimer encouraged Greg Spradlin, the singer-songwriter-hotshot guitarist and longtime Arkansas musical stalwart, to come jam with the British drummer.

That session was a life-changing one for Spradlin, though he didn't know it at the time.

"I thought, yeah, I could spend a day with him," the 51-year-old Spradlin says. "I had about three songs. That's probably all we could get done anyway."

He admits that he was expecting something more laid-back, but Thomas — who not only drummed on legendary Costello albums like "This Year's Model," "Get Happy," "Armed Forces," "Imperial Bedroom" and more, but is also an in-demand studio drummer who has played with Randy Newman, Sheryl Crow and others — had a different approach.

"He's a perfectionist, and it goes really quick," Spradlin says. "We got through those three songs before lunch."

There was an undeniable chemistry, and that informal jam started Spradlin on a musical trip that would take him to Los Angeles to record with, among others, Thomas, Los Lobos founding member David Hidalgo, the late keyboardist Rudy Copeland and bassist Davey Faragher of Cracker and The Imposters.

The long-gestating album, "Hi-Watter," by Rev. Greg Spradlin and The Band of Imperials — a raucous celebration of hip-shaking rock, soul, blues, R&B and gospel — was finally released July 17.

Produced by Weinheimer, the album opens with "Gospel of the Saints," a funky, soulful strut propelled by Thomas' martial snare and Copeland's Hammond B-3 organ. "Hell or Hi-Watter" is a vicious, fun slice of Southern rock; "I Drew Six" chugs like a super-charged freight train and "Go Big" sounds like the world's most perfect opening theme to every NFL broadcast ever. "The Maker," which closes the album, is a sludgy, brooding ballad that evolves into an almost psychedelic workout with Spradlin and Hidalgo both locked in and wailing on guitar.

Spradlin and crew make this all sound new and fresh. This isn't Blueshammer from "Ghost World"; it's all the greasy good bits of Stax, Muscle Shoals and Saturday-night-juke-joint-meets-Sunday-morning-reckoning and played in a way that would make the late producer-musician-raconteur and Arkansas

Weinheimer calls Spradlin a "singular artist. What he does is uniquely Greg. He's known around here as a guitar player, but his songwriting is every bit as unique and special. It's steeped in gospel, R&B and Southern rock in the best way."

Spradlin has been making music most of his life. He grew up in Pangburn in White County and as a teenager was playing guitar and gigging with bands in bars, V.F.W. clubs and American Legion halls around Central and north-central Arkansas.

"It was really kind of my high school job," he says. "All my friends were working in fast food, and I was making more money than them. But I was playing four or five hours in the middle of the night to a bunch of drunks. I saw it as my education. I was serious about being a professional musician before I could even drive."

Right after graduating from the University of Arkansas at Little Rock, he was recruited to go to Los Angeles and join a sort of prepackaged Southern rock band (it was the early '90s, The Black Crowes were huge and music-biz types were keen to cash in).

Warner Bros. was interested and Spradlin heard Glyn Johns, who worked with The Rolling Stones and The Who, wanted to produce the record. It was all very heady stuff.

"This was shaping up to be a big deal," he says. "I moved to L.A. off and on for a year. The idea I was pitched was that it was going to be like The Band. That's all I had to hear."

It did not turn out that way.

In 1992, the group was on the cusp of a deal with Warner Bros. when it all came crashing down.

"The day we did our showcase for Warner Bros., all of the executives came to town from all over the world. But that was the meeting when Warner Bros. announced to their staff that they were putting a signing freeze in place and they had to cut their rosters or they'd get fired.

"Then they came to see us play. We didn't know what had happened, but it was the hardest room I'd ever played in my life. Total silence, like a big rock show in a vacuum."

Spradlin returned to Arkansas to recover and start anew.

He formed an alt-country band called The SkeeterHawks, which gained some traction and got signed to what turned out to be a shady West Coast hip-hop label.

The SkeeterHawks recorded an album in Little Rock that the label wanted to re-record in L.A. (ominously, at the same building where the ill-fated Warner Bros. showcase went down).

"It was terrible," Spradlin says of the experience. "We made a record under duress and it was terrible. The record company never really existed, and after we left the studio they disappeared and we never heard from them again. We never got paid, and to this day I don't know what happened to them."

After that fiasco, Spradlin began a retreat from the music industry.

He took a job with Heifer International and got to "see the world and help some people along the way," he says.

Spradlin now is a consultant for nonprofits. He and his wife, Robin Friday, have been married 19 years and have two children, ages 8 and 14. They also own the video production company Camp Friday Films.

And music has always been around. He recorded "... And Twiced as Gone," in 2003 with The Greg Spradlin Outfit, which included ex-SkeeterHawk drummer Doug Simpson and bassist Scott Finney with contributions from Dickinson.

"Jim Dickinson had been talking for years about the record I needed to make," says Spradlin, an ordained minister in the Unitarian Universalist Church who gave the eulogy at Dickinson's 2009 funeral. "He was an endless source of inspiration and encouragement. His big deal was you've got to have the right band."

Enter The Band of Imperials. 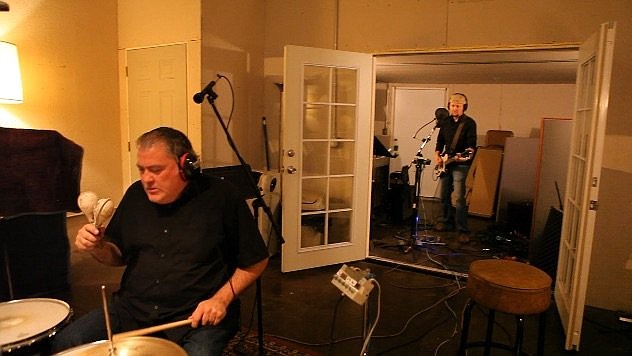 While jamming with Thomas in Little Rock, Spradlin mentioned his fondness for Copeland, the blind keyboardist who played on Solomon Burke's 2002 album "Don't Give Up on Me."

Thomas contacted Joe Henry, who produced "Don't Give Up on Me," got Copeland's information and sent it to Spradlin that night. It was obvious the drummer wanted to keep making music with Spradlin.

"Jason said, let's not let this opportunity go by," Spradlin says. "I told him to book it and let's jump off the cliff and see what happens. That's how this record came to be. It turned into one of the coolest music experiences I've ever had in my life."

Spradlin — who does a fair imitation of Thomas' English accent — and Weinheimer traveled to Los Angeles and began recording.

Thomas had played on Los Lobos' albums "Kiko" and "This Time" and asked Hidalgo to play bass on Spradlin's session.

"He was only supposed to play on a couple of songs, but he ended up staying the rest of the night," Spradlin recalls. "He was like, what else ya got?"

Hidalgo, who plays guitar and sings in Los Lobos, is a longtime hero of Spradlin's.

"In my opinion, he's one of the greatest guitar players alive," Spradlin says. "He's got this musical sense that just oozes out of him. If you listen to the bass lines on 'Hi-Watter,' no other bass player would approach playing them the way he's playing."

Hidalgo transforms the somewhat simple, country bass parts into "funky, melodic things that only a guitar player would play, and they work so well," Spradlin says.

"He told me that we must have listened to the same music growing up," Spradlin adds. "I told him, yeah! Yours!"

Weinheimer says the admiration was mutual.

"I quickly discovered that David was as big a fan of Greg's as Greg was of David."

Playing with Copeland, who died in 2018, "was the closest thing I feel like I could ever be to someone like Ray Charles," Spradlin says. "He had that level of musical, 3D ability, perfect pitch and energy."

It was an overall collaborative process, Spradlin says, noting that Thomas worked on "Go Big" even after the sessions were over.

"He made the whole thing come together," Spradlin says. "He is a machine." 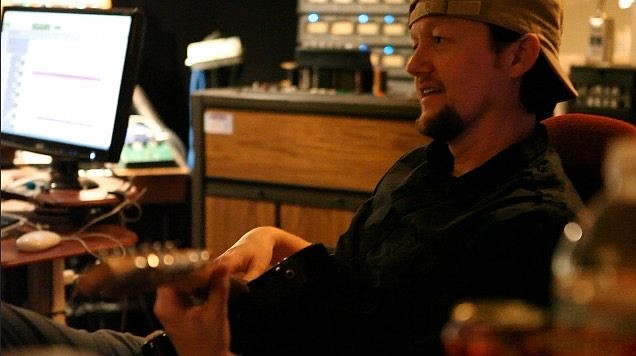 Greg Spradlin and other members of The Band of Imperials recorded parts of “Hi-Watter” in 2011 at Manny’s Estudio International in East L.A. (Special to the Democrat-Gazette/Jeremy Seifert)

The bulk of the recording was finished in 2011. Producer-engineer Tchad Blake, who has worked with Los Lobos, Arctic Monkeys, The Pretenders, Pearl Jam and others, mixed the album.

"I got hung up on the mix for a long time," Spradlin says. "There was something sonically I just didn't care for."

Other problems also got in the way of the release as Spradlin was dealing with "births and deaths and just trying to keep my head above water for a good long while," he says.

Eventually, he and Weinheimer revisited the record and tweaked the mix in Little Rock at Fellowship Hall Sound, Weinheimer's studio where Spradlin rents a practice space (he was on his way there during our phone interview last month).

"Over the years, we've amassed some cool gear that we didn't have at the start of the project," he says. "It made it come alive. For the first time I was like, I'm good. I'm happy with it now."

They shopped the record around, though there wasn't much label interest unless the band could tour, which wasn't feasible even before the novel coronavirus pandemic because of scheduling conflicts.

"Without Steve, this record is still sitting in the can," he says.

Spradlin produced Katy Hobgood Ray's 2019 album "I Dream of Water" that Howell released on his Out of the Past Music label. The process was so pleasant, Howell told Spradlin that he wanted to put out "Hi-Watter," which is available on vinyl, CD and streaming services (see gregspradlinoutfit.com for information on buying physical copies).

"I had heard it a few years ago," Howell says. "Jason played it for me and I was really smitten with it. Fantastic playing, of course, and world-class songs. It's all bonafide. It's not somebody shooting at something and not hitting it. Greg really nails it."

The pandemic has shut down any touring opportunities to promote the record, but Howell says his plans are "to float it out there and hope that somebody notices. That's about all you can do these days, but you can't win the lottery if you don't buy a ticket."

Spradlin says he hopes to eventually perform with some version of The Band of Imperials and to also collaborate with them again.

"This record has been stuck in the pipeline for so long now, and I've finally got it out. It's this huge weight lifted off, like your kid has finally graduated college. It's out on its own and now it has to find its own life."