Jill Biden drawing on classroom time for case against Trump 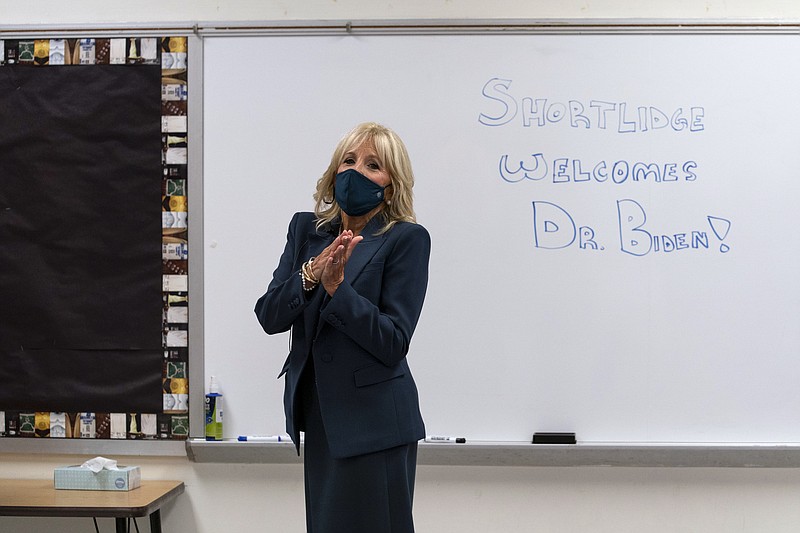 FILE - In this Sept. 1, 2020, file photo Jill Biden, wife of Democratic presidential candidate former Vice President Joe Biden, walks past a dry erase board in a classroom that reads "Shortlidge Welcomes Dr. Biden," as she tours the Evan G. Shortlidge Academy in Wilmington, Del. In an election year where reopening schools shuttered by the coronavirus pandemic is emerging as a flashpoint, Jill Biden is increasingly drawing on her experience in the classroom to empathize with parents struggling to cope with the shift to virtual learning. (AP Photo/Carolyn Kaster, File)

WAUWATOSA, Wis. — When Jill Biden introduced herself to millions of Americans during last month's Democratic National Convention, she did so from a high school where she once taught English near her Delaware home.

Since then, she's visited a classroom that would otherwise be filled with elementary school children, participated in a health briefing on how to safely resume in-person learning and met with teachers in a Wisconsin backyard.

The emphasis on education is a natural fit for someone who was a public school teacher for more than 20 years, earned two master's degrees and then a doctorate in education and continued teaching at a community college when her husband, Joe Biden, was vice president.

But in an election year where reopening schools shuttered by the coronavirus is emerging as a flashpoint, Jill Biden is increasingly drawing on her classroom experience to empathize with parents struggling to cope with the shift to virtual learning. She's taking a mostly virtual 10-city tour of schools disrupted by the pandemic and is trying to make the case that President Donald Trump doesn't deserve reeelection because of his handling of the coronavirus.

"I feel if Joe had been president at this time we would not be in the midst of this chaos," Jill Biden told a mother and two teachers during a discussion that lasted more than half an hour on the patio of a private home last week in Wauwatosa, outside Milwaukee.

Trump has also tried to seize on schools as an election-year issue, pressuring state and local leaders to resume classroom instruction and threatening to withhold federal dollars for those who don't. The Centers for Disease Control and Prevention has sent mixed signals, saying students should return to the classroom but also noting that virtual classes present the lowest risk of COVID-19 spread.

The public appears more skeptical of reopening than the White House.

Only about 1 in 10 Americans thinks day care centers, preschools or K-12 schools should open this fall without restrictions, according to a poll released in late July from The Associated Press-NORC Center for Public Affairs. Roughly 3 in 10 say that teaching kids in classrooms shouldn't happen at all.

If Biden wins the election, his wife has pledged that his administration will make listening to teachers' concerns a priority. She also could play a role in shaping school reopenings. Both Bidens listened and took notes during a virtual briefing last week with public health and education experts about how to approach a reopening without exacerbating the pandemic.

"How many times have we had someone who's wanted to be the education president and is very good on rhetoric but has very little or no idea how to translate that rhetoric into reality," said Randi Weingarten, president of the American Federation of Teachers, which has endorsed Biden. "She sends a message throughout America, not only of the importance of education, but also the importance of sweating the small stuff."

Sometimes her message is the contrast between Trump and a Biden administration. On the same day that the president traveled to Kenosha, Wisconsin, last week to blame protests that sometimes turned violent on "domestic terror," Jill Biden was touring Evan G. Shortlidge Academy, a kindergarten through second grade school in Wilmington, Delaware, where she and her husband live.

When Joe Biden made his own visit to Kenosha two days after Trump, both Bidens also made time for the Wauwatosa meeting a short time later. "Joe can talk about his education plan. I probably know it better than he does," Jill Biden said with a laugh.

As part of her multi-city tour, Jill Biden held a virtual North Carolina back-to-school roundtable and has upcoming online events in Florida and Nevada. She will also travel to Minnesota for an in-person meeting with parents and teachers.

At Shortlidge, the school year will begin Tuesday, but in the short term, all instruction will be online, which some parents worry is not as effective as traditional instruction. More than 330 of the school's 369 students are Black or Latino, and 77% receive federally subsidized lunches.

After walking through several empty classrooms and across freshly polished floors stenciled with paw prints in honor of the school's Wild Cats mascot, Jill Biden spoke to a small, socially distanced and masked group of teachers and administrators outside — near a playground closed during the pandemic and roped off with yellow caution tape.

The thrill of back-to-school has "turned from excitement into anxiety and the playgrounds are still. Some classrooms are dark as the bright young faces that used to fill them; now we just see them on screens," Jill Biden said, noting that parents and teachers are "losing sleep" over what's in store for youngsters this fall.

"Americans of all walks of life are putting their shoulders back, and they're fighting for each other. We haven't given up," she said. "We just need leadership worthy of our nation, and worthy of all of you."