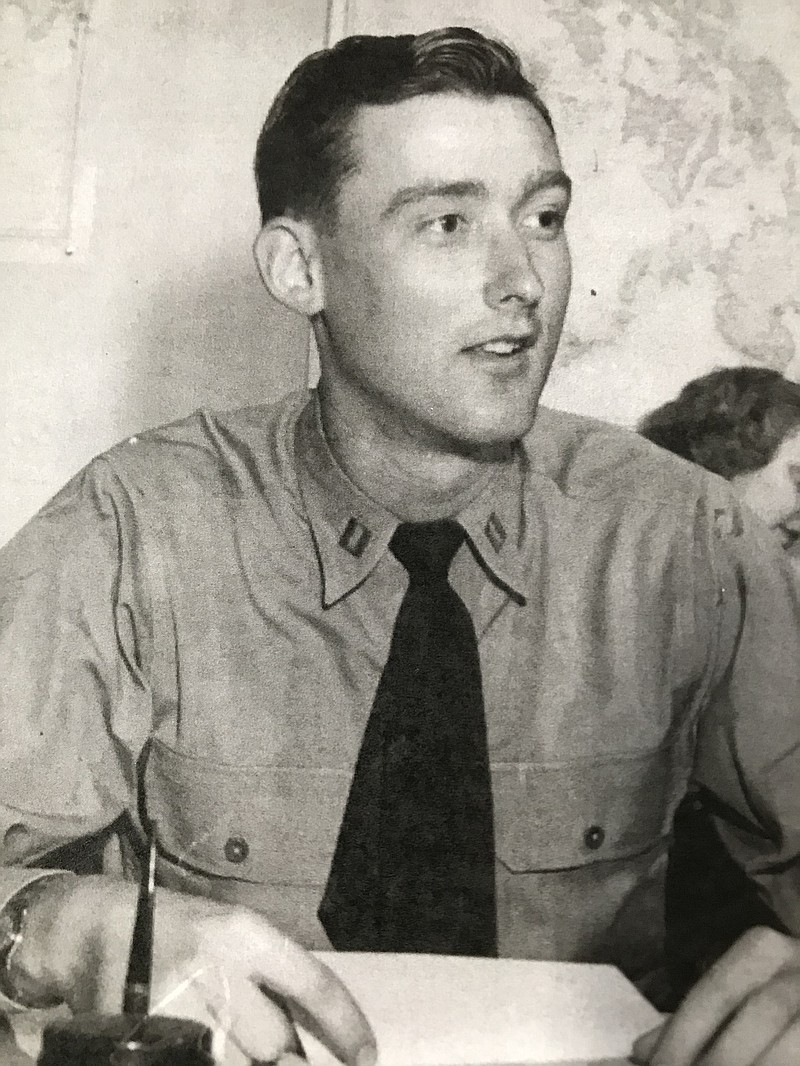 Navy Lt. John K. Bremyer carried the Matthew Perry flag from Washington, D.C., to the USS Missouri. MUST CREDIT: "Formal Surrender of the Japanese Empire on the Battleship Missouri, Featuring The Perry Flag."

The old wool flag was in a wooden box stowed in a courier's bag, and Lt. John K. Bremyer knew he had to keep it close by. He would take it with him when he went to the bathroom. When he went to eat. When he slept.

He would stay with it every minute of the 9,000-mile journey.

His mission was urgent. Bremyer, 25, was to carry the flag from Washington and travel on anything that could get him in a hurry to the legendary Fleet Adm. William F. "Bull" Halsey, then on the battleship USS Missouri, somewhere in the Pacific Ocean.

Exactly where, he didn't yet know.

Japan had just surrendered to the allies. But the formal surrender ceremony that would end World War II had not yet been held, and Halsey wanted this flag present for the solemn event, which would be held on the battleship in Tokyo Bay.

The flag was worn and begrimed with age, and almost a century old. It had a linen backing to support it. There were holes in the stripes, and the 31 stars were arranged unevenly.

But the flag had been to Japan before, when it was taken ashore and raised outside Yokohama in 1853 by Navy Commodore Matthew Perry.

He had been ordered to Japan by President Millard Fillmore to demand that the Japanese open their ports to trade. The mission was a success, and the flag became a treasured piece of history at the U.S. Naval Academy.

But Perry's exploit had been 92 years before. When told he was carrying the Perry flag, Bremyer replied: "What's that?"

It didn't matter. He had to get it across the country and the Pacific Ocean fast. Halsey was waiting for it.

The ceremony aboard the USS Missouri was to be one of the most dramatic moments of the war. The gigantic gray battleship would be in Tokyo Bay, where American and allied officers and Japanese officials would sign the surrender document.

It was scheduled for 9 a.m. Sunday, Sept. 2 -- three years and nine months since the Sunday morning of Dec. 7, 1941, when Japan attacked Pearl Harbor and the United States entered World War II.

Since then, more than 100,000 Americans -- and well over a million Japanese -- had been killed fighting in the Pacific.

It had been a titanic struggle, with ships and planes battling across thousands of miles of ocean, and soldiers and Marines fighting in malarial jungles on land.

Japan's cities had been devastated by American weapons, and Hiroshima and Nagasaki had been leveled by atomic bombs.

Japan had announced its capitulation on Aug. 15 -- Aug. 14 in the United States -- and now it would send a surrender delegation to the USS Missouri.

The ceremony was being carefully choreographed. American Army Gen. Douglas MacArthur would officiate. Halsey and Fleet Adm. Chester W. Nimitz would be present, and Nimitz would be one of the signers, along with officers from Great Britain and other allied nations.

It would be the closing scene in the global tragedy of World War II.

But if the flag was going to be there, Bremyer of McPherson, Kan., had to hurry.

He had an apartment in town with a buddy, and a steady girl named Jayne Dickey who he met at a dance in a women's hotel near Dupont Circle.

The war was essentially over. It had been a week since Japanese Emperor Hirohito announced Japan's surrender. Nazi Germany had given up in May.

On Thursday, Aug. 23, he went to work as usual. It was pleasantly cool for midsummer, and he and Jayne had a date that evening. The day was winding down when the orders came from Halsey.

The flag was rushed from the Naval Academy in Annapolis, Md., and Bremyer was instructed to "proceed immediately." But he had no clothes packed, and he had the date with Jayne.

On the other side of the world, the USS Missouri and other ships from Halsey's Third Fleet were approaching Japan's Sagami Bay, just outside Tokyo Bay. The Missouri had just learned that it would host the ceremony, and the crew was painting and scouring the vessel.

The Missouri still had a dent in its hull where a Japanese suicide plane had crashed into it in April, according to author Michael A. Lilly.

Meanwhile, Bremyer was on his way. He was exhausted and hungry. He had grabbed some pancakes and a sandwich in Winslow, Ariz., and another sandwich and a glass of tomato juice in San Francisco.

He reached Guam late at night, and he was not sure what to do next. "My instructions ... had been [to] effect delivery of the flag," he wrote. But where was he to find Halsey? Should he hand the flag off to someone else?

Then he got word: Halsey was on the battleship 1,500 miles away -- and waiting for the flag. There was a plane taking off the next morning for Iwo Jima, another battle-scarred island, which would get him halfway there.

He got some sleep, with the flag at his side. In the morning, he had a shave and put on some clean clothes and headed for Iwo Jima on a transport plane.

It was now Aug. 28. Things were unfolding, and Bremyer was worried about making it on time.

On Aug. 29, the seaplane took off and landed late in the afternoon on very rough water in Sagami Bay.

The USS Missouri sent a boat to get Bremyer, but in the big swells it crashed into the plane, damaging the aircraft's tail. He managed to board the pitching boat with the precious flag and was ferried to the battleship.

There, he handed the flag over to Halsey's aide, Lt. Cmdr. William J. Kitchell.

Fellow officers said they were amazed Bremyer had gotten there so fast.

That night, he had steak for dinner.

The next day, the USS Missouri steamed into Tokyo Bay and anchored where Perry had in 1853. The plan was to fly his flag from a mast, but when the bag was opened there was note inside from the museum saying it was too delicate, the Naval Academy said.

So it was put in a framed glass case and placed on a ship's bulkhead, where everyone could see it.

Three days later, allied generals and admirals and a small delegation of Japanese officials assembled on the battleship under gray skies to sign the "instrument of surrender."

Hundreds of reporters and photographers were present. Sailors crammed every vantage point on board. Bremyer was among them.

Once everyone took their assigned places, MacArthur, his hands shaking, strode to a microphone: "We are gathered here, representatives of the major warring powers, to conclude a solemn agreement whereby peace may be restored," he said.

The news went out across the world. World War II was officially over.

Back in Washington, Jayne Dickey heard it on the radio and suddenly realized why Bremyer had missed their date.

They were married that December.

Information for this article was contributed by Magda Jean-Louis of The Washington Post. 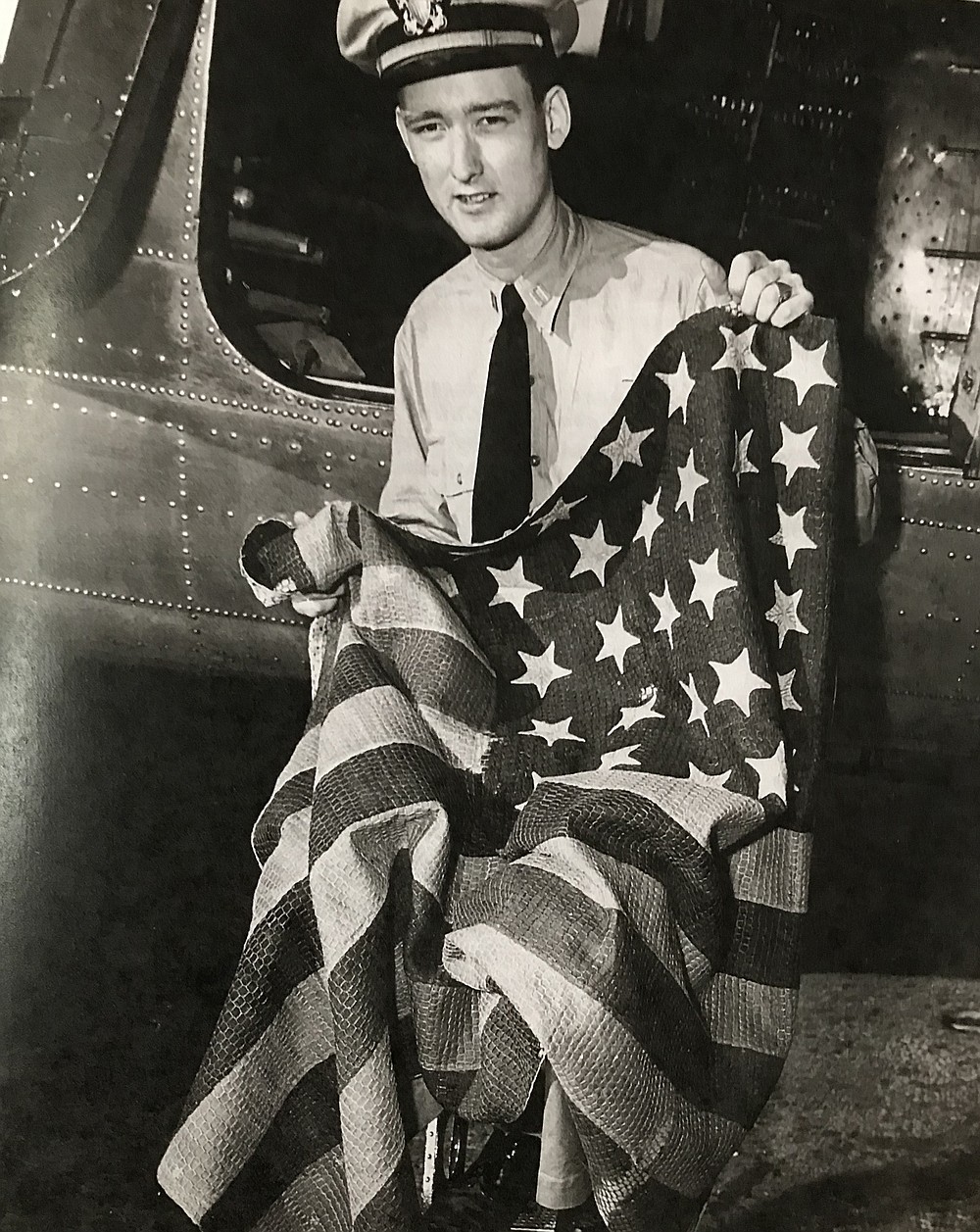 Lt. John K. Bremyer and the Perry flag. MUST CREDIT: "Formal Surrender of the Japanese Empire on the Battleship Missouri, Featuring The Perry Flag."
ADVERTISEMENT