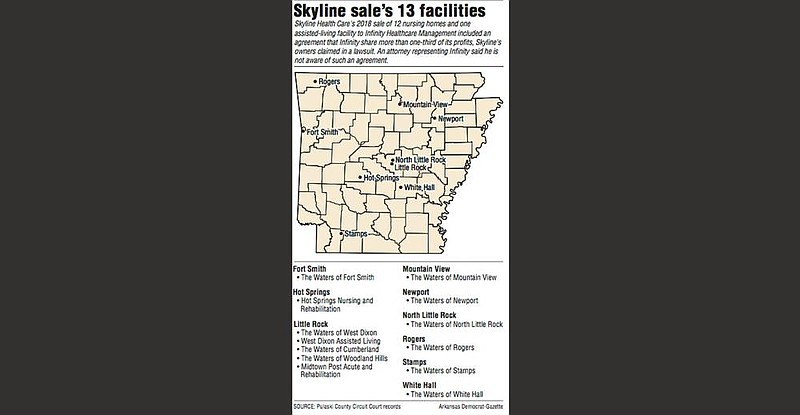 LITTLE ROCK -- The married couple behind the failed nursing home chain Skyline Health Care struck a profit-sharing deal with one of the firms that took over their Arkansas properties, they said in court filings.

The allegation suggests Joseph and Rosie Schwartz of Skyline maintained financial ties to nursing homes they sold to Infinity Healthcare Management amid a state criminal investigation.

It's one of dozens of claims the pair made last week in a broader Pulaski County lawsuit accusing Infinity of not fulfilling its responsibilities as the buyer, such as personally guaranteeing a preexisting bank loan. An attorney representing Infinity said the claims are "signs of ... desperation."

Arkansas officials had said they took steps to ensure Skyline, which has drawn criticism nationwide since its 2018 failure, was not involved with Infinity's business. Skyline held the license for one in every 10 Arkansas nursing home beds before the company collapsed, with its owners saying they were out of money.

An Arkansas Department of Human Services spokeswoman previously told the Arkansas Democrat-Gazette that officials signed off on the 2018 sale of Skyline nursing homes to Infinity only after the Schwartz family agreed to "divest" all financial interest in other Infinity properties, which included a pair of Illinois nursing homes.

At the time, the Arkansas attorney general's office had discouraged the state from approving the license transfers amid suspicion that Skyline had committed fraud and was connected to Infinity, the Democrat-Gazette reported in April 2019, citing emails obtained through the Arkansas Freedom of Information Act.

Yet, the profit-sharing agreement as described in the lawsuit would have provided the Schwartz family with more than a third of profits at 12 Arkansas nursing homes and one assisted-living facility that they sold to Infinity.

In an interview, their attorney stood by the claim that such an agreement exists but said he disagreed that it would be tantamount to the Schwartzes holding a financial interest in the homes.

John Wolf, an attorney representing Infinity's owners, said he doesn't believe the agreement exists, but he noted that he hasn't "gotten to that depth of investigating the case yet."

"My off-the-cuff answer would be, 'No, it doesn't exist,'" said Wolf of Skokie, Ill. "I don't believe there was any trailing financial investment by the Schwartzes on these" nursing homes.

A spokeswoman for the Arkansas attorney general's office last week said a criminal investigation into Skyline's Arkansas operations is ongoing. Company officials have not been charged with crimes.

Skyline's failure here and in other states affected more than 100 nursing homes. The New Jersey-based company rapidly rose from obscurity to acquire 22 Arkansas nursing homes, as well as dozens more in Kansas, Nebraska, Pennsylvania and South Dakota before financial woes exploded into view.

Skyline lost credit lines at some of its nursing homes and was on the verge of missing payroll when industry regulators across the country began to intervene. The company by early 2019 gave up all of its licenses to operate Arkansas nursing homes.

Some states, such as Kansas, imposed greater requirements on incoming nursing home owners after the company's tumble. Arkansas officials have said they plan to roll out tighter financial standards and oversight on nursing home owners in the 2021 lawmaking session.

Skyline additionally transferred licenses for seven Arkansas nursing homes to a start-up nonprofit called Community Compassion Centers of Arkansas, two to a trust managed by Christopher Brogdon of Atlanta and one to a Conway company. These transfers are not at issue in the lawsuit.

The family filed a similar lawsuit in February in federal court in Illinois, where attorneys are debating whether it is the right setting.

Asked why the profit-sharing agreement wasn't attached to the lawsuits -- other agreements between Skyline and Infinity were disclosed -- Fedor said he hopes to obtain a copy through discovery, or the sharing of documents relevant to a lawsuit's claims.

"I believe Mr. and Mrs. Schwartz verified [their lawsuit claims] under penalties of perjury," Fedor said.

Companies linked to Infinity and its related real estate investment trust, called Strawberry Fields, hold the property deeds and operator licenses for the nursing homes. This means any amounts due to the Schwartzes, as described by the lawsuit, would be divvied up after Infinity and related businesses take a cut of the income.

The Schwartzes, who listed a Brooklyn, N.Y. address in the lawsuit, have not received any money under the profit-sharing agreement, Fedor said, and he does not know whether the nursing homes have made any profit.

Skyline's dealings with Infinity were heavily scrutinized, with state and federal investigators advising the Arkansas Department of Human Services to act with caution, the Democrat-Gazette previously reported.

In September 2018, a federal agent in the Office of Inspector General for U.S. Health and Human Services wrote an email advising Arkansas Department of Human Services officials to coordinate oversight of the licensing transfer with the Centers for Medicare and Medicaid Services.

"My concern is that this is a pattern of conduct by Skyline to change names of companies but have the same people running it behind the scenes," the federal agent wrote, noting that Infinity "has a lot of the same management" as Skyline.

Similarly, the top Medicaid fraud investigator in Rutledge's office told the Human Services Department that the office opposed the transfer.

Human Services Department spokeswoman Amy Webb said last year that state law limits the reasons for denying licensing transfers. Rutledge's office "did express concern, but they did not give us grounds for denial," she said in the 2019 interview.

Before the licensing transfers, Human Services officials learned that Schwartz family members held interest in Infinity and asked them to divest, which they did, Webb said at the time.

Last week Webb said the agency would not comment on "ongoing litigation" when asked whether the state was aware of a profit-sharing agreement or whether one would be permitted.

Aside from the profit-sharing agreement, the Schwartzes claim Infinity's owners, Moishe Gubin of Indiana and Michael Blisko of Illinois, did not assume responsibility for Skyline's existing loan debt as promised or pay the Schwartzes their share of money Infinity collected while managing the nursing homes before the sales were finalized.

They ask for property-sale agreements to be rescinded, which would restore the Schwartzes' ownership of the nursing home buildings and the land on which they sit.

The Schwartzes in lawsuits have blamed the company's failing on others. In a lawsuit filed in federal court in California, the couple said they were misled into thinking the nursing homes they were acquiring generated more money than they actually did.

"My client has lost everything," Fedor said. "Since 2018 when their business imploded because of -- primarily -- others taking advantage of them and misrepresenting financials and causing implosions of their business across the country, they've lost everything. What we're trying to do is re-balance those scales, so to speak."

Wolf, the attorney representing Infinity, characterized the couple's claims against Infinity as a "cut-throat tactic to squeeze out some money."

Infinity paid Skyline's old debts with Arkansas vendors, and it paid state government money that auditors "clawed back" after finding that Medicaid overpaid the nursing homes, he said. The state last year said it had recouped $4.7 million overpaid to Skyline properties.

Wolf said the Schwartzes' petition to have the property-sale agreements rescinded is an "incredibly extreme" request that is highly unlikely to succeed on legal grounds.

"I'm sure the state of Arkansas would have something to say about that, too," Wolf said.