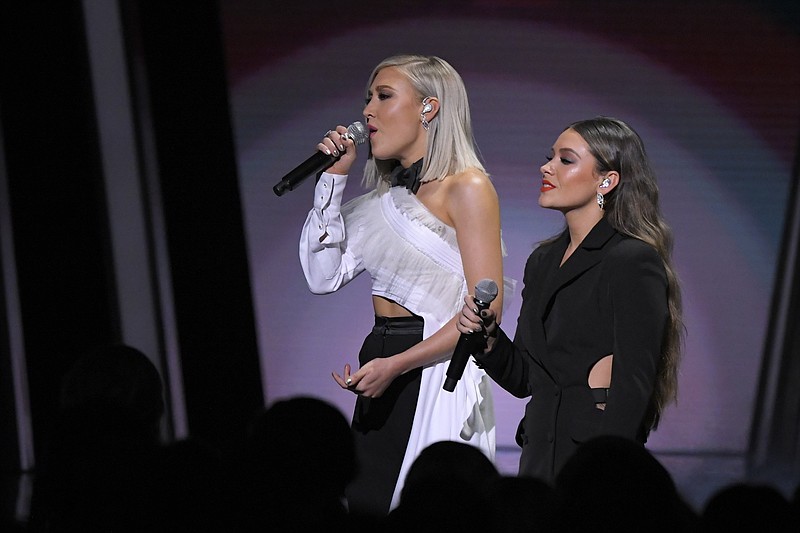 Madison Marlow (left) and Tae Dye of Maddie & Tae hit No. 1 recently with their ballad “Die From a Broken Heart.” It was on the Billboard charts for a year before hitting the top spot. (AP/Mark J. Terrill) ( Mark J. Terrill )

When country star Maren Morris was debating whether to release the melancholy track “I Could Use a Love Song” as a single about four years ago, a country radio programmer offered her some advice: “For the love of God, don’t make that a single — it’s a ballad,” he said, according to Morris. “No one wants to hear a bunch of sad women on the radio.”

She didn’t listen to the programmer. And “I Could Use a Love Song” became her first No. 1 hit on country radio.

Ballads are a staple of country music, which prides itself on capturing deep personal emotion and storytelling. Such songs, and especially those sung by women, helped define the genre: Patsy Cline’s “Crazy,” Deana Carter’s “Strawberry Wine,” Lee Ann Womack’s “I Hope You Dance” and countless others. But radio programmers frequently seek out up-tempo songs they think will keep their audience entertained.

While ballads can be a tough sell for any act, it’s particularly difficult for women, who only make up about 10% of country radio airplay. In mainstream country, radio is the primary driving force to build a career. Studies show when female artists do get on the air, their songs typically face a longer climb up the charts. Plus, some programmers abide by the dubious unwritten rule that they can’t play two women back to back.

Katie Dean, senior vice president for promotion at MCA Nashville, said a radio program director recently begged her, “Please don’t bring me a female with a ballad.” Female singers say they have repeatedly been told the same thing: Releasing a ballad as a single is a bad idea. They’re too slow. They’re too sad. Audiences won’t be interested.

However, multiple powerful ballads in the past several years have shown there is quite an appetite, with radio hits from Kelsea Ballerini’s “Peter Pan” to Carrie Underwood’s “Cry Pretty” to Maddie & Tae’s “Die From a Broken Heart.” In addition, slow songs that stall on the radio get millions of plays on streaming services, such as Kacey Musgraves’s “Rainbow,” Ashley McBryde’s “A Little Dive Bar in Dahlonega” and Runaway June’s “Wild West.”

The myth that audiences don’t like ballads by women is one of those “folklore tales” passed down through the years, said Kris Daniels, director of music programming for Radio Disney and Radio Disney Country. In her experience, it’s rooted in the idea that it’s harder to develop women as breakout stars, given that they receive so little radio airplay in the first place.

Yet when a ballad from a new female artist does connect, “the songs are huge. Sometimes they’re career records,” Daniels says.

Maddie & Tae’s “Die From a Broken Heart” was never supposed to be a radio single.

Maddie Marlow and Tae Dye, along with Jonathan Singleton and Deric Ruttan, wrote the devastating ballad shortly after Dye ended a three-year relationship. When the track debuted online in fall 2018, satellite radio SiriusXM’s The Highway started spinning it, and streaming and sales figures spiked. Executives at their label, Mercury Nashville, noticed the strong reaction and started talking about releasing it to radio.

Still, Marlow and Dye were “gun shy,” as they put it. Not only were they rebuilding their career after their first label folded, but the usual warnings about slower songs were ingrained in their minds. Dye recalled when they were brand new artists, executives cautioned that their second single, the inspirational ballad “Fly,” would have a more difficult journey than their upbeat debut smash, “Girl in a Country Song.”

But as “Die From a Broken Heart” continued to do “monster” numbers on streaming services, Marlow said, their label insisted that they needed to take a chance. They officially sent it to radio in May.

Although the track was perilously close to falling off the chart at times, the label’s radio promotion team kept fighting, and the song hung on for 54 weeks. When it reached No. 1 in August, it broke a record for the longest trek to the top for a female act in the Billboard chart’s history.

“This song beat all odds. It’s female. It’s a ballad. It’s peaking in the summertime … it’s just insane,” Marlow said. “We just feel blessed and so grateful that we get to sing this song for the rest of our careers.”

While the country radio numbers don’t show a great picture for female artists in general, when women do get airplay, a notable number of ballads become hits. Since 2015, 322 songs have peaked in the Top 10 on the Mediabase country radio charts, according to Jada Watson, a musicologist and University of Ottawa professor. Within that list, only 34 of those songs were by women, and 10 were ballads — six of which went to No. 1. Watson says that about one-third of Top 10 songs being ballads is a remarkable ratio, given that women are told that slow songs don’t sell.

It’s clear that people in the country industry, including those in radio, are big fans of slower songs in general: In the last 20 years, the Country Music Association Award for song of the year has gone almost exclusively to ballads.

But radio is a business, and a programmer’s priority is to keep listeners from switching to another station. Although multiple radio staff members say they have never seen data proving people change the station when the tempo slows down, sometimes ballads don’t test well when they do call-out research. Or, their instinct tells them that if too many songs are too depressing, listeners will want to tune out.

MCA Nashville’s Dean said that when she pitches songs, regardless of the artist, programmers often quickly ask, “Is it a ballad? Is it tempo?” She experienced the challenge of getting a ballad up the charts when she helped work Sugarland’s piano-driven vocal “Stay” to radio in 2007, which was seen as a risk until it became a No. 1 smash.

Radio programmers say they hear similar things from record labels. Johnny Chiang, director of operations for Cox Media Group in Houston, said that sometimes when a label’s promotion team reaches out to him, the first words out of their mouths are “It’s tempo!” even if he didn’t ask.

He has a theory about the “tempo” fixation: Over the years, commercial country radio has been increasingly consolidated among major companies. When that happens, some companies cut back on program directors and hand over country programming duties to the people who also run Top 40 stations. And Top 40 is driven by heavily produced sounds and trends, so that preference has crossed over to country music. This is possibly why radio was drawn to pop and rock-infused acts like Florida Georgia Line and Luke Bryan earlier this decade, Chiang theorized, and the Nashville machine followed suit.

Like Morris with “I Could Use a Love Song,” multiple female artists recently have seen ballads become their first No. 1 hits. Ingrid Andress experienced this several months ago when her debut single, the piano-driven “More Hearts Than Mine,” hit the top of the charts. She was initially nervous to release the song, centered on the anxiety of bringing a new boyfriend home to meet your family.

“Everybody tells you, ‘You need an up-tempo, happy song.’ And I was like, ‘Well, this is the opposite of everything that you want, but here you go, cause I think it’s dope,’” Andress said in an interview in February at Country Radio Seminar in Nashville. “But the whole reason I write songs is to relate to people, and the stories people have told me about how they relate to it have made it all worthwhile. Country radio has helped spread that story.”

“Great songs will always find a way,” said Marci Braun, music director and assistant program director for WUSN in Chicago. She pointed to Tim McGraw’s “Humble and Kind” and Miranda Lambert’s “The House That Built Me,” saying, “I couldn’t picture our format without those songs.”

J.R. Schumann, the head of country music programming for SiriusXM, counsels artists to ignore naysayers. The first time he heard Carly Pearce’s haunting “Every Little Thing,” he said, “there were a lot of people surrounding her telling her not to do it, a female can’t put out a ballad, blah blah blah.”

After it started playing on SiriusXM, sales took off and Pearce was signed to a record deal. The song eventually went No. 1. “Now I joke with her, ‘I hope you kept all of those texts and emails from everybody telling you that ‘Every Little Thing’ was going to ruin your career,’” Schumann said.

He was shocked when he found out that there was initially no plan to release “Die From a Broken Heart” as a single.

“‘Die From a Broken Heart’ is an important song,” Schumann said. “And the fact that there was a chance that that song would have not been a single is scary — that this broken system and process of everything would have potentially prevented that song from being exposed.”