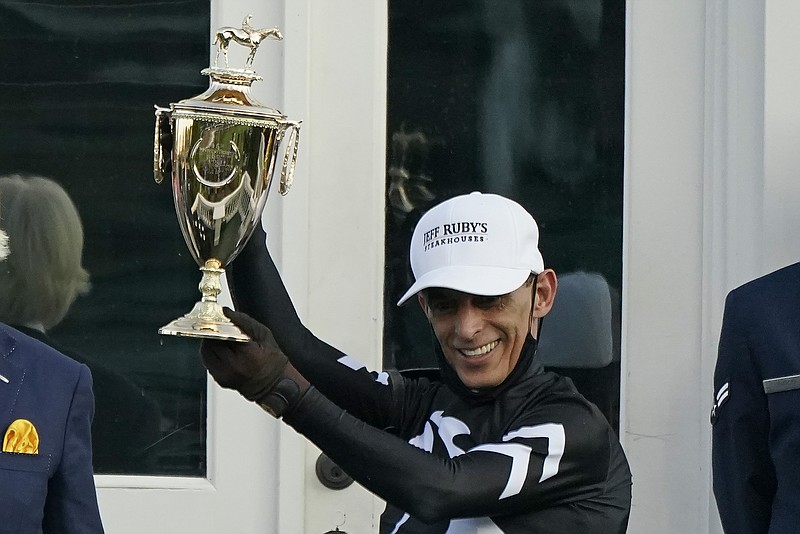 John Velazquez holds the trophy after riding Authentic to victory in the 146th running of the Kentucky Derby at Churchill Downs, Saturday, Sept. 5, 2020, in Louisville, Ky. (AP Photo/Jeff Roberson)

LOUISVILLE, Ky. -- For John Velazquez, his third Kentucky Derby win was as charming as the first.

It was certainly stunning for the Hall of Fame jockey who guided Authentic to a wire-to-wire victory on Saturday at Churchill Downs. With all the attention focused on 3-5 favorite Tiz the Law, Authentic quickly set the pace and made others chase him, to no avail.

Tiz the Law gave it a shot down the stretch, but Authentic won by 1 1/4 lengths. Not bad considering it was Velazquez's first race on the colt after Mike Smith rode him to victory in the Haskell. Smith rode 5-1 second choice Honor A. P., who finished fourth.

"I've been fortunate to have these great jockeys win these races," Hall of Fame trainer Bob Baffert said. "But that was won by Johnny. That race will go down as one of the top, just the way he handled a horse like him."

Authentic was the 8-1 third choice from the No. 18 post, but that didn't matter as he and Velazquez were in sync from the start. The horse broke fast from the gate and never let up, clocking 2:00.61 over 1 1/4 miles and giving Baffert his record-tying sixth Derby win.

To hear Velazquez tell it, he was just along for the ride.

"I give credit to the horse, really," said Velazquez, whose previous Derby wins came aboard Always Dreaming in 2017 and Animal Kingdom in 2011.

"If you don't have the horse underneath you, you can't win. We planned really well. I told Bob even that when we get to the lead, I'm not going into the rail. I wanted to see everybody outside of me.

"I was hoping that my horse responded to what I wanted him to do and Bob said to make sure you go left-handed [with the whip]. It's a great feeling to have when you ask the horse for more and he gives you everything he can."

While things fell perfectly into place for the horse, trainer and jockey, there were plenty of folks involved with Authentic.

Among the syndicates owning big shares of Authentic is Spendthrift Farm, whose owner, B. Wayne Hughes, founded Public Storage. A partnership with MyRaceHorse also provided a piece of the action to more than 4,600 public shareholders who paid as little as $206 each for the horse.

Authentic made a lot of folks happy.

"Wayne really took to the idea of being able to bring horse ownership to literally every man and woman, any economic stratus," Spendthrift President Eric Gustavson said. "He's a real advocate for racing. He literally put his money where he mouth is and invested with MyRaceHorse and he's just a champion for it."

As for Velazquez, he needed a minute to catch his breath and collect his thoughts. While he downplayed ranking the marquee wins in his career, there's no doubt this one had special meaning because he initially didn't see it coming.

Things became a lot clearer when Authentic jumped out front to stay.

"The emotions get there," Velazquez said. "Proud of the horse, proud of the race, everything comes out good. The feeling you get with it doesn't get old." 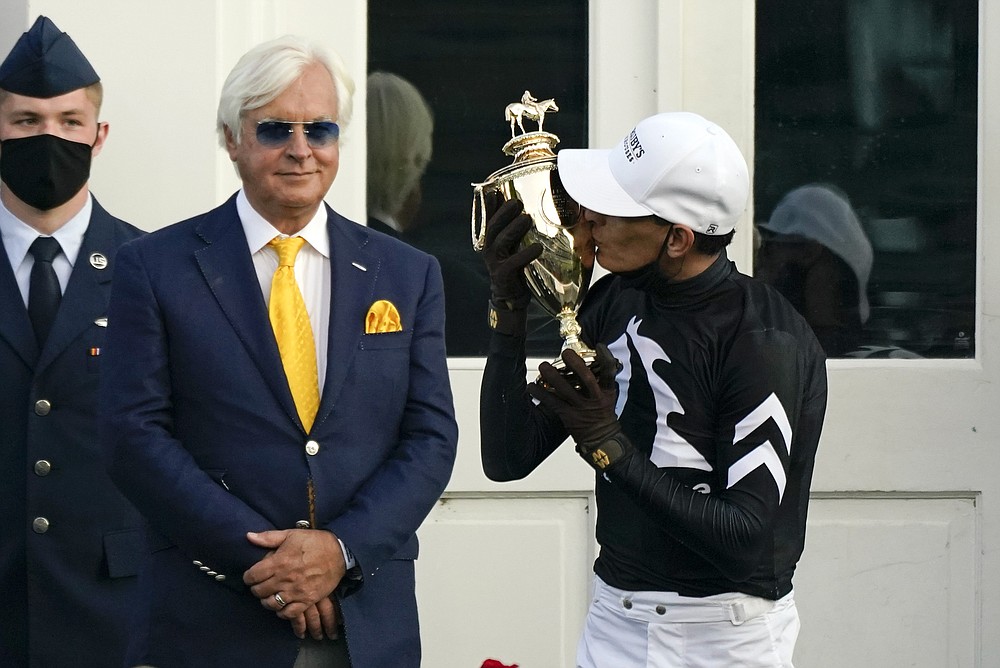 John Velazquez kisses the trophy after riding Authentic to victory in the 146th running of the Kentucky Derby at Churchill Downs, Saturday, Sept. 5, 2020, in Louisville, Ky. (AP Photo/Jeff Roberson) 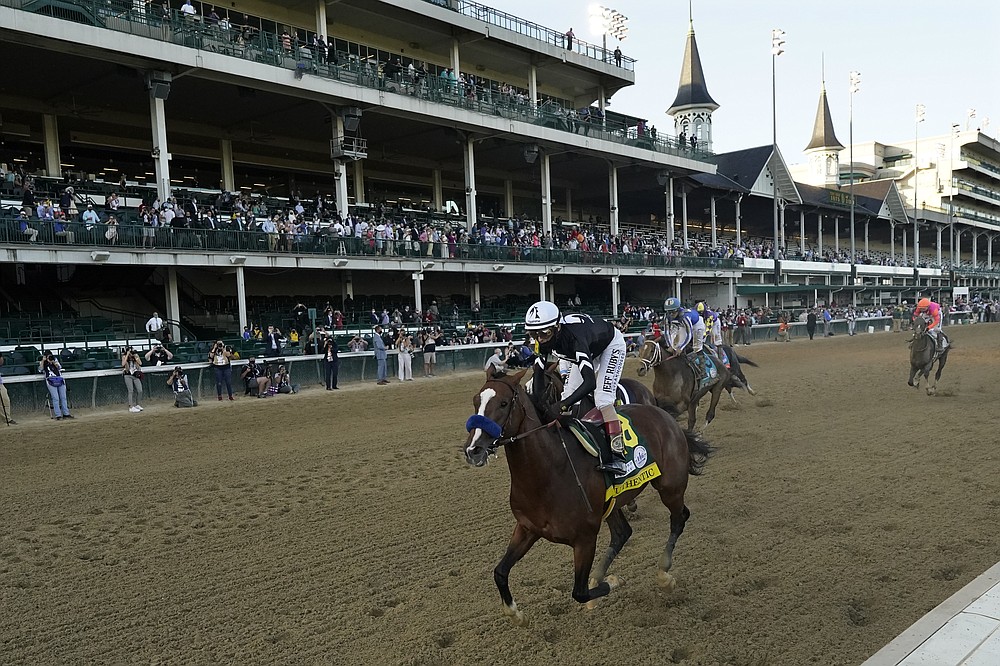 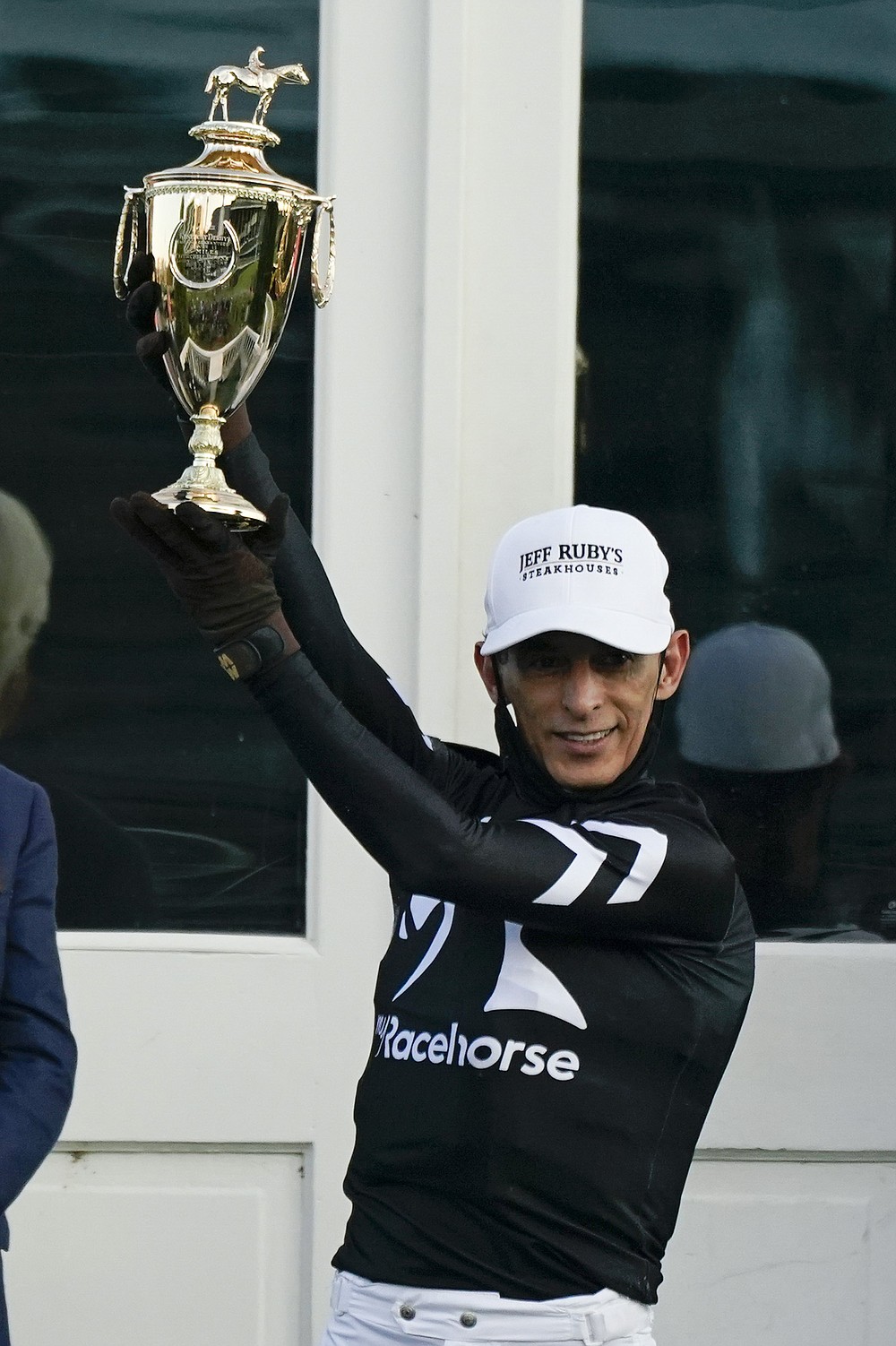 John Velazquez holds the trophy after riding Authentic to victory in the 146th running of the Kentucky Derby at Churchill Downs, Saturday, Sept. 5, 2020, in Louisville, Ky. (AP Photo/Jeff Roberson)
ADVERTISEMENT