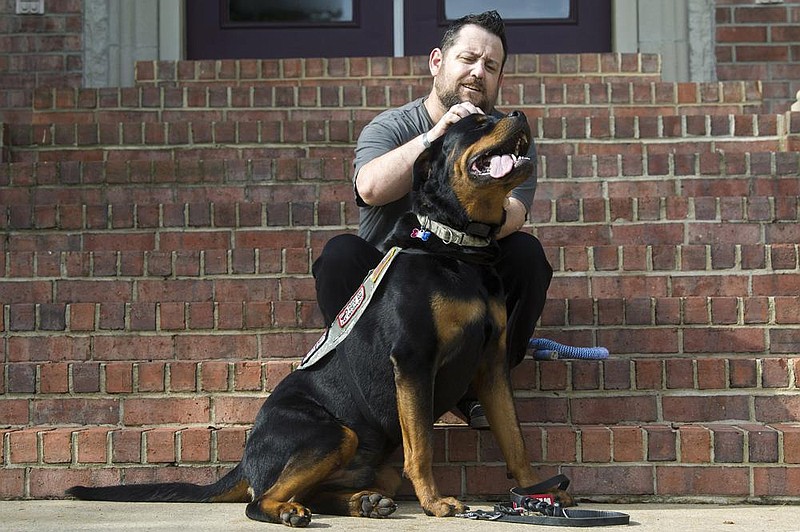 Later this month, a federal jury will be asked to decide if a Benton man is entitled to take his dog to work with him.

Perry Hopman, 45, isn't just a dog lover who would like his pet's companionship. He's an Army veteran and a former flight medic who, after an 18-month deployment to Iraq, was diagnosed in 2008 with post-traumatic stress disorder. He's also a survivor of a subsequent traumatic brain injury that occurred during a 2010 deployment to Kosovo with the National Guard, worsening his PTSD.

And the dog, a Rottweiler named Atlas, isn't just a house pet. He's a trained service dog who can sense Hopman's anxiety levels and "ground" him by sitting on his feet, as a weighted blanket can calm an autistic child. He can remind Hopman to take his medicine, keep crowds away, block anyone approaching from behind, notify his master when a migraine is coming, find the closest exit in a building, pick up and retrieve items, wake Hopman from nightmares and even force him out of the house when he is being too reclusive.

Hopman says he was up-front about his PTSD diagnosis when he started working at Union Pacific's North Little Rock station in May 2008, though he didn't need or ask for any special accommodations.

Even after a five-year absence from his conductor job that began with his deployment to Kosovo, where he suffered the brain injury, Hopman didn't initially request any special accommodations upon his return. That was in May of 2015, when he also medically retired from the Army National Guard.

But nearly a year later, his worsening struggles with PTSD prompted him to seek permission to bring Atlas, whom he had adopted a year earlier as a pup, to work with him as a service dog.

Although Hopman was able to safely perform all functions of his job without Atlas at his side, he argued that the dog would help him be more comfortable physically and mentally. His request was presented as a "reasonable accommodation" for his disability, "so that he may have equal benefits and privileges of employment as are enjoyed by his co-workers without disabilities."

Hopman worked aboard trains traveling from Little Rock to Monroe, La., and back, sometimes requiring him to be away overnight. He is now an engineer who travels overnight to and from Van Buren in Crawford County.

He told his bosses that his medical team had recommended he get a service dog to mitigate his flashbacks, anxiety and migraine headaches.

But Union Pacific denied the request, saying it was unclear how a dog would react to dangerous conditions at the rail-yard such as moving cars and locomotives; that there was no infrastructure to support a dog on a train or on overnight trips that Hopman's conductor job sometimes required; and that the dog could pose a risk to other employees.

But the railroad still refused the request. Hopman said Friday that "it's hard to say why, because we can't really get a straight answer."

So on Jan. 26, 2018, Hopman filed a federal lawsuit alleging that by refusing his request for a disability accommodation, the railroad was subjecting him to disability discrimination, in violation of Section 504 of the Rehabilitation Act of 1973 and the Americans with Disabilities Act.

In late May, U.S. District Judge Kristine Baker denied Union Pacific's request for summary judgment, saying disputed facts about the railroad's assertions that Hopman's request wasn't necessary or reasonable must be decided by a jury. The trial is scheduled to begin Sept. 28 in her Little Rock courtroom.

Hopman calls Atlas "an absolute loverboy who is the biggest, most happiest dog you will ever find, who loves everybody and everything," and says no other employees, to his knowledge, have complained about the 125-pound dog or spoken about being afraid of him. He said that when Atlas isn't with him, he is home with Hopman's wife and children, but they don't interact with him like Hopman does.

Hopman said that when he is home, Atlas will hang out with the entire family, including its two cats, but otherwise he stays mostly in a room by himself to minimize interaction with other people, which is part of his service-dog protocol.

Hopman concedes that he can perform the essential functions of his job whether Atlas is with him or not. But he says that by accommodating his request, the railroad would allow him to enjoy the right to work without the burden and pain of PTSD.

In a pre-trial ruling, Baker rejected the railroad's contention that Hopman may only bring a "reasonable accommodation" claim if he is unable to perform the essential functions of his job without the accommodation.

Baker found that Hopman's claim fits under the third definition.

She wrote in a May 26 order denying Union Pacific's summary judgment motion that "many courts have recognized, in accordance with the ADA and its implementing regulations, that an employee ably performing the essential functions of his job might still need a reasonable accommodation to enjoy equal benefits and privileges of employment."

She cited a 2018 ruling in the District of Columbia Circuit which says "a reasonable jury could conclude that forcing [the plaintiff] to work with pain when that pain could be alleviated by his requested accommodation violates the ADA."

"Mr. Hopman contends that, due to his disabilities, he needed Atlas with him to work -- as other employees do -- without suffering from the flashbacks, migraines, anxiety and depression that have accompanied his PTSD," Baker said.

Union Pacific argued in written briefs that employers are only obligated to provide accommodations that are reasonable, even if they aren't necessarily the particular accommodation sought. But Baker said Hopman needs only to show that his request seems "reasonable on its face."

The law states that an accommodation isn't reasonable if an employer can show that it would impose an undue hardship on the employer. Baker said Union Pacific hasn't demonstrated any undue hardship it would suffer as a result of granting Hopman's request.

She noted that based on evidence she had seen so far, a reasonable juror could conclude that Hopman's request wouldn't cost the railroad any money and doesn't violate any rule. She said a reasonable juror could also find that no problems resulted when another employee brought his dog to work years earlier to mitigate an anxiety disorder. And she noted that Union Pacific even has its own dogs to assist personnel on and around trains, and thoroughly assesses those dogs and handlers before approving them, which indicates it could easily do the same for Hopman and Atlas.

John W. Griffin Jr., a Victoria, Texas, attorney who is representing Hopman, said the case is the first in the country involving the refusal of Union Pacific, the country's largest railroad, to allow conductors and engineers to use a service dog to combat symptoms of PTSD.

He said he hopes that Hopman's case "will open up a lot of doors for other workers."

Griffin is seeking a court order requiring the company to allow Atlas on the job, as well as damages to compensate Hopman for different jobs he did to avoid being away from home overnight without Atlas, even though the railroad said he didn't receive lower pay; and attorneys' fees.

The railroad argued that to be able to sue, Hopman had to show that he suffered "adverse employment action," such as a demotion or a loss of pay, as a result of his request. But Baker said, "there is no requirement to demonstrate any adverse action other than the failure to accommodate itself."