GAME ON: 'Fall Guys' is a wacky, silly game with loads of fun 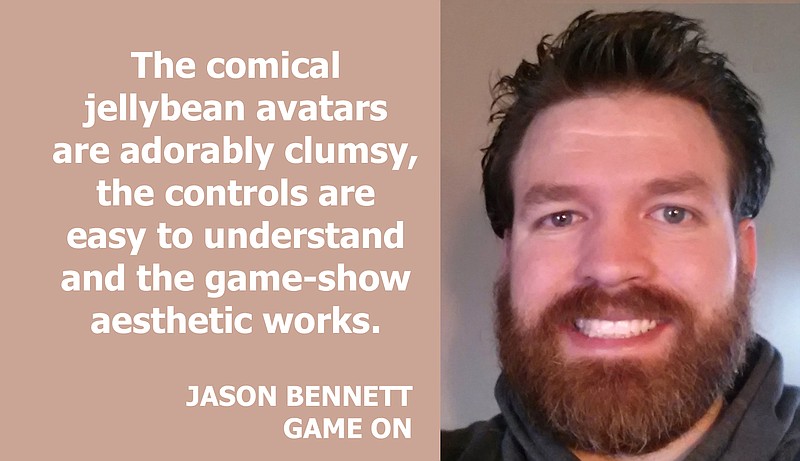 Games such as "Fortnite" and "PUBG" might have popularized the ever-expanding battle royale genre, but it has been perfected by the beautifully silly "Fall Guys: The Ultimate Knockout."

"Fall Guys" isn't just a game, it's a game show, inspired by wacky, last-man-standing obstacle course TV shows such as "Wipeout" and "Most Extreme Challenge."

Each match features up to 60 players, who direct their jellybean-like avatars through a series of increasingly chaotic minigames.

Despite being an obstacle-course platformer, this is no "Ninja Warrior" with world-class athletes deftly overcoming challenges with the strength of gymnasts or grace of ballerinas.

Instead, players control a fat jellybean with stubby arms and legs, dressed in a ridiculous mascot-like costume, charging forward alongside 59 other jellybeans, rumbling and bumbling and stumbling forward like a cascade of squeaky toys, vying to cross the finish line and make it to the next round.

It's equal parts skill and hilarity as dozens of costumed jellybeans carom off obstacles and one another with ragdoll collisions.

And it's also an extremely accessible game. It's appropriate for all ages, as failures end only in players' avatars falling off the obstacle course into a pit of pink slime.

There's no story or dialogue of any kind. There's no text or voice chat, so anyone, of any age or language, can seamlessly play together.

The art style of "Fall Guys" is vibrant, beautiful and cheerful. Gameplay is super simple, and is limited to running, jumping, grabbing and diving.

The fall guys themselves can be almost infinitely customized. Playing the game earns players "kudos," which can then be spent on outfits, colors, patterns, emotes, faces, celebrations and more. The rarest outfits cost "crowns," which can be won by being the last bean standing and winning the game.

There are also downloadable-content packs that can be bought with real currency that unlock sets of outfits, such as a fast-food theme set of outfits, in case dressing an avatar up like a box of fries, a cheeseburger or a slurpee is your thing.

Other costumes available include a pirate, monkey, unicorn, astronaut, various birds such as toucans, parrots and owls, ninjas, dinosaurs, hot dogs and more.

The game is in Season 1, but a sneak preview of Season 2 has revealed the next theme is medieval, and costumes such as knights, wizards, witches, vikings and more will be available.

There are four main types of minigame to challenge: racing, survival, team and finale.

The most basic rounds are just races through an obstacle course, where only a certain fraction of competitors can progress to the next round.

Examples include Dizzy Heights, featuring lots of spinny platforms, and Fruit Chute, where players navigate up a conveyor belt while dodging giant apples and oranges launched from cannons. (Why it's not called Fruit Shoot is beyond me.)

Survival games include Roll Out, in which all the players try to stay on top of a giant cylinder with many rotating parts designed to knock them off.

It's not all fun and games, though. There is a limited ability to grab other players, which can hold them in position briefly and can be used to mess up a competitor's timing on a jump or prevent them from getting out of the way of a bar sweeping them off the stage.

Team-based games include various team-tag options such as Fall Ball, a game with giant soccer balls that players try to knock into the opponent's goal, or Hoopsie Daisy, where teams compete to see which side can earn more points by jumping through rings.

And then there are the finales. There can be only one winner, so the finale is designed for a small number of players until only the victor remains.

What makes "Fall Guys" the most fun is playing with friends.

While there is no local, couch or split-screen cooperative play, players can form a party of up to four (such as through PlayStation Network), and will be placed on the same team. Being able to team up and help one another succeed in challenges (and thwart opponents) is a huge benefit.

"Fall Guys" is currently available on PC and PlayStation 4, although an Xbox and Nintendo Switch version will likely come out sometime next year.

The comical jellybean avatars are adorably clumsy, the controls are easy to understand and the game-show aesthetic works well. With all the chaos and ragdoll physics, many games will end quite unpredictably. Its pick-up-and-play nature is also a benefit, with each game taking only about 15 minutes to complete.

Currently, there are about two dozen minigames in rotation, and it appears that each season will feature a new mixture of these stages to compete on, with new hazards ready to send your jellybean flying off the course.

"Fall Guys" is a guaranteed fun time at an excellent price point, and it's just as fun to watch as it is to play.