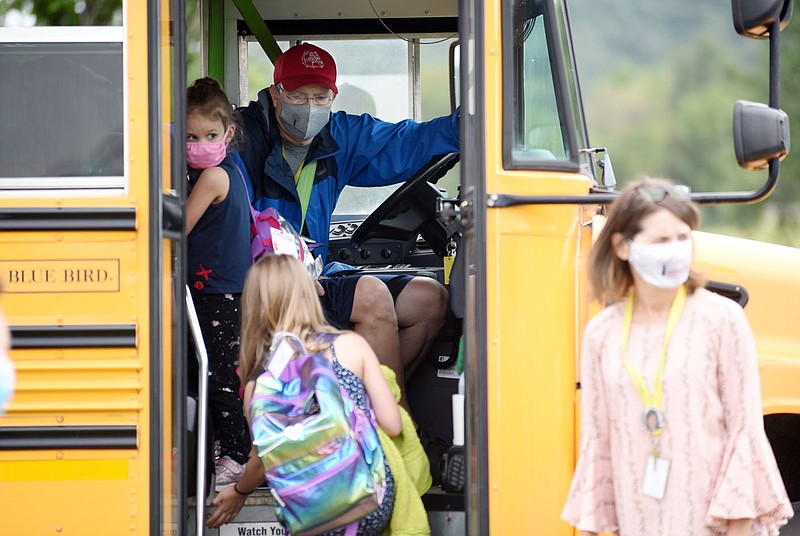 Rob Ariola, bus driver with the Springdale Public School District, greets students Tuesday, September 1, 2020, as they apply hand sanitizer while entering the bus for a ride home from Monitor Elementary School in Springdale. Check out nwaonline.com/200903Daily/ and nwadg.com/photos for a photo gallery. (NWA Democrat-Gazette/David Gottschalk)

All of the large districts in the region experienced a loss of staff this school year because of concerns about driving buses during the pandemic, according to administrators. They noted finding qualified drivers has always been a challenge.

Bentonville hires about 125 drivers and is short 21.

Bentonville drivers bid on preferred routes based on seniority as of Aug. 4, he said. The reality of driving a bus during a pandemic was a factor in the staff members deciding not to return, he said.

DeWitt said it's difficult to compare staff shortages this year to other years, noting Bentonville was fully staffed with bus drivers for the first time in 10 years last school year.

"I don't know that there's an apple-to-apple comparison," he said.

Fayetteville needs about six drivers to fill its 55 slots.

"Our staffing shortage is probably similar to past years," said Mike McClure, Fayetteville School District transportation services director, adding two staff losses this year were because of concerns about the covid-19 virus.

The bus driver shortage is slightly higher this year than in previous years for Rogers Public Schools, said Charles Lee, assistant superintendent for general administration. Rogers is short five drivers to fill out its staff of 90.

"Overall for the Northwest Arkansas area, covid-19 has hurt us and has contributed to a driver shortage, but at [Rogers], we have been fortunate that we did not lose a significant number," Lee said.

Springdale has about 150 bus drivers during a typical school year and they need about 22.

Kevin Conkin, Springdale School District transportation co-director, said the shortage is definitely higher than a typical year when the department's unemployment rate has been about 3%.

Driving a bus can be considered a high-risk job during the pandemic, Conkin said.

"I would call it a front-line worker," he said, noting there's always a chance a student with covid-19 could ride a bus.

Such a schedule makes it ideal for stay-at-home parents and retirees, DeWitt said. But the risk for severe illness or death from covid-19 increases with age, with older adults being at highest risk, according to the Centers for Disease Control and Prevention.

"This is a supplemental income," he said. "You've got a much smaller amount of money than a normal job, because you're only working four to six hours a day."

Starting pay for drivers averages about $16.10 per hour in Bentonville, $14.25 in Fayetteville, $14.29 in Springdale and $14.16 in Rogers, administrators said. Some of the positions include benefits.

The average hourly wage for school bus drivers is $14.37 in Arkansas and $15.98 nationally, according to Indeed.com, an employment search engine.

Bentonville, Fayetteville and Springdale have consolidated bus routes to ensure there are enough drivers to meet students' needs, administrators said.

"We've been blessed not to have to consolidate anything right now," Lee said of Rogers. Transportation staff from other areas who are qualified to drive buses are offsetting needs, he said.

Bentonville and Springdale are averaging about 50-60 students per bus, about the same as a typical year, administrators said.

Fayetteville and Rogers administrators said students attending online school and parents opting to drive their children to school has decreased bus capacity for their districts this fall. Buses in both districts are running at about 50% capacity, with about 35 students on each bus, administrators said.

"We have definitely seen a decline in the number of parents utilizing our transportation system, but that's been OK, because it's helped us with the social distancing aspect," Lee said.

Conkin said students are getting to school on time despite the consolidated routes in Springdale and they haven't caused students to ride the bus any longer than normal. On average, students ride the bus no more than 15 minutes one way, he said.

"Due to the decreased numbers of riders districtwide, students are on the bus a much shorter time than normal," McClure said of Fayetteville. "In past years, our last evening routes didn't return until close to 6 p.m. Those same routes are now back by 5:20 to 5:30."

DeWitt said consolidating routes in Bentonville has caused students to be on the bus for two to six minutes more than normal, but they're arriving to school on time.

Administrators said their districts are taking precautions to mitigate the spread of the covid-19 virus, such as opening windows a few inches to increase airflow, disinfecting buses between routes and fully sanitizing buses following morning and afternoon shifts.

"I feel like they're safer on the bus and in the classroom as they are anywhere," Conkin said, of district students and staff members.

Rob Ariola, 57, of Lowell is a bus driver for Springdale's Monitor Elementary, Lakeside Junior High and Springdale High schools. He said he's worked for the district about seven years.

"Your No. 1 goal on any normal day is complete safety for the kids," he said, adding that need has been heightened because of precautions to prevent the spread of the virus.

"You got all these things you're thinking about, plus loading them safely," Ariola said. "That's where most of the issues happen, when there are any accidents, loading and unloading."

Beyond making sure students stay safe by remaining in their seats, staying out of the aisles and facing forward, drivers now have to be aware of students sanitizing hands before getting on the bus and keeping their masks on throughout the ride, he said.

"I've had a few that I've struggled with, but they're getting there," Ariola said of students following safety guidelines.

He feels safe driving a school bus during the pandemic.

"I'm not going to run away afraid from it, but I respect it," he said of the virus. "I think it's real, and I think it's wise to be wise."

District administrators said some of the practices may be continued following the pandemic.

"However covid is resolved, we'll continue to do those kinds of things," he said.

Bentonville and Rogers created seating charts to assist with contact tracing efforts, a practice administrators said also helps keep track of who's riding the bus at any given time and creates more efficient routes.

"They are scheduling students to ride the bus as a placeholder, just in case they ever need to," he said. "What it does is create longer routes, longer ride times for kids."

Schools closed in March, but all the districts ensured drivers were paid, administrators said.

"Some of those responsibilities included facilities maintenance, such as landscaping and painting," she said. "The same will be done this year if schools close."

Fayetteville hasn't specifically addressed what will happen if it closes schools this school year, McClure said.

"When school was canceled back in March, we continued to pay all of our employees," he said. "I would hope that we might do that again, but there's no guarantee about that. It's possible we could furlough people."

Lee said Rogers drivers will continue to be paid if schools close.

Ariola said he was grateful for Springdale's efforts to pay employees during the closings.

"Some people had nothing. Some people lost everything," he said. "The school system did a good job taking care of us."

"The employees would be expected to work," he said. "Since bus drivers would not be able to perform their normal duties, we would look for other things for them to do."

DeWitt said he looks forward to the season beyond the pandemic.

"I hope we get to a point where we can get back to a normal or what we considered normal before," he said. "If not, then I hope we can continue with what we're doing and find ways to make it livable, find ways to make it palatable for all so we can all come to an agreement as humans that we're gonna protect each other." 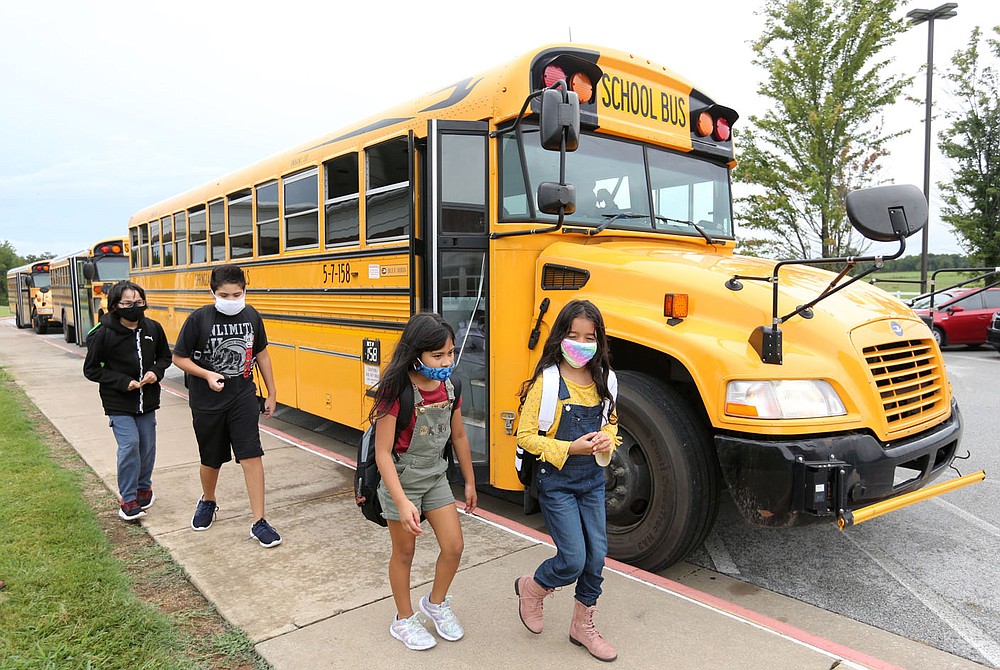 Students from Monitor Elementary School move to busses Tuesday, September 1, 2020, for a ride home in Springdale. Check out nwaonline.com/200903Daily/ and nwadg.com/photos for a photo gallery. (NWA Democrat-Gazette/David Gottschalk) 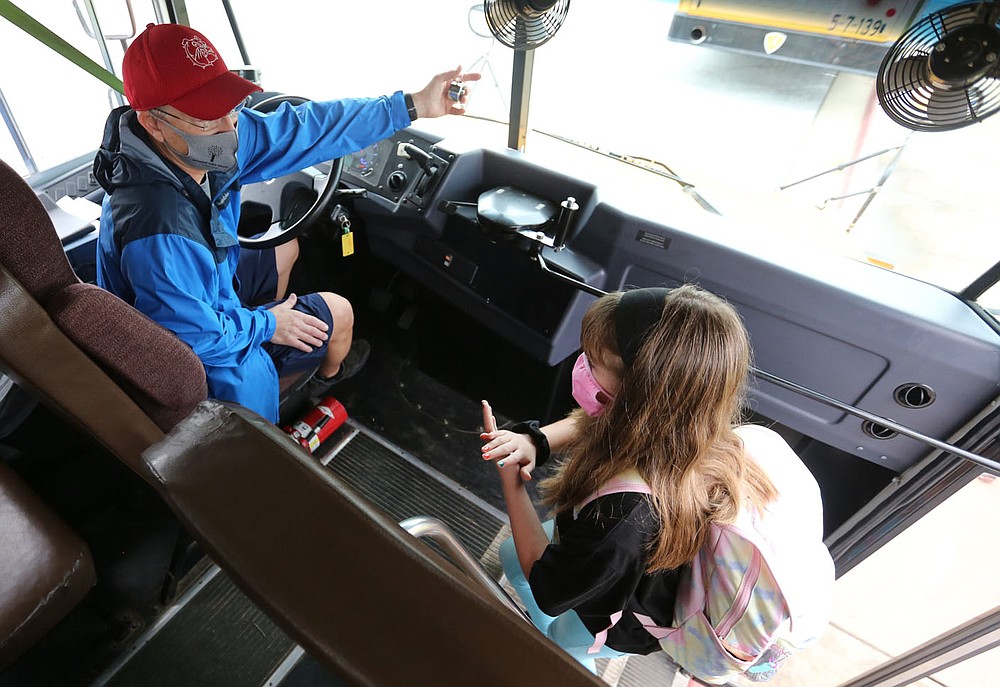 Rob Ariola, bus driver with the Springdale Public School District, greets students Tuesday, September 1, 2020, as they apply hand sanitizer while entering the bus for a ride home from Monitor Elementary School in Springdale. Check out nwaonline.com/200903Daily/ and nwadg.com/photos for a photo gallery. (NWA Democrat-Gazette/David Gottschalk) 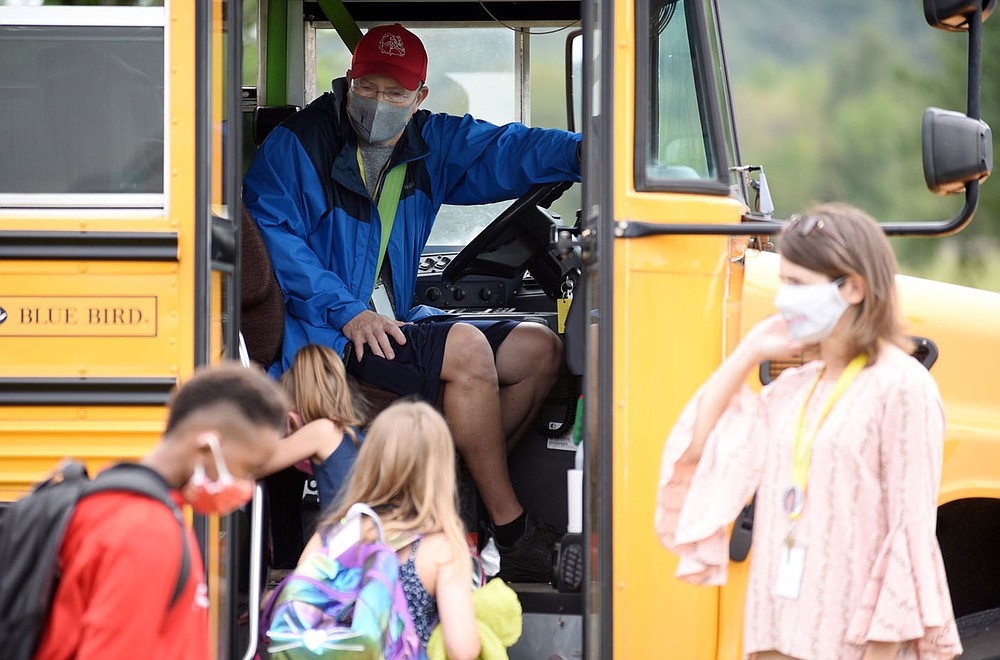 Get on the bus

Information for employment with Northwest Arkansas school districts is available online at: