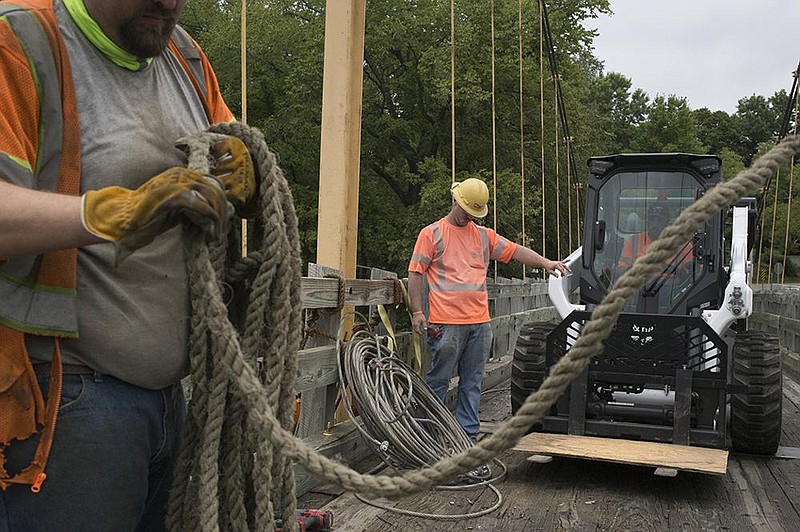 BEAVER -- The Arkansas Department of Transportation began prep work last week to replace the wooden deck and railing of the Beaver Bridge.

The timber deck hasn't been replaced since 2002, and the bridge occasionally floods.

Steve Lawrence, district engineer for the department, said the bridge has gone under water a few times over the past decade. It was closed from May 24 to July 22 this year because of high water.

Lawrence said he walked over the bridge Wednesday.

"There's actually ruts in the planks, the board, where traffic has been driving," he said. "Between the weather and the traffic, it has deteriorated the wood."

Completed in 1949, the yellow one-lane suspension bridge over the White River is a scenic spot featured on postcards and travel brochures. In the 2005 movie "Elizabethtown," actor Orlando Bloom tossed ashes from the Beaver Bridge into the river below.

It's known as the "Little Golden Gate Bridge." While the Golden Gate is almost 15 times as long (8,981 feet vs. 600 feet), there is a similarity in appearance.

"It's a very small version of the Golden Gate," Lawrence said.

The Beaver Bridge, on Arkansas 187, spans the White River at Beaver, a town of about 100 people in western Carroll County.

The bridge was built by Pioneer Construction Co. of Malvern, according to the Historic American Engineering Record.

"In 1850, Wilson A. Beaver established a ferry near this location on the White River," according to the record. "Beaver Ferry operated until 1926, when Carroll County built a concrete bridge at this site. After a flood destroyed that bridge in 1943, the Arkansas State Highway Commission erected the present bridge at a cost of $107,785."

The Beaver Bridge uses a set of two steel cables draped over two steel towers on concrete piers, according to the Engineering Record. The steel cables are anchored in concrete abutments buried in the ground.

"Each of the four main cables contain six individually stranded cables entwined together," according to the record. "From these double cables are suspended vertical steel rod tension members that support a steel substructure."

The bridge's timber deck was replaced in 1981, according to the record.

When it was added to the National Register of Historic Places in 1990, the Beaver Bridge was one of three wire-cable suspension bridges documented in Arkansas and the only one being used on a state highway.

Stewart Linz, a heavy bridge maintenance engineer with the highway department, said the work being done is "routine cyclic maintenance."

"Approximately 20 years of service life is what we expect from a timber deck," he said in an email.

According to the highway department, about 770 vehicles per day travel Arkansas 187 about 3 miles west of Beaver. There's not a traffic counter nearer the Beaver Bridge.

Normally, it's a short drive over the bridge from Beaver to Holiday Island, but with the bridge closed, it's an extra 20 minutes to take the long way around, said Tim Zmolek of Springdale, who works for Advance Pest Control and services clients in Carroll County.

Joe Ristau of Beaver said it has been inconvenient to have the bridge closed during the daytime for the prep work, but at least it's open at night and on weekends. This week the bridge will be closed from 7:30 a.m. to 5 p.m. daily through Thursday, weather permitting.

That will change when the deck work starts.

Timber for the deck is coming from a supplier in Lake Charles, La., so delivery could be delayed because of Hurricane Laura, Linz said in an email.

The plan is that beginning Sept 14 the bridge will be closed from 9 a.m. Monday to 5 p.m. Thursday (80 consecutive hours) each week until the project is completed, Linz said.

"It is anticipated that the work will take three months," he said.

Linz said the deck will be removed in 64-foot sections during the week. The steal beams will be cleaned and, if necessary, repaired. Then new decking and railing will be installed in that section.

Besides the deck, rail and beam work, he said the bridge's steel towers will get a fresh coat of yellow paint.