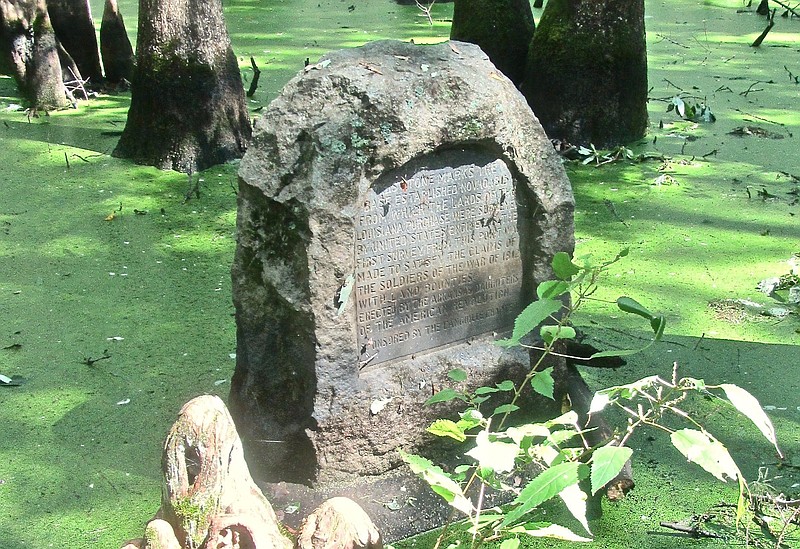 LOUISIANA PURCHASE HISTORIC STATE PARK — One of the most important landmarks from early U.S. history is tucked away amid a swamp about 90 miles east of Little Rock.

The site, among the smaller Arkansas state parks, is also an ideal location to maintain social distancing. You and your companions are quite likely to be the only people here — along with an aerial armada of mosquitoes.

Louisiana Purchase Historic State Park sits at the junction of three Delta counties: Lee, Monroe and Phillips. The 37-acre enclave, at the dead end of 2-mile-long Arkansas 362, has no visitor center and no onsite staff. A picnic table and toilets near the entrance are the only amenities.

The park ranks as a major landmark because it was the starting point in 1815 for the surveying required for settlement of the Louisiana Purchase Territory's 827,000 square miles. That vast expanse, bought by President Thomas Jefferson in 1803 from French Emperor Napoleon Bonaparte, nearly doubled the size of the United States. The cost — $15 million — amounted to about $19 per square mile.

When the federal survey began, Arkansas was still four years away from becoming a U.S. territory. The immediate purpose of the project was to facilitate the mapping of land claims by veterans from the War of 1812.

To reach the site of today's state park, surveyor Prospect K. Robbins traveled mainly by boat north from the mouth of the Arkansas River. Fellow surveyor Joseph C. Brown proceeded west from the mouth of the St. Francis River to meet him. Their wilderness junction became ground zero for platting what would become all or part of 13 states.

"Only after this point was established and surveys conducted outward from this point," explains a sign along the zigzagging 950-foot boardwalk, "could land grants be issued; settlers, prospectors and ranchers stake a claim, or towns be platted."

From the zigzagging boardwalk's end, visitors can view a plaque attached to a stone by the Daughters of the American Revolution in 1926. That was 14 years after the long-forgotten site had been rediscovered by two surveyors who came across the trees that Robbins and Brown had marked.

Along with its human history, the park's natural history is also noteworthy. The location offers a vivid example of the primordial landscapes that confronted explorers, trappers and other pioneers two centuries ago in what is now the Arkansas Delta.

Most distinctive about the setting is that it preserves one of the state's few remaining headwater swamps, which were common in the Arkansas Delta before the advent of wholesale drainage and clearing for agriculture. Headwater swamps rarely see deep flooding. But they rarely dry up, in contrast to the more common backwater swamps that come and go in flood plains.

Along the boardwalk, one sign urges visitors to "take a moment to look at the unusual plants and listen to the sounds of life in the swamp." One possible sound is a sharp, birdlike whistle from above — not made by any flying species but rather by male bird-voiced treefrogs, a threatened species less than 2 inches long.

Bird-voiced treefrogs are colored gray-brown or green with a dark "X" or star-shaped mark on their back. They can change color from gray to green depending on temperature, moisture and background. Females lay as many as 500 eggs, which float in packets in the swamp water — much as when Robbins and Brown met here two centuries ago.

Getting there: To reach the park from Little Rock, take Interstate 40 east to Exit 216 at Brinkley. Continue south on U.S. 49 to Arkansas 362 and go east 2 miles to the park at the end of the highway.