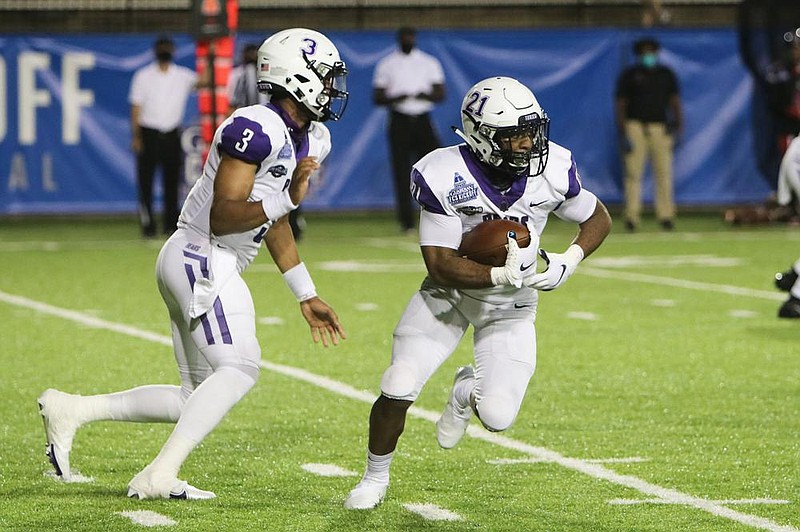 Central Arkansas’ Kierre Crossley (right) carries last week against Alabama-Birmingham. The Bears are off this week before taking on Arkansas State on Sept. 19. (Photo courtesy of the University of Central Arkansas)

University of Central Arkansas football Coach Nathan Brown admitted his team looked tired at times during the second half of last week's road game at the University of Alabama at Birmingham, but he's not about to make excuses for his team's 45-35 loss.

But considering the circumstances his Bears have faced over the first two weeks of the season, he would be within his right to do so.

UCA (1-1) is getting a breather this week after having played two games in a five-day span before almost everybody else played one. The Bears opened 2020 against fellow Football Championship Subdivision member Austin Peay on Aug. 29 and followed with Football Bowl Subdivision foe UAB last Thursday. They Bears won't play again until Sept. 19 against Arkansas State University in Jonesboro.

The bye week couldn't have come at a better time.

"It's tough in general to play two games in five days," Brown said, "but to play those teams, that was tough. My guys knew we were behind the eight-ball, but we didn't talk about it a whole lot because that's not something you want to dwell on leading up to a game. But you look at Austin Peay, a top 12 team in the FCS, and then UAB, one of the best teams in Conference USA.

"Both of those games were physically and emotionally draining for us, particularly because they were close games. So to get a little break right now and have some time to rest up and recover is a big plus."

The Bears were steady throughout their opener against the Governors, whom they outgained by nearly 130 yards in earning a 24-17 victory.

But there appeared to be moments of fatigue against the bigger Blazers in the second game, especially during a third quarter that saw UCA generate just 5 yards of offense.

"We tried to fight through it," UCA junior quarterback Breylin Smith said. "Playing back to back like that, it was definitely tough. In the moment, you get to a point where you don't really think about it. You know you've got to go out and perform, but of course, your body can only do so much.

"From the body standpoint, when you don't have your normal June and July practices, it can be difficult to maintain a high level of play."

UCA recovered to put together a pair of scoring drives in the fourth quarter against the Blazers, who tried to wear down the Bears on the ground. UAB ran for 233 yards, including 130 yards from the team's career rushing leader Spencer Brown.

Senior defensive back Robert Rochell said not having to deal with an opposing running back for the next nine days doesn't hurt his feelings.

"It feels good, actually," he said. "This will let us get a chance to get our legs back up under us. We had to shift our focus quickly, going from one team to the next like we did.

"UAB was a fresh team, and we'd just came off a big game. We had to get our bodies right as fast as we could in order to compete, and we tried our best. Now we can kind of recover some during this week."

The team got a day off Saturday, and has been holding light workouts and meetings since in preparation for next week's showdown with the Red Wolves.

"I think we've got a good head start because we've played two good teams," senior running back Kierre Crossley said. "Most of the teams that are playing football right now have only got one game in. That gave us an opportunity to get our mistakes out early and see where we really are as a team.

"We had that quick turnaround last week so we need this week to try to just catch up and get our bodies back to where they need to be. We're definitely going to take advantage of it."