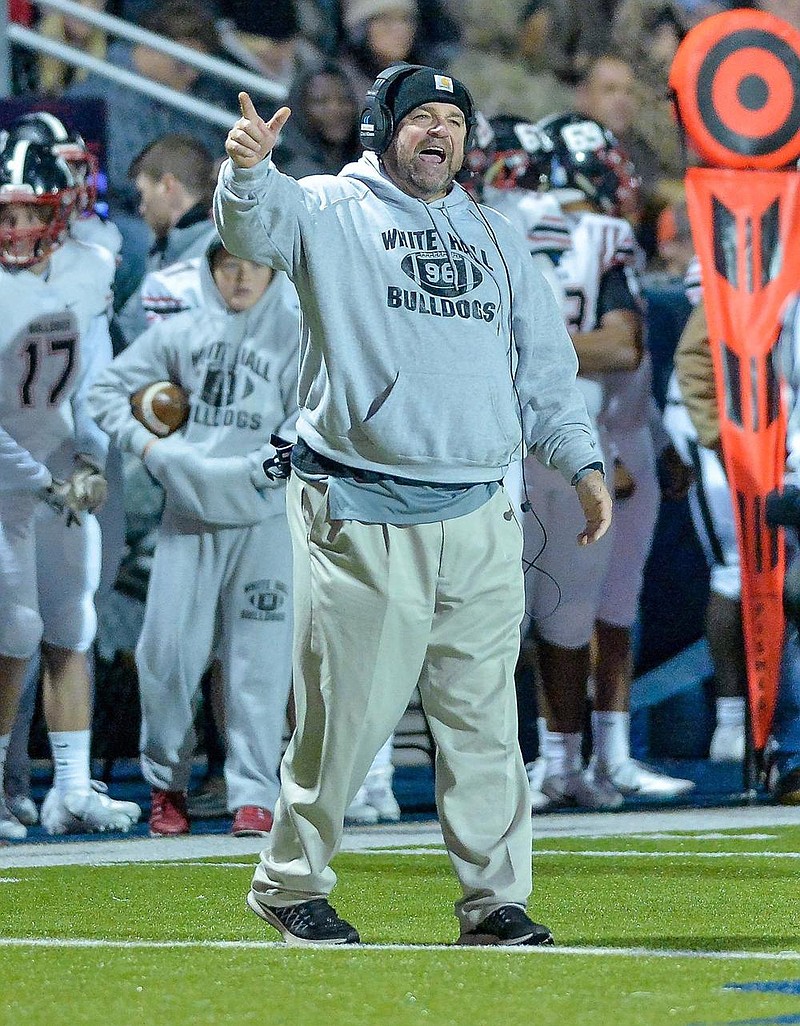 White Hall Coach Bobby Bolding has seen the Bulldogs jump out to a 2-0 start this season.

But the veteran coach, who has led two schools to state championships, said there's work to be done as they get ready for the 5A-Central Conference schedule.

"But going back to last year, we've got confidence and they believe in what we're doing."

The Bulldogs allowed 264 yards in a 17-6 victory at Warren on Friday. They've allowed 23 points in two games against Sheridan and Warren, both on the road.

White Hall, which advanced to the Class 5A semifinals a year ago, is at home for the first time this season tonight as it takes on Little Rock Parkview.

It's a matchup that features the Bolding brothers, Bobby and Brad, who coaches at Parkview.

Since the two brothers were at Pine Bluff (Bobby) and North Little Rock (Brad), respectively, their teams have played each other. The matchups continued when Bobby went to White Hall last season and the Bulldogs were part of the 5A-Central along with Parkview.

Tonight's game is a nonconference matchup as Parkview has moved up to Class 6A. Little Rock Parkview is 1-0 after a commanding 49-0 victory at Little Rock Southwest, with senior quarterback Landon Rogers accounting for three touchdowns (two rushing, one passing).

The series between the Boldings is 3-3, with Bobby's White Hall team winning 28-27 last season. Brad had won the previous three games, all at North Little Rock in 2012-14 and when Bobby was at Pine Bluff.

However, Bobby doesn't look at the game as a matchup with his brother.

"It doesn't even cross my mind," he said. "It was a cool thing the first few times we did it. But now, we are coaching against each other. It's not a big deal to us."

The game is scheduled to be televised on KARZ-TV. It's the second consecutive season that White Hall has been on KARZ-TV, with their home game against Sheridan last season also on the Little Rock TV station.

"That's a great thing for our kids," Bobby Bolding said. "They're excited for it. It brings out the spirit in the school and the community. We're excited for the opportunity."

Cedric Simmons is only a sophomore, but he's impressed Malvern Coach J.D. Plumlee on and off the field.

The Leopards quarterback started as a freshman a year ago and led his team to the Class 4A playoffs.

Plumlee said because of covid-19, Simmons didn't spend a lot of time with the Leopards in the spring after the basketball season ended.

"He didn't get the spring football or summer football to work on throwing the ball," Plumlee said. "He's still developing on the fly. He makes us go.

"He has to perform well for us to have a chance to win."

What impresses Plumlee more than Simmons' play on the field is what he does off the field.

Malvern (1-0) travels to Lake Hamilton (1-0) on Friday. Plumlee said that the Leopards are looking at the matchup as a chance to go up against a Class 6A team and see where they're at after two games.

"This game won't make or break us," Plumlee said. "We will get better at what we do. For us to be able to play a football game on a Friday night right now, we have to seize that opportunity."

Monticello's veteran leadership has Coach Randy Harvey excited about the Billies in 2020.

The Billies have 17 seniors on this season's team. After a 2-0 start with victories over Lake Village and Bauxite, Harvey credits a strong offseason for the Billies' performance early on.

"We've grown up," Harvey said. "At times last year, we got outnumbered. But we worked extremely hard in the weight room in the offseason."

Junior quarterback Stran Smith completed 13 of 17 passes for 250 yards and 3 touchdowns. Classmate Doerian Allen caught 4 passes for 145 yards and a touchdown, and also rushed for 92 yards on 9 carries.

The Billies had a 20-7 lead, but the Miners came back to tie the game at 20-20 in the second half. However, Harvey saw a difference between the 2019 team that went 2-8 and this season's team.

"Our Achilles' heel last year, we lost our head," Harvey said. "But this year, we held on."

Monticello is off this week and faces Class 2A state champion Fordyce on Sept. 18. Harvey said the open week comes at a good time for the Billies, even with a 2-0 start.

Harvey believes the Billies can be a contender in the 4A-8 Conference this season.

"I like our chances," Harvey said. "They [the players] want to win. They expect to win."

For the third consecutive week, there are high school football games affected by the coronavirus pandemic in the state.

Four games were canceled Wednesday -- Walnut Ridge at East Poinsett County, Smackover at Hampton, Riverview at Bald Knob, and Osceola at Gosnell -- because of a case or cases, or exposure to covid-19.

Walnut Ridge Superintendent Terry Belcher said two football players at the school tested positive for the virus over the weekend. Coach Jeff Blake told Belcher that there were at least 13 players who are having to quarantine after coming into contact with the two infected players.

The Bobcats' next game is scheduled for Sept. 25 against Palestine-Wheatley in their 3A-3 Conference opener.

Bald Knob Coach and Athletic Director Lynn Garner said the Bulldogs' game against Riverview was canceled because a Bald Knob student tested positive for the virus.

The school said in a news statement Wednesday that 10 athletes have been quarantined after being in close-contact with the infected student.

Smackover announced that the football program had received exposure to covid-19 and that the Buckaroos' game against Hampton would be called off.

Coach and Athletic Director David Osborn did not return telephone calls from the Arkansas Democrat-Gazette to discuss further details.

However, Hampton was able to find an opponent in place of Smackover and will play at Cross County at 4 p.m. Saturday.

Then, later Wednesday night, Gosnell announced that Osceola had canceled the game between the two teams Friday night, which was scheduled to be played at Gosnell because of "covid-19 issues."

Gosnell Coach Lewis Earnest said he learned of the news at about 6 p.m. after the Pirates' practice.

"It's extremely disappointing," Earnest said. "The kids had worked so hard for three days. Our guys are coming off an 0-2 start. We were going to play a county rival [Mississippi County]."

Earnest said that he hopes to be able to find a game for next week. Sept. 18 is the Pirates' open date.

Osceola Superintendent Alfred Hogan did not return a telephone message from the Arkansas Democrat-Gazette on Wednesday night.

In all, five games have been affected by covid-19 this week, including Fort Smith Northside-Greenwood. But Greenwood was able to reschedule with Springdale Har-Ber after Northside canceled because of what the Fort Smith Public Schools district called "concerns with covid-19" in the program.

In the previous two weeks, there were eight games canceled thanks to the virus. Schools that had to cancel a game in the past two weeks included Harding Academy, Clarksville, Fountain Lake, Cross County, Danville, Berryville and Forrest City.

Little Rock Christian is playing its first home game of the season Friday night against Magnolia. However, it's Magnolia's second appearance at Little Rock Christian's Warrior Field in 2020 after playing Harrison on Aug. 28, a 42-35 loss for the Panthers. Little Rock Christian (2-0) has earned victories so far at Little Rock Central and Searcy. ... Junior running back Tyler Williams has been Central Arkansas Christian's go-to player in the Mustangs' first two games. Williams has rushed for 284 yards and 5 touchdowns on 40 carries. The Mustangs (2-0) host Carlisle on Friday. ... Senior running back Darryl Kattich rushed for 163 yards and 3 touchdowns in Cedarville's 34-6 victory over Mountainburg last Friday in a game that was called because of lightning in the third quarter. Kattich also caught a touchdown pass. He has rushed for 417 yards and 10 touchdowns for Cedarville, which is 2-0 so far.