Fun of a gun: Modern firearms offer the best chance of taking venison 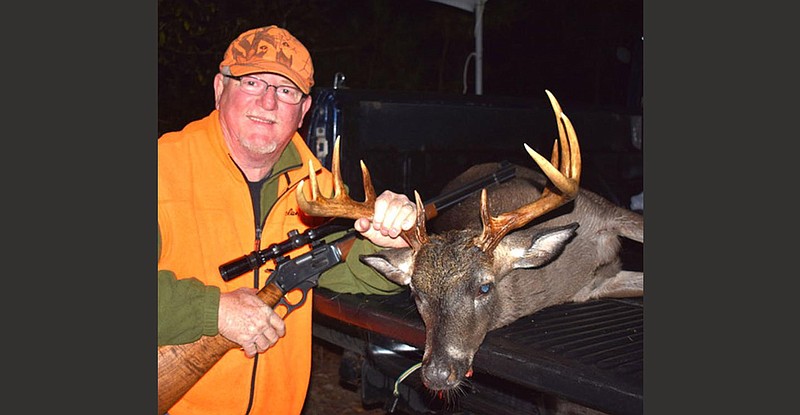 Most deer are killed during the modern gun deer season at less than 100 yards. Mild power cartridges like the 30-30 in a handy lever-action rifle are ideal for hunting whitetails in Arkansas forests. (Arkansas Democrat-Gazette/Bryan Hendricks)

Hunters kill the biggest percentage of deer annually in Arkansas with modern firearms.

If you are new to hunting, you are probably also inexperienced with firearms. If you were not raised in a hunting family, firearms might even intimidate you.

Understand that a gun is a specialized tool. Like any tool, there is a right way and wrong way to use it. Used correctly, it is safe to the user and to non-users. A hunter education course covers the basics of safe gun handling, but like all disciplines, proper gun handling must be practiced and reinforced. To be proficient with a rifle or shotgun you must practice with it.

The best place to practice is at a shooting range. There are public and private ranges all over the state. There you will meet experienced hunters who will be happy to provide coaching and instruction. The Arkansas Game and Fish Commission owns and operates an excellent facility at Mayflower. That is a tightly controlled environment, and it is an excellent place to learn and refine shooting skills.

Obviously, the first question for a new hunter is what gun to buy. There are many styles and brands, and there is a vast choice of cartridges. For new and novice hunters, I recommend a cartridge with mild recoil that is capable of killing deer cleanly with any ethical shot at an ethical range. The 6.5 Creedmoor is an excellent choice. Every major gun-maker chambers for the 6.5 Creedmoor, and ammunition is widely available. So popular is the Creedmoor that it dominates the shooting market, and it is here to stay. The 243 Winchester is also an excellent choice, as is the 25-06 Remington. Any of those three will serve you well for a lifetime.

As for the rifle itself, a bolt-action sporting rifle is easy and safe to handle, with intuitive safety mechanisms. It requires manually feeding a round into the chamber by turning and locking a bolt, and you extract a spent case by turning and pulling the bolt. With practice, you can operate a bolt quickly and keep it on target, but practice also makes quick firing unnecessary. One shot per deer should be all you need.

You can spend as much as you want on a bolt-action rifle. You won't go wrong with well-known brands such as Remington, Ruger, Winchester and Browning. Mossberg and Tikka rifles are less expensive, but their quality is excellent and they are accurate.

A single-shot rifle is the safest and easiest to use. Single-shot rifles are not as common as they once were because of the bolt-action's popularity. They are not as fancy or as pretty, but they are foolproof, and they are often very accurate. A single shot contains a barrel and a block with a hammer that fires the cartridge. To load and eject a cartridge, depress a lever and rotate the barrel away from the block and insert a cartridge. A mechanical ejector flings a spent cartridge out of the breech.

It is the simplest design, and it is very easy to clean. Since it has no repeating capability, a single-shot forces you to take ethical, high-percentage shots. Best of all, single-shot rifles are cheap. The most popular brands are H&R, New England Firearms and Rossi. You can usually get one with a scope for about $300, depending on the scope.

You can also buy semi-automatic rifles. The AR-15 and AR-10 are the avatars for this genre. They are military-style rifles, but you can get more traditional designs from Remington and Browning. They fire and cycle a cartridge with a pull of the trigger until the magazine is empty. It is not the best choice for new or novice hunters.

A shotgun is another option. You can buy rifled barrels for many popular shotguns that allow you to shoot saboted slugs. This gives you rifle-grade accuracy to about 200 yards. For hunting in thick cover, buckshot is popular and effective.

Most hunters use telescopic sights on their rifles and slug shotguns. You can spend thousands of dollars on a scope, but a basic Bushnell Banner 3-9X40 for about $100 is all most hunters will ever need. I use them on several rifles and muzzleloaders. They hold zero season after season, and they are clear. Louis Janski, manager at Fort Thompson Sporting Goods in Sherwood, said he has sold thousands of Bushnell scopes. Customers like them, Janski said, and they are dependable. They come with a one-year, no questions exchange warranty. After that, they have a lifetime factory warranty. Vortek, Leupold, Burris and Nikon are also very popular.

Of course you will need ammo. The selection is mind boggling, but for hunting, keep it simple. Hunters have killed more deer with Remington Core-Lokt and Winchester Power Point than anything else. That is old technology that endures because it works. Federal Power-Shok is excellent, as is Federal Fusion, which features an inexpensive bonded bullet that works much better than its low price suggests is possible.

Sniping game at long range is all the rage in the hunting media, but in Arkansas most of your opportunities will be less than 150 yards. If you hunt in the woods, most of your shots will be less than 100 yards. When sighting in your rifle, adjust your scope so that your shots strike about 2 inches high at 100 yards. This will give you a dead-on zero at about 200 yards while placing everything in the kill zone at 100 yards. For shots 25-50 yards, you'll have to compensate by aiming a few inches high.

The prime directive when hunting with firearms is that safety is paramount. Make sure that your target is a legal deer before you even raise your rifle. Ascertain your target with binoculars. Do not make initial contact by looking through your riflescope. Do not ever shoot at sound or movement. Do your part to ensure that you and everyone that hunts near you gets home safely.