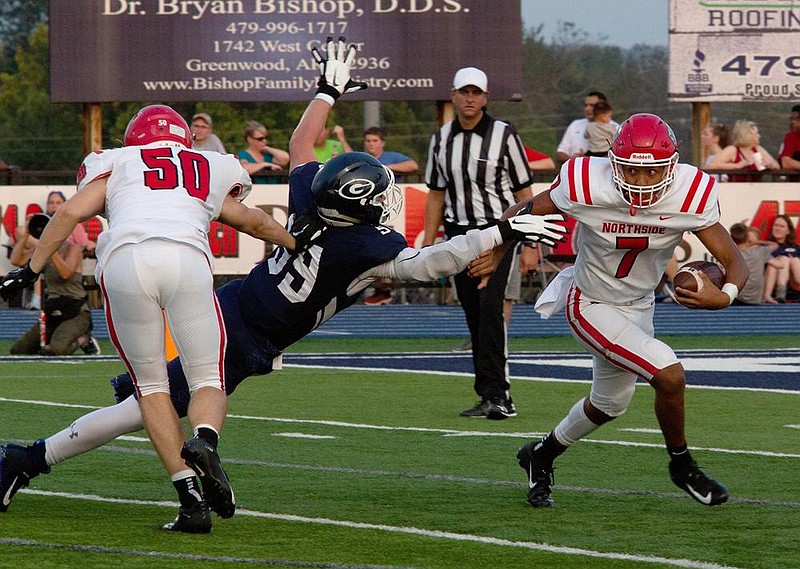 Prep football coaches knew there would be bumps in the road in 2020 while trying to play a contact sport in the midst of a pandemic.

That hit home at Fort Smith Northside this week as the Grizzlies (1-0) were forced to cancel its scheduled game at Greenwood after several coaches tested positive for covid-19. The team was unable to practice because of the virus and its impact on the coaches, but coach Mike Falleur said the Grizzlies are hopeful to resume conditioning today.

"My problem is coaches," Falleur said. "We don't have any coaches. They are sick and quarantined."

Northside opened the season on Aug. 28 with a 35-7 win against Southside. With a game this week canceled, and the prospects not looking promising for a game next week, Falleur said it's likely the Grizzlies will not play another game until it opens 7A-Central play against two-time defending state champion Bryant on Sept. 25.

"Obviously knowing what we're dealing with going into it, you always knew there was a chance this could happen," Falleur said, "but when it happens, it just kind of hit you in the face. I don't care how much you thought about it, you don't really think it will happen. Then bam, it goes and it hits you.

"It's disappointing for our kids who are kind of lost right now. They don't have a lot of direction, but we're going to get them going back in the right direction."

The covid-19 issue hit Northside on Sunday afternoon when several coaches on the staff tested positive. That led to others being quarantined, Falleur said.

Falleur said the Grizzlies would use this setback as motivation moving forward toward the rest of the season.

"We're just telling the kids, 'hey, this something we got taken away from us,'" he said. "We told them we need to go back at this with a vengeance. We've got seven games left, and who knows if this happens again. Hopefully it doesn't, but every chance you get, every opportunity you get, you better take advantage of it."

Springdale coach Zak Clark graduated in 1999 from Fayetteville High School, where he was an all-state quarterback for the Bulldogs. His coach at the time was Mike Adams, the coach at Farmington.

Coach Adams and his former player will be on opposite sides of the field tonight when Springdale plays at Farmington in a non-conference game. It's the first meeting between Class 7A Springdale and Class 5A Farmington, which is 1-1 on the season after losing 19-7 at Prairie Grove. Springdale is also 1-1 following its 46-18 win over Choctaw, Okla.

Clark and Adams talk frequently and the two agreed to play after both teams were scrambling late for games after being dropped by opponents. Farmington will play next season at Jarrell Williams Bulldog Stadium.

"Mike's had a big impact on career as a player and coach," Clark said. "I wasn't very good in junior high, but I played football because that's what everybody did. Mike is the one who worked with me and taught be to believe in myself."

Springdale is led by Ladarius Wonsley, an all-state receiver who caught 73 passes for 986 yards and 10 touchdowns as a junior. Andre Sparks rushed for over 100 yards and two touchdowns last week against Choctaw, Okla., while Trevon Westbrook returned one of his two interceptions for a touchdown.

Farmington is hoping to generate some offense after being held to one touchdown against Prairie Grove. The Cardinals were more productive the previous week in a 24-6 win over Rogers Heritage, another Class 7A school.

"They've been up-and-down like us," Clark said of the Cardinals. "But they've got very skilled athletes, especially at receiver, and they're getting some offensive linemen back. This game is different in that we don't have a lot of common opponents. It's kind of the unknown."

Bulldogs adjust on the fly

Greenwood coach Chris Young got a reminder this week that plans can be disrupted quickly, especially in this year of the covid-19 pandemic.

In a matter of hours, he got word Fort Smith Northside would be canceling its game with the Bulldogs on Friday because of covid concerns. Young was able to find a replacement game quickly with Springdale Har-Ber.

"It's something we knew was a possibility," Young said. "It's just something you don't think will happen until it happens.

"We got a call Sunday saying that Northside wouldn't be able to play. Then I got with my AD Sunday night and I told him 'We'll play anybody.' We just want to play. Luckily we visited with coach (Chris) Wood and they were supposed to play Northside next week. We really appreciate them coming to play."

Young credited his coaching staff for putting in some long hours over the weekend to switch gears and put together a game plan for a different opponent. But it's important to give his players -- especially the seniors -- every opportunity to play this season, Young said.

"My defensive coordinator stayed up until 4 in the morning," Young said. "And we met up here at 8 in the morning on Monday. We're going to do whatever we can do to give our kids a chance.

"This year brings new meaning to the words play every game like it might be your last."

Young was generally pleased with his team's performance in the season opener, a 42-3 win over Class 7A Fort Smith Southside.

"We spread the ball around to our playmakers and the defense flew around to the football," Young said. "We held them under 100 yards. We've gotta clean up the punt returns."

Paris won three games all of last season, but the Eagles have a shot to equal that total in the first three weeks with a victory on Friday night against equally surprising West Fork.

Paris coach Tyler Clark said his team has found a little confidence, winning its first two games by a combined score of 94-18.

"They are kind of reaping the rewards of their perseverance," Clark said. "They've made a lot of progress. These seniors were sophomores when we went 0-10 my first year here. They saw a little success last year, not a ton.

"The junior class has a lot of athletes. As sophomores they went through some growing pains. There's a big difference between junior high and senior high, but they have adjusted."

Quarterback Chase Watts is one of those juniors who has made great progress, Clark said.

"He looks like a completely different kid," Clark said of Watts. "He's much calmer and making better decisions. I think the game's slowed down for him."

"We've got some size," Clark said. "We probably average around 6-2, 250. They're doing a good job technique-wise, too. But the bad things is those are the same kids playing on the defensive line, too. It's just something we have to deal with."

Paris takes on former 3A-1 Conference foe West Fork on Friday, a team it defeated 45-6 a year ago. It's a big game for both teams since the Tigers also have a chance at a 3-0 start, coming off an 0-10 finish last season.

The two teams also have more in common than recent struggles, too. Clark and West Fork coach Justin Smith coached together on the same staff for two years at Marion before both coming to Northwest Arkansas.

"We talk weekly," Clark said. "They are a good looking ballclub. We will have our hands full."

Matt Williams said he's been at Huntsville a while, but he couldn't recall the last time the Eagles caused a running clock in the second half and enjoyed a blowout victory.

That made Friday's 38-0 romp of Clinton even more enjoyable as Huntsville (1-1) snapped a nine-game losing skid.

"I've been on the other end of those games a number of times," Williams said. "But this feels good. The kids deserved to get because they have worked hard."

Slayter Watkins led the Eagles with 184 yards rushing, 47 yards receiving and two touchdowns. He had an 80-yard touchdown run and a long touchdown pass, but his most impressive play was one that didn't result in a score.

Watkins raced down the near sideline and knocked a pair of Yellowjacket defenders over with stiff-arms before he was tackled near the Clinton 15.

"That's a drill that we actually work on in practice," Williams said. "He delivered a couple of good stiff-arms on that run, and it was great to see him do it. He was definitely a workhorse."

The Eagles will close out their nonconference portion of the schedule by facing Lincoln, a team Huntsville replaced in the 4A-1 Conference.

"Lincoln is one of those teams we have faced a few times over the years," Williams said. "The last two teams we have played have run the wing-T, while Lincoln is a spread team. It's going to be a challenge for us, but we want to build on what we did last week."

Justin Bigham knew he inherited a young team when he became Gentry's coach, and he expected to play about five or six sophomores this year.

The Pioneers, however, had 10 sophomores in the starting lineup Friday as they rallied from a 27-14 fourth-quarter deficit to take a 28-27 victory over Lamar.

"We're a pretty young team with only seven seniors on the roster," Bigham said. "And we had only one senior on the field Friday night.

"These kids played awesome. We have some good sophomores, and they don't know how good they are. This was big for them, and it was fun to see the excitement on their faces because they never gave up. They jumped in and did everything they were asked to do."

Ty Hays and Dillon Jarnagan, both sophomores, connected for two touchdown passes in the fourth quarter, including one on a fourth-and-goal play from 9 yards out with a minute remaining. Hays, who completed 17 of 20 passes for 183 yards, scored the two-point conversion to give Gentry (1-1) the lead after a pass interference call on the first two-point attempt gave the Pioneers new life.

Bigham also pointed out Chris Bell, another sophomore whose only pass reception came on a fourth-and-4 play and kept a drive alive. Gentry had six sophomores start on offense and five on defense.

"These are such good kids," Bigham said. "Play like this is going to pay big dividends."

Wright at QB for Wolves

Levi Wright has moved from part-time to full-time quarterback at Lincoln, which evened its record at 1-1 with a 21-0 victory over Westville, Okla.

Wright is a 6-foot-4, 230-pound senior who was listed as a fullback and tight end before the season. Wright gained some tough yardage while taking snaps against Elkins and that prompted Lincoln coach Reed Mendoza to make the switch between Wright and Tyler Brewer, a left-hander who threw a 67-yard touchdown pass to Daytin Davis against the Elks.

"Levi provides a different dynamic at quarterback for us," Mendoza said. "He can pick up five, six yards just on a run into the line of scrimmage. Tyler showed a lot of maturity with the change, and we're going to use him a lot at tight end, H-Back, and in the slot at receiver. He'll be ready at quarterback, too, if needed."

The move paid dividends last week when Wright guided a balanced offense in the win over Westville, Okla. Wright threw for 121 yards and two touchdowns, including an 11-yard scoring pass to Brewer.

The Wolves will need some more offensive production against Huntsville, which blasted Clinton 38-0 last week. Huntsville led in that game, 35-0 at halftime.

"Huntsville is not super complex in what they do, but they do things right," Mendoza said. "They look much improved."