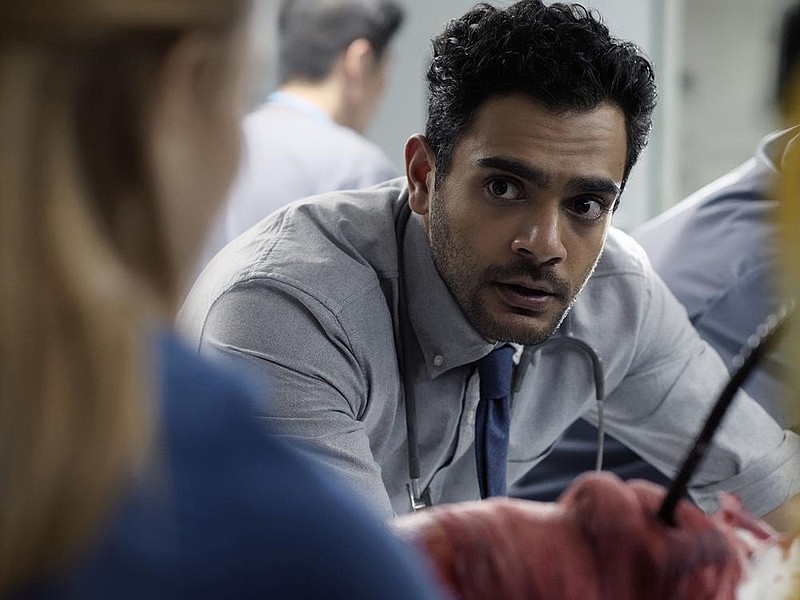 The first surgery on "Transplant" takes place amid debris. A truck has just crashed into a restaurant, and an injured diner is suffering from a potentially fatal brain bleed. A man then makes a quick decision: with his flashlight firmly in his mouth, he makes a hole in the head of the "patient" -- using, of all things, a power drill.

Thankfully, that man is actually Bashir "Bash" Hamed, a Syrian doctor of emergency medicine who fled his war-torn homeland for Toronto, where he is attempting to redo his residency. And since even the most diversely cast medical dramas are built around white protagonists, "Transplant" -- which premiered Sept. 1 on NBC -- is as unconventional as the aforementioned procedure it depicts: It puts an immigrant, and his largely underrepresented perspective as a person of color, front and center.

"Bash is the character who has been in every single show that we've ever seen in any genre, but this time he is the one who's in the spotlight," said Hamza Haq, the 29-year-old actor who stars in "Transplant." The series, acquired by NBC as many American TV series remain in limbo because of covid-related filming interruptions, first aired this spring in Canada, where it became the most-watched new Canadian series of the 2019-2020 season. Said Haq, "We're hoping for a similar reaction in the States -- if not in numbers, then at least in emotion."

"Transplant's" unique perspective allows for it to tackle a number of plot lines that haven't been seen before in the venerable medical drama genre, at least not in this way -- including what Haq called "a polarizing political aspect" that may register differently with viewers in the U.S. Bash's analog approach clashes with that of his colleagues, for instance, who routinely rely on computer imaging and other technology. Microaggressions on the medical floor are a regular part of his shift. And the thought of anyone being against vaccines -- the most coveted of supplies in his home country -- is a completely baffling concept.

"The fact that there's people who don't want them when other people are dying and need them is just an earth-shattering piece of information for him," writer and showrunner Joseph Kay said of the episode in question, which sees a child admitted to the hospital with diphtheria, a disease that's been nearly eradicated, after his parents fail to have him vaccinated against the illness.

The subject of who should tell which stories on TV remains fraught, of course, both in the U.S. and in Canada. Asked about representation in the "Transplant" writers' room, a representative for NBC confirmed that there are no Syrian writers on staff -- though consultant Ahmad Meree, an established Arabic-language playwright, and the series' story coordinator are both Syrian. For his part, Kay emphasized the importance of the first-hand experiences of the Syrian doctors and other immigrant medical professionals who actively consult on scripts, from concept through post-production.

Meanwhile, Haq immersed himself in books and documentaries about Syria and spoke with numerous Syrian refugees about their experiences.

"My biggest concern was trying to do justice to the trauma that everybody who comes from that part of the world is experiencing, as well as anybody who has been forced to flee their country and find their own footing," said Haq, who was born to Pakistani parents in Jeddah, Saudi Arabia, and worked with numerous Syrian dialect coaches to nail Bash's specific accent and native language of Arabic.

"Transplant," which includes a number of Muslim staff writers, also joins recent titles like Hulu's comedy "Ramy" and HBO's limited series "The Night Of" in centering on a Muslim character. Some of the show's religion-related storylines come from Haq himself -- a departure for the actor, who previously rebuffed praying onscreen.

"I'm Muslim, I'm practicing but I'm not the best at it; I try to pray a couple times a day," he said. "But religion is such a personal thing, and the writers allowed me to speak to my personal connection with my religion. I thought that was a very generous thing for them to do regarding this blanket thing that people tend to do with a character."

The series is finalizing plans to film its second season on a Montreal soundstage while abiding by covid-19 production guidelines. "Luckily, our set is full of glass walls, so it's easier to separate people and social distance while still getting the hustle and bustle of an emergency department," Kay said.