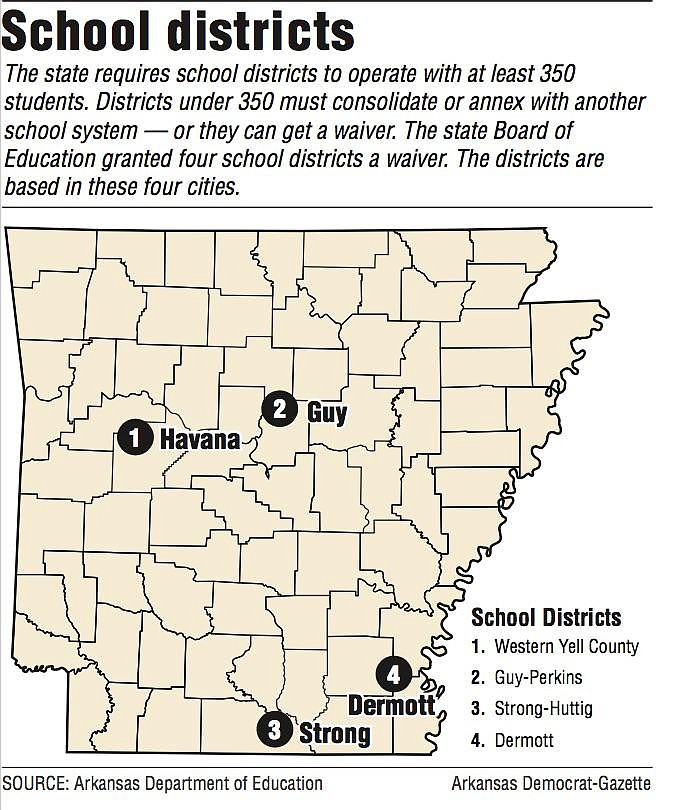 The Arkansas Board of Education voted Thursday to award waivers to four districts that have total kindergarten-through-12th-grade enrollments under the 350-minimum that is legally required for a district to continue to operate.

Receiving the waivers were the Western Yell County, Strong-Huttig, Guy-Perkins and Dermott districts.

Arkansas Code Annotated 6-13-1603 requires districts that have had fewer than 350 students in the two preceding years to consolidate or be annexed to another district -- unless the district is granted a waiver by the Education Board.

The board is required to grant a waiver to an applicant district if the district has adequate facilities, is not designated as being in fiscal distress, does not require Level 5 intensive academic support from the state, is not on probation for violation of school accreditation standards, and when a waiver is in the best interest of students in regard to school bus travel time.

Herschel Cleveland, superintendent of the Western Yell County system, said his district has had a consistently declining enrollment since at least 2014-15, when the average count was 422. It was 342 in 2018-19 and a fraction higher in 2019-20. As of Thursday, the count was 344, Cleveland said.

Cleveland said the rural nature of the Western Yell County district requires three bus routes of between 57, 60 and 61 miles each, one way.

The Strong-Huttig district has an enrollment of just 297 this school year. In response to Education Board questions, Superintendent Kimberly Thomas said she also serves as principal for the single kindergarten-through-12th-grade school.

The Dermott School District enrollment was 341 in the 2018-19 school year and grew to 346 last school year. Superintendent Kristi Gathen-Ridgell said the current count is 367, which -- if it continues -- will result in the Dermott system not having to ask for the annual waiver for the 2021-22 school year.