ASU not rushing its ground attack 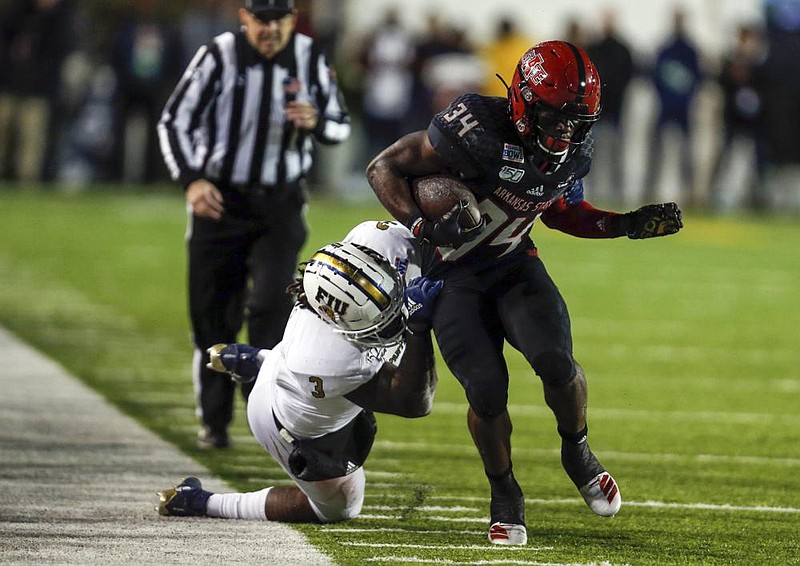 And if the Red Wolves want any shot of doing that and possibly taking home the Sun Belt title in December, their running backs are going to have to stay relatively healthy. Which is why Heckendorf rotated four different backs -- senior Jamal Jones, junior Ryan Graham, sophomore Isaiah Azubuike and freshman Lincoln Pare -- against Memphis and plans to do so again Saturday against Kansas State.

"Just as a group, we went into the game knowing we've got to keep these guys fresh, in our minds, for 14 games. That's the goal," Heckendorf said. "And to do that with the tempo we want to play in and the number of snaps those guys are going to play, we're going to need all those guys. So to keep them rolling in there, keep them fresh, keep fresh legs coming at the defense was the thought process. And I thought they handled it well."

The four running backs combined for 145 yards rushing against the Tigers -- Jones with 64 on 15 carries, Azubuike with 39 on 5, Pare with 33 on 5 and Graham with 9 on 3. Jones started the game in place of typical starter, junior Marcel Murray, who has been out with an unspecified injury.

Murray, a Doak Walker Award watch list nominee this season who rushed for 820 yards last year, "should be back this week sometime," according to Coach Blake Anderson, but he did not specify if Murray will play against Kansas State. Murray has been a key component of ASU's offense, averaging 4.8 yards per carry in 2019 and scoring six touchdowns. His presence in Manhattan, Kan., would likely be a huge lift for an ASU offense that stalled out in the second and third quarters against Memphis.

Still, the Red Wolves are confident the four who played at Memphis can get the job done again this weekend if Murray is unavailable.

"It's the same concepts no matter who's in there. We've got four or five running backs that can get the job done," senior center Jacob Still said. "It's fun blocking for those guys because every running back is not afraid to stick their head in the hole and get those tough yards. And I thought I running backs did a great job all game finding the holes, making the correct cuts, picking up blitzes -- that makes it really fun and I love blocking for those guys."

Kansas State, which finished 76th in rushing defense a year ago allowing 165.5 yards per game , will be one of the more physical teams ASU faces this season. But with four departures on the defensive line, the Red Wolves will have an opportunity to get the ground going against the Wildcats.

Last season, ASU finished 112th in the country and eighth in the Sun Belt in rushing offense with 127.3 yards per game.

Heckendorf hopes that changes in 2020 and after one game, he likes the direction his running backs are headed. And if they want to play 14 games by season's end, it'll need to keep going that way.

"I thought they ran hard," Heckendorf said. "You can always go back and second guess and I think there were some opportunities where we probably could have ran it a little bit more. I was very pleased with the physicality that they ran with. You saw runs where the running back was finishing going forward and to me that was an encouraging sign. That was different than it was a year ago."