Four movies to break out of the vast film vault 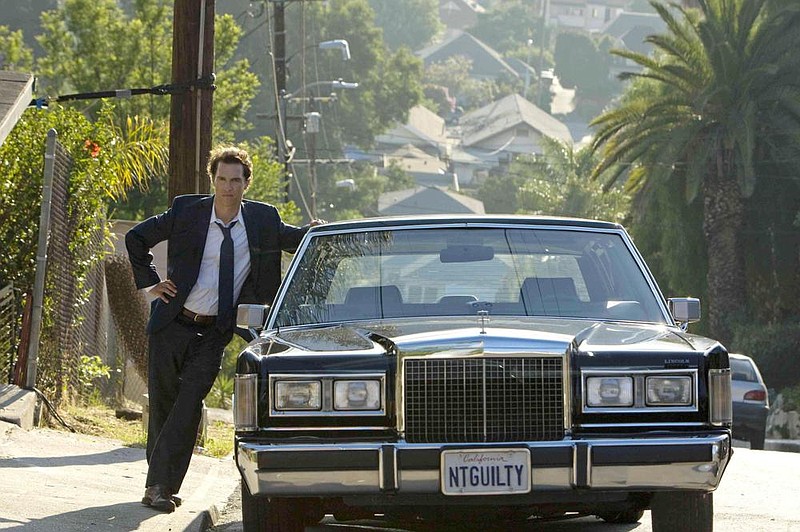 Mick Haller (Matthew McConaughey) poses alongside his mobile office in “The Lincoln Lawyer” (2011).

What modern American director: a) Went to Columbia for college to study "math, physics, and Russian"; b) Directed the feature screen debut of one Robert De Niro in 1965; c) Was present immediately after composer extraordinaire Bernard Herrmann, having just completed recording the score for "Taxi Driver," went back to his hotel and promptly died; d) Directed Orson Welles in his first big studio picture, at the tender age of 32; e) Helped cast "Star Wars"; f) Was best buds with fellow burgeoning auteurs Marty Scorsese, Francis Ford Coppola, George Lucas, and Steven Spielberg after arriving in L.A. in the late '60s; and g) Went on to make no fewer than at least a half-dozen (by my unofficial count) truly extraordinary pictures?

Right, well, as you may have already guessed, the correct answer is Brian De Palma, a filmmakers' sort of filmmaker, not just because of his many homages to past masters, including Eisenstein, and, of course, his beloved Hitchcock, but also because he had his own vision and worked very hard to make the movies he wanted to make, usually at the expense of the castigating suits who funded his pictures.

Noah Baumbach and Jake Paltrow's documentary dispenses with all but the essentials: De Palma sits in a chair and methodically works his way through his rather extraordinary career, from his earliest days, making films as part of a workshop at Sarah Lawrence College, to his biggest hits -- including "Carrie," "Dressed to Kill," "Scarface," "The Untouchables," "Mission: Impossible" -- to his worst box office misses -- "The Fury," "Wise Guys," "The Bonfire of the Vanities," "Mission to Mars," among them. Through it all, he's open and honest as to the work he's proud of, and what he sees as a failure, as well as actors with which he worked (loved De Niro, Tom Cruise, Sissy Spacek; detested Cliff Robertson, found Welles stunningly unprofessional). What's more, representing the most venerated and decorated generation of American filmmakers in history -- one, it must be restated, given vastly more studio carte blanche in the early '70s than at any other point in Hollywood's existence -- he speaks of the problems he sees with modern studio films, finds the use of CGI both sort of thrilling, and ultimately bland (correctly pointing out the directors mainly have to pack off the footage and let the effects team figure out what happens in those many, many cliched battle scenes). But he's also almost eerily optimistic, in a way that gives you a better understanding of a director who has produced a kind of schizophrenic filmography of extreme highs and bitter lows. How a man took on massive disappointment, and heavy studio beef, over and over, and keeps picking himself up and coming back to try again.

2 "Following" (1998): On the eve of the release of his latest $200 million opus, "Tenet," I thought it would be interesting to watch Christopher Nolan's first feature, from 1998, whose meager budget likely wouldn't have covered the craft service danish on his last shoot.

Shot in humble black and white, the film's short running time (69 minutes) and relatively unknown cast might suggest a simpler, less obtuse director, but Nolan takes a basic thriller premise -- a feckless loner, looking for material he might be able to fashion into a novel of some kind, begins tailing random strangers and following them home, only to meet a self-avowed thief, who takes him under his wing -- and still finds ways to murk up the narrative in a manner Nolan watchers will well recognize.

When Bill (Jeremy Theobald), first gets introduced to the burglary game by slick, sly Cobb (Alex Haw), he's bashful, afraid to get caught. But as Cobb, wearing a proper suit that makes him look like a snobby barrister, shows him the ropes (he doesn't go for obvious valuables as much as enjoying the opportunity to mess about in stranger's spaces), it becomes a kind of kink that Bill, without much of an identifiable personality of his own, takes to quickly.

Naturally, things get stickier as Bill gets drawn deeper into this forbidden world until he can't be sure whom he can trust at all. Operating on a shoestring budget, but a million-dollar imagination, Nolan actually involves three separate time sequences and blends them all together, so we're constantly switching from, initial Bill, with longer hair, first meeting Cobb and getting initiated; to late-period Bill, cleaned up, wearing a decent suit, but with bruises and contusions on his face; and mid-period Bill, slicked up and courting a young woman (Lucy Russell), whose flat he and Bill burgled earlier. The narrative splits off in ways that are initially confusing, but eventually coalesce into a coherent -- if highly improbable -- con game between the two men. Inessential, to be sure, but as an early example of what, two decades later, would come to be the kind of saga studios would bankroll with blank checks and complete artistic freedom, a fascinating early turn by a heady director first getting his metaphysical feet wet.

3 "The Lincoln Lawyer" (2011): When we first meet L.A. lawyer Mick Haller (Matthew McConaughey), he's slicked up in a natty suit, makin' deals, and happily rolling in the muck of our legal system, slapping backs, and slipping well-placed big bills in order to get his clients out of trouble: The world's his oyster, always digging for pearls.

By the film's midpoint, however, he's reduced to sitting in a dive bar, sweaty and disheveled, drinking swill and wearing a dingy tank top. In between these points, he's taken on a rich boy client, the sneering, homophobic Louis Roulet (Ryan Phillippe, in a role he was born to play), accused of badly beating a high-end prostitute (Margarita Levieva), and attempted murder, a crime of which he adamantly, and forcefully, denies. Only after taking on this potential cash cow does Mick begin to suspect the actual nature of his client, and the ways this crime pattern almost perfectly conforms to a previous case he bungled, in which an innocent man (Michael Peña), went to San Quentin for life for the killing of another prostitute some years before.

Before long, the suspicious Mick puts his detective Frank Levin (William H. Macy) on it, which meets tragic results. Trapped by the burden of attorney-client privilege, Mick is unable to indict his client, much as he may want to, and instead has to get out of this fix by using the same slippery tricks that have gotten him this far.

We don't ask much of our legal thrillers beyond a twisty plot and a good villain to watch go down, and Brad Furman's methodical thriller doesn't bother offering much more than that. As with Phillippe, McConaughey is also in his sweet spot, playing a lovable rascal, a guy we can root for even though he bends the rules to suit him for a given case. No one else is given much to do, although Shea Whigham gets to have some fun as a jailhouse snitch with a spotty track record. The plot mechanics don't make much sense -- why would a shrewd and seasoned killer put himself in such an obvious bad position, other than to try to show his cunning? -- but the film rolls along dutifully enough until the loose ends are properly braided, and our guy can go back to playing fast and loose with the system with the backing and consent of the grateful movie audience.

4 "Rewind" (2019): A doc begun with home movies about a chubby, badly behaved 9-year-old boy, but in this case, the boy, Sasha Joseph Neulinger, now grown and a filmmaker, goes on to explain the exact nature of his issues.

Raised in a well-to-do suburb of Philadelphia, Sasha's uncle Howard was the cantor at the biggest reform synagogue in the world, in New York City, which gave him a huge amount of clout when it became apparent he had sexually abused both his younger brothers, and, most horribly, his own nephew, over the course of years.

Sasha's other uncle, Larry, was also molesting him. And Larry's son was molesting Sasha's younger sister, Rebecca. His father, a filmmaker, who himself had been abused by both of his older brothers, somehow never figured they would abuse his own children. By the time Sasha was a young adolescent and put in the position of testifying against his uncle in open court, he wanted nothing more than to move on with his life. But in an act of unfathomable bravery, he stood his ground against a withering cross-examination by Howard's top-of-the-line legal team and survived the ordeal.

Sasha speaks candidly with his now-divorced mother about the horror of what her husband's family did to her children under his watch and the things she did and didn't do. More heartbreakingly, he speaks with his father, who had to accept the guilt for what happened, Sasha's story, which made national headlines during his uncle's trial. These conversations have changed the way children are interviewed as sexual abuse survivors.

The old footage of Sasha clearly cracking under the strain of his family's betrayal contrasts poignantly with the strong, centered man he has become.