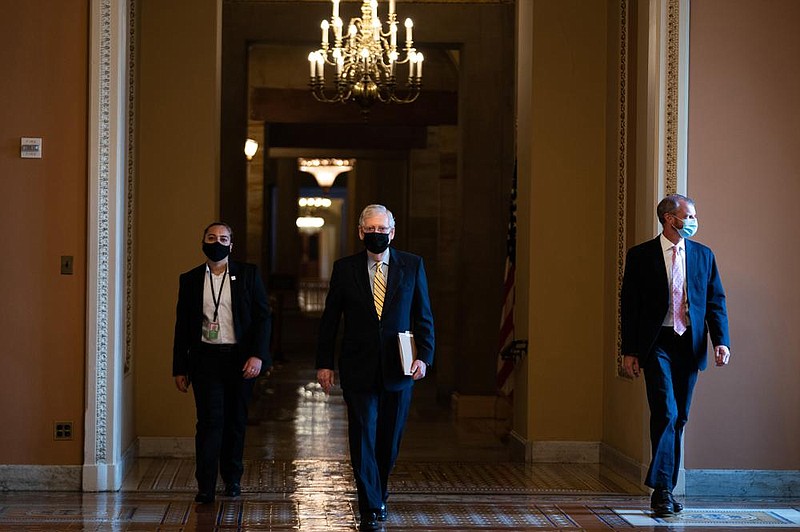 WASHINGTON -- Senate Republicans on Thursday failed to advance their substantially scaled-back stimulus plan amid opposition from Democrats who called the measure inadequate, further darkening the already dim prospects that Congress will enact another economic recovery measure to address the toll of the coronavirus pandemic before November's election.

After months of struggling to overcome internal divisions over the scope of another relief package, Republicans presented a near-united front in support of their latest plan, while Democrats opposed it en masse, denying it the 60 votes it needed to advance.

The result was never in doubt.

"This bill is not going to happen because it is so emaciated, so filled with poison pills; it is designed to fail," Sen. Charles Schumer of New York, the minority leader, said on the Senate floor. "It's insufficient. It's completely inadequate."

Sen. Mitch McConnell of Kentucky, the majority leader, said of the Democrats before the procedural vote, "they can tell American families they care more about politics than helping them."

He added, "senators who want to move forward will vote yes. They will vote to advance this process so they can shape it into a bipartisan product and make a law for the American people."

The 52-47 vote was mostly along party lines, with Democrats uniformly in opposition and one Republican, Sen. Rand Paul of Kentucky, joining them in seeking to block the measure from advancing.

"Instead of delivering a result, our Democratic colleagues chose to block progress on this package while also refusing to negotiate on any realistic solutions that stand a chance of becoming law," he said.

"I'm certain the frustration I feel about this lack of cooperation is shared by Arkansans and others across the country," he said.

"Americans need virus relief, but Democrats just blocked it because it didn't contain their own radical agenda. It's unacceptable to hold the health and livelihood of Americans hostage over an ideological, far-left wishlist," he wrote.

But Democrats, who have refused to accept any proposal less than $2.2 trillion, argued that it did little to address the economic devastation of the pandemic.

It did not include another round of stimulus checks for U.S. taxpayers or aid to state and local governments, omissions that cut down the overall price tag of the legislation in a bid to appease fiscal conservatives. And while it would have revived weekly federal jobless benefits that lapsed at the end of July, it set them at $300 -- half the original amount.

Democrats are pressing to reinstitute the full $600 payment.

For McConnell, wrangling a majority of the Senate behind the legislation constituted a measure of success, after months when Senate Republicans have been hopelessly divided. But next steps -- if any -- toward the kind of bipartisan deal that would be needed to actually pass a bill to provide new benefits to the public were unclear.

Negotiations between congressional Democrats and administration officials have not restarted since collapsing in August.

"It's sort of a dead-end street," said Sen. Pat Roberts, R-Kan. "Very unfortunate, but it is what it is."

The Senate vote comes amid pleas from Federal Reserve officials and others who have said more fiscal assistance is needed to prevent the economy from sliding further this year.

Many of the benefits approved by Congress in the $2 trillion Coronavirus Aid, Relief, and Economic Security (CARES) Act in March have run out. Roughly 29 million Americans received some type of jobless aid last week, new Labor Department data show, and large parts of the economy remain under severe strain.

On a conference call with House Democrats after the new bill failed, Speaker Nancy Pelosi, D-Calif., defended Democrats' negotiating position in response to a question from Rep. Derek Kilmer, D-Wash., head of the centrist New Democrat Coalition. He had expressed frustration about the failure to get a deal and underscored the need to renew expired unemployment benefits.

"We don't want to go home without a bill, but don't be a cheap date," Pelosi told her members, according to a person familiar with her remarks who spoke on condition of anonymity to relay them. "When you are in a negotiation, the last place to get weak knees is at the end."

As the coronavirus pandemic began to grip the U.S. economy in February and March, Congress approved the CARES Act, which authorized a burst of funding to households and businesses in an effort to limit the recession's toll. Some of the law's main planks expired around the end of July, such as small business assistance, $600 weekly enhanced unemployment aid and eviction protections.

House Democrats in May passed a $3.4 trillion bill that would extend some of those measures and approve a number of other initiatives, such as nearly $1 trillion for cities and states, but Republicans and the White House rejected that plan.

The White House didn't begin negotiations with Democrats over what to do next until late July, and those talks faltered as both sides dug in.

The temporary $300-a-week unemployment insurance boost implemented by President Donald Trump is about to end, with no extension in sight.

The Federal Emergency Management Agency said Thursday that it has distributed $30 billion of the $44 billion it had set aside for the benefit. The agency said the fund was enough to cover six weeks of additional jobless aid starting Aug. 1, so unemployed workers won't receive any more after this week.

FEMA emphasized that all eligible recipients will get the $300 boost to cover six weeks, a period that ended Saturday.

Some states had technical obstacles that have delayed the payments, and the federal government is still approving other states' plans to distribute the money.

Eligible workers who have not yet received the $300-a-week supplement or have received less than six weeks' worth, will receive payments for their full share, according to FEMA. After that, the fund will be dry.

The program was designed to leave money to deal with natural disasters, such as the wildfires now sweeping the West, even after the unemployment boost was gone.

Trump created the program after the $600-a-week benefit adopted by Congress expired. The federal government initially did not have an estimate of how long the money would last, but six weeks is in line with what experts expected.

Recipients have said the extra jolt of money from the federal government kept them afloat as the economy cratered amid stay-at-home orders and business closings.

The extra weekly payments came with a significant string attached: It was available only to people receiving at least $100 a week in other unemployment insurance benefits. That cut out hundreds of thousands of low-wage earners, people who had jobs for short periods and gig workers.

One of them is Philip Tuley of Clearlake Oaks, Calif.

His unemployment benefits come to $65 a week, or $260 a month. It was so low because Tuley, 63, had previously taken a year off after spending two decades as an assistant educator at a school district in rural Northern California. He had been substituting recently and was about to return to his district full time when the pandemic struck.

His unemployment benefit was so small because it was based on his average earnings over a two-year period. He said he's been turned away from a local food bank because its shelves were bare.

Tuley said Trump's order is to blame for the predicament he and other low-wage workers are in.

"To have him choose that people who didn't get $100 were excluded, that's just -- forgive me -- it seems sheer evil," Tuley said.

A handful of states kicked in an additional $100 per person to enhance the payment. South Dakota Gov. Kristi Noem, a Republican, was the only governor to decline the additional weekly benefit, according to an Associated Press tally of the states.

Paula Ridenti, 33, who lives in Waltham, Mass., gets $202 a week in regular unemployment benefits since she stopped working at a grocery store in March when her children's schools closed, so the $600 supplement was a big help.

But she's still waiting for her checks with the $300 boost. She should get that money eventually, but in the meantime she has had to figure out how to make do on an income that adds up to just about half her monthly $1,600 rent.

"I feel like the two political parties should get together and put aside their differences for the sake of saving their country," she said.

​​​​​Information for this article was contributed by Emily Cochrane of The New York Times; by Erica Werner, Seung Min Kim and Tony Romm of The Washington Post; by Geoff Mulvihill of The Associated Press; and by Frank E. Lockwood of the Arkansas Democrat-Gazette. 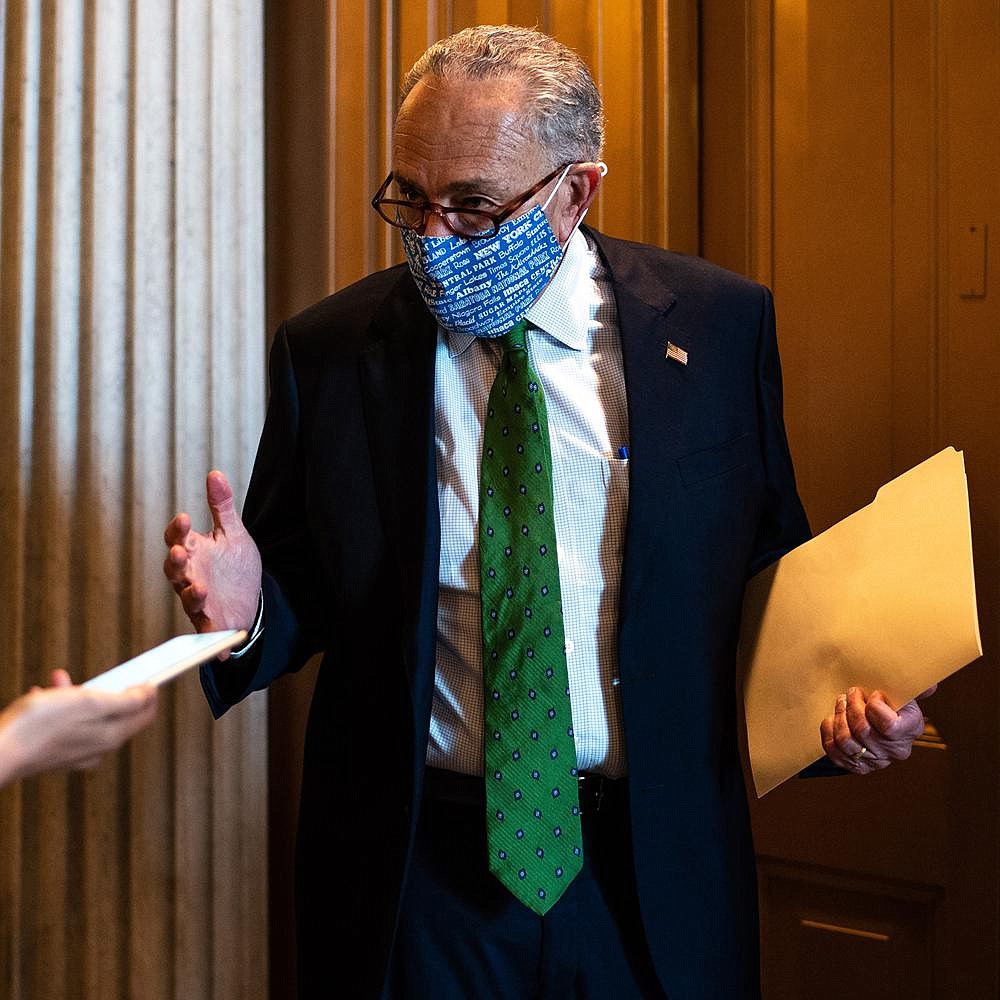 “This bill is not going to happen because it is so emaciated, so filled with poison pills; it is designed to fail,” Senate Minority Leader Charles Schumer said Thursday. “It’s insufficient. It’s completely inadequate.” (The New York Times/Anna Moneymaker)
ADVERTISEMENT