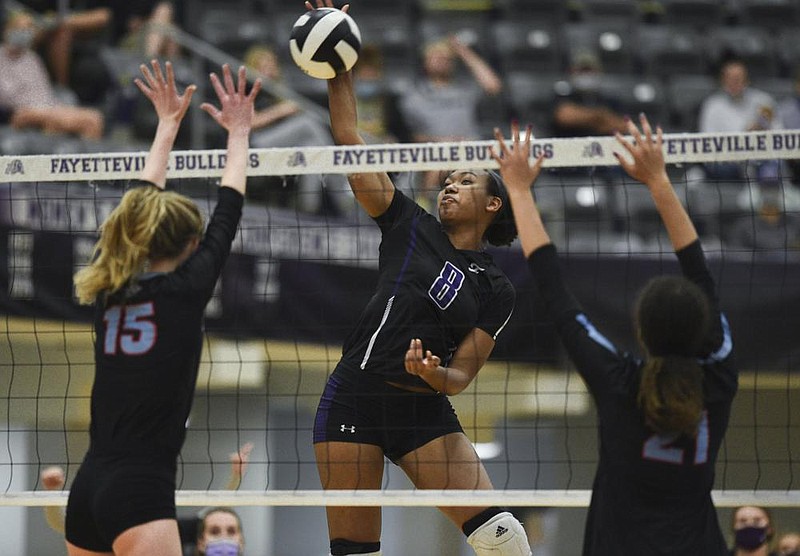 FAYETTEVILLE -- Fort Smith Southside ended Fayetteville's season a year ago in the Class 6A state semifinals, but the Lady Purple Bulldogs exacted a little revenge with a hard-fought 27-25, 27-25, 25-23 win over the Mavericks on Thursday night in Bulldog Arena.

Senior Rosana Hicks hammered a match-high 15 kills and came up big late in all three sets to help Fayetteville improve to 7-0 overall and 3-0 in the 6A-West Conference.

Southside, the two-time 6A state runner-up, had set point in each of the first two sets, but couldn't seal the deal. The Lady Purple'Dogs scored the last three to take the first set and Hicks, a 6-foot-1 senior, went back-to-back to finish off the second set.

[Don't see the video above? Click here to watch: https://www.youtube.com/watch?v=CkRQaFgiwIA]

Southside scored three straight for a 22-22 tie in the third set, but Hicks came through again teaming with 6-3 Sophie Snodgrass for a block and following with a nice deep cross-court shot for the 24-22 lead. Southside answered, but the Lady Purple'Dogs came back to close out the match.

"Rosana was great in the clutch, down the stretch in all three sets she came through for us," Phelan said. "She played like a senior tonight. That was one of the toughest 3-0's. It was a hard-fought battle for sure.

"Regan did great. That's something we want to continue to work on, being able to dig and transition the ball to the middle. She was up and active and came through for us with some big points, too."

"I feel like Fayetteville was the better team tonight," Throneberry said. "They made points happen when it counted the most. They're talented. They really stretched our blockers out."

Trinity Hamilton had eight kills to lead Bentonville to a 25-19, 25-15, 25-12 road victory over Heritage and picked up its first league victory of the season.

Gloria Cranney and Reagan Tunnell added five kills each for the Lady Tigers (4-2, 1-2), while Bella Engledow had four kills and four of Bentonville's 13 aces. Jamie Myrick contributed a team-high 15 digs.

Reagan Ptacek had 10 kills for West (1-4, 1-2), followed by Trinity Luckett with 9 and Ally McCasland with 7. Ana Bastos had a pair of aces for the Lady Wolverines.

Emerson Traweek put up a double-double with 11 kills and 11 digs for the Lady Saints (7-0, 5-0). Avery Porter added eight kills and 10 digs, while Ryli Russ finished with a team-high 17 digs. Setters Katelyn Simpson and Kat Muphree also combined for 35 assists.