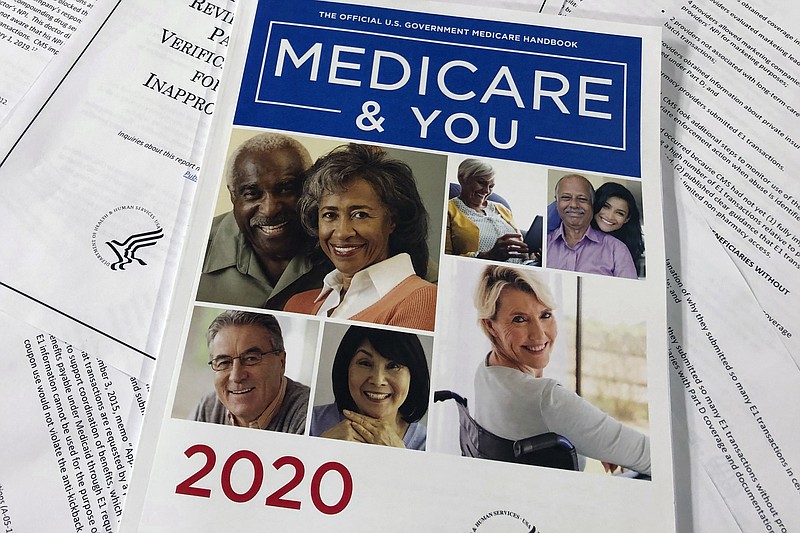 The Official U.S. Government Medicare Handbook for 2020 is shown over pages of a report from the Office of the Inspector General at the Department of Health and Human Services in this Feb. 13, 2020, file photo. (AP Photos/Wayne Partlow, File)

LITTLE ROCK -- Some state lawmakers are questioning a state board's decision to discontinue pharmacy benefit coverage for Medicare-member retirees in the state employees health insurance program and force them to purchase coverage through the Medicare Part D market, starting next year.

The 15-member State and Public School Life and Health Insurance Board adopted the change, among others, during its Aug. 5 meeting to eliminate a projected $49.8 million net loss for the state plan. The changes were projected to produce $28.7 million in net income in 2021.

The board also decided to increase health insurance premiums for current and non-Medicare retired state employees by 5% and reduce the wellness credit from $75 to $50 a month, also starting next year.

During a joint meeting of the House and Senate Public Health, Welfare and Labor committees Wednesday, Rep. Justin Boyd, R-Fort Smith, said "it seems to me like it was a top-down decision, and we didn't really get any input from the state employees or the retirees as, does this make sense?"

Sen. Missy Irvin, R-Mountain View, said "I am hearing from a ton of retired state employees that are very angry and upset about this decision, how it was made, when it was made without their input and how it affects them."

She asked state officials for the board members' names, email addresses and phone members so she could give them to her constituents.

Irvin said "I am concerned about open enrollment. What are they supposed to do now if they don't have coverage for their pharmacy benefits?"

Amy Fecher, secretary of the state Department of Transformation and Shared Services, said there are 13,845 Medicare-member retirees in the state employees health insurance program who will have to purchase pharmacy benefit coverage through Medicare Part D next year.

"We have entered into a contract for a call center to reach out to [them]," she said.

"We are sending emails. We are sending letters. We are going to make sure that we reach everyone. It will not affect them until Jan. 1, 2021," Fecher said.

Fecher told lawmakers the board normally sets rates for the state employees and public schools employees health insurance plans in June, but "because of covid and various things, we were a little behind."

She said she believes the matter was on the agenda for three meetings before the board's Aug. 5 meeting.

But Shelby McCook, a retiree, told lawmakers most retirees learned about the board's decision to discontinue through pharmacy benefit coverage in an Aug. 9 article in the Arkansas Democrat-Gazette.

"Now you are taking our benefits away from us and not even reducing the premium," she said. "This is going to ruin some families. ... It is going to bankrupt some of the people that were promised ... when they went to work for the state that they would have this."

Irvin said she would like to have a copy of the consultant's report used to make the decision, plus copies of the minutes of the board's meetings on how this decision was made.

"It is not one that I agree with," she said.

Sen. Kim Hammer, R-Benton, said lawmakers are hearing the board's decision will cost some retirees roughly $4,000 to $5,000 a year.

"That is a kick in the britches to the state employees," he said, adding he heard repeatedly employees were told if they "work cheap, we will take care of you in retirement."

"There is nothing [in state law] guaranteeing a defined benefit," he said.

Asked if Medicare-member retired state employees will have to spend $4,000 to $5,000 a year to purchase the Medicare Part D pharmacy coverage, Johnston, the spokesman, said afterward 2021 rates haven't been published at this time.

Retirees will know their rates after the systems open and they are able to upload their prescriptions and make decisions on what plan best fits their needs, she said.

McCook said he has served on the board and served as acting director of the Employee Benefits Division, and "we can't see why they took our pharmacy benefits [and] kept our premium.

"We just feel like they looked for a quick $27 million [in savings], and they were there and took it."

The state's budget administrator, Jake Bleed, said the state will increase its contribution to the insurance plan from $420 to $450 a month per employee.

That increase will cost about $12.4 million a year, Johnston said.

The health insurance plans for state employees and public school employees have done a good job in the past few years of avoiding cost increases and managing costs, he said.

"But we found ourselves in a situation where the '21 year looked very bad and our reserves looked rough, and we had to make some tough decisions," Bleed said.

McCook said "we want them to either give us a raise in our premium and keep our benefits and raise premiums where they have to, or we want a reduction in our premium to reflect" no longer having pharmacy benefit coverage.

Fecher said it would cost the state $48 million to continue the pharmacy benefit coverage for the Medicare-member retired state employees.

She said all other state employees will get a 5% increase in their health insurance premiums.

"The 65-plus[-year-old] retirees that are Medicare-eligible will not get that increase, so not getting the increase was a reduction" in their cost, Fecher said.

"We did run the numbers on if we let them keep the pharmacy benefit and just gave them an increase we would have to increase their health care costs around 40%," she said.

A spokesman for Gov. Asa Hutchinson said Thursday the governor has heard from several retired state employees on the issue.

"This was a difficult decision but one the board made for the solvency and health of our insurance plans. We are all struggling with the increasing cost of healthcare coverage and this is one of the consequences of those rising costs," Hutchinson said in a written statement.