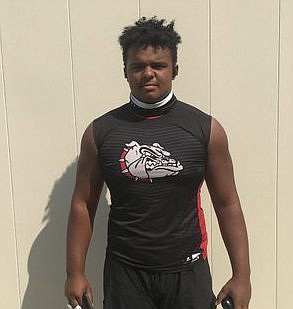 White Hall’s Bobby Bolding has seen a lot of players in his 23 years of being a head coach in high school football, and lineman Landen Meredith is a first for him.

“He’s the first ninth-grader I’ve ever moved up,” Bolding said. “We would’ve liked to left him down, and part of it was necessity and part of it, he wasn't going to get anything out of it. He was just going to demoralize kids at that level.

Meredith, 6-3, 260 pounds, helped the Bulldogs to a 2-0 record going into Thursday’s game against Little Rock Parkview.

“He started on defense the first game and played really well, but we had an offensive lineman get hurt and we had to move him over to offense,” Bolding said.

The Patriots defeated the Bulldogs 41-13, but Parkview coach Brad Bolding — Bobby Bolding’s brother — saw enough of Meredith to know he has a bright future.

“He has really good size, bends really well for a freshman lineman,” Brad Bolding said. “He already has a little nasty in him. The way Bobby develops players, he will be a national player in my opinion.”

A two-sport athlete, Meredith also excels on the hardwood.

“I don’t know if he’s going to play anymore, but he’s that kind of an athlete,” Bobby Bolding said.

Bolding said Meredith is a joy to be around.