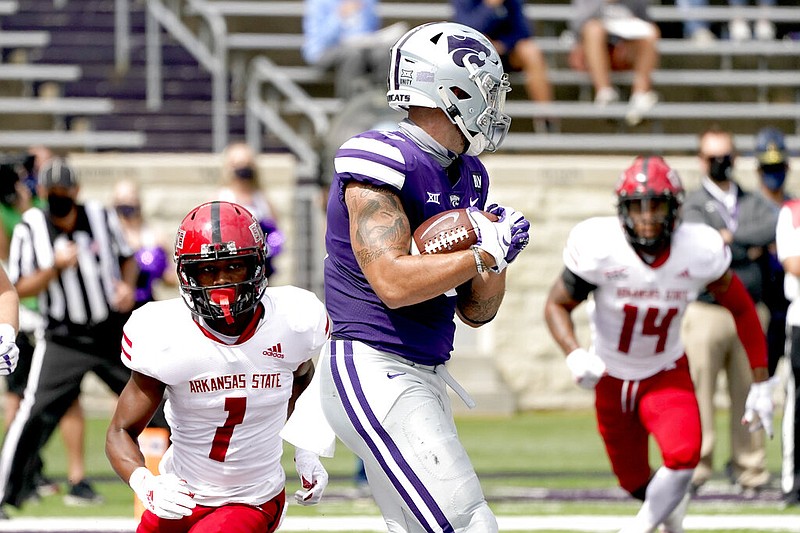 Kansas State tight end Briley Moore (0) catches a pass in the end zone to score a touchdown during the first half of an NCAA college football game against Arkansas State in Manhattan, Kan., on Saturday, Sept. 12, 2020. Pursuing Moore are Red Wolves wide receiver Roshauud Paul (1) and defensive back Antonio Fletcher (14). (AP / Charlie Riedel )

Led by three touchdown catches from Adams Jr., Arkansas State University upset Kansas State 35-31 on Saturday, despite being down 13 players on its depth chart for undisclosed reasons.

The Red Wolves fell behind early after a blocked punt and quick Kansas State touchdown less than two minutes into the game. But a two-yard touchdown grab by Adams Jr. tied the game at 7 at the end of the first quarter.

Kansas State jumped out to a 21-7 lead with 8:41 left in the half. On the following drive, Arkansas State completed a trick play where sophomore quarterback Layne Hatcher threw to sophomore wide receiver Jeff Foreman, who then threw it to junior wide receiver Roshauud Paul for a 48-yard touchdown. ASU had a chance to tie the game late in the half, but a fumble by junior quarterback Logan Bonner inside the Kansas State 10-yard line allowed the Wildcats to take a 21-14 lead into halftime.

Arkansas State tied the game with 2:28 left in third with an eight-yard pass from Hatcher to senior tight end Giles Amos. Then, on the first possession of the fourth quarter, Adams Jr. caught his second touchdown of the day -- this time one-handed -- from Bonner to take a 28-21 lead with 11:49 to play.

Led by Hatcher, the Red Wolves went on a seven-play, 65-yard drive capped by another Adams Jr. touchdown to take a 35-31 lead with only 38 seconds left to play.

Kansas State reached the Red Wolves' 40-yard line before running out of time and sealing Arkansas State's upset victory -- its first win over a Power 5 opponent since 2008.