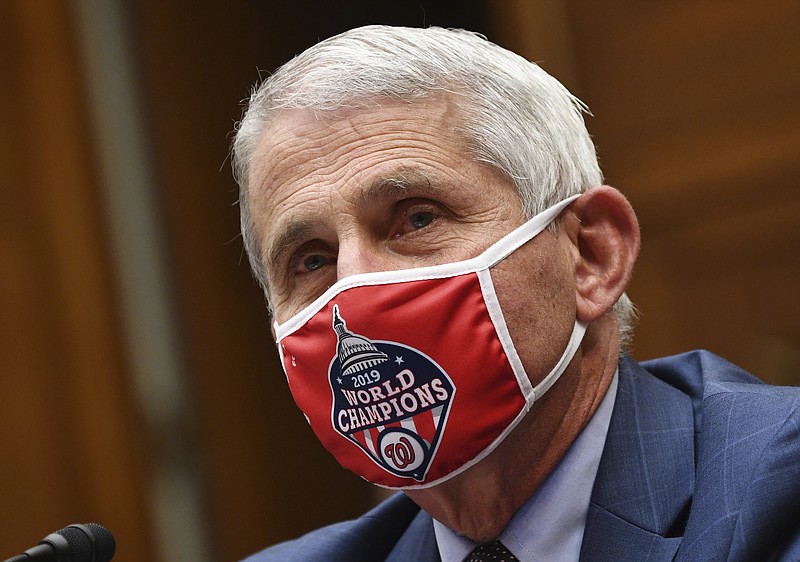 Dr. Anthony Fauci, director of the National Institute for Allergy and Infectious Diseases, testifies during a House Subcommittee hearing on the Coronavirus crisis, Friday, July 31, 2020 on Capitol Hill in Washington. (Kevin Dietsch/Pool via AP)

The number of daily U.S. deaths from the coronavirus is declining again after peaking in early August, but scientists warn that a new bout with the disease this fall could claim more lives. And Dr. Anthony Fauci advised buckling up for a long ride ahead, well into next year.

The arrival of cooler weather and the likelihood of more indoor gatherings will add to the importance of everyday safety precautions, experts say.

"We have to change the way we live until we have a vaccine," said Ali Mokdad, professor of health metrics sciences at the University of Washington in Seattle. In other words: Wear a mask. Stay home. Wash your hands.

The U.S. has seen two distinct peaks in daily deaths. The nation's summertime surge crested at about half the size of the first deadly wave in April.

Deaths first peaked April 24 at an average of 2,240 each day as the disease rampaged through the dense cities of the Northeast. Then over the summer, outbreaks in Texas, California and Florida drove daily deaths to a second peak of 1,138 on Aug. 1.

Some states -- Florida, Georgia, Mississippi, Nevada and California -- suffered more deaths during the summer wave than during their first run-in with the virus in the spring. Others -- Michigan, Pennsylvania, Maryland and Colorado -- definitely saw two spikes in infections but suffered fewer deaths the second time around.

Now about 700 Americans are dying of the virus each day. That's down about 25% from two weeks ago but still not low enough to match the early July low of about 500 daily deaths, according to an Associated Press analysis of data compiled by Johns Hopkins University.

The number of people being treated for covid-19 in hospitals in the summertime hot spots of Florida and Texas has been on a steady downward trend since July.

Worryingly, a dozen states are bucking the national downward trend. Iowa, North Carolina, West Virginia and Kansas are among states still seeing increases in daily deaths, although none is anywhere near the death rates seen in the spring in the Northeast. Back then, the virus caught New York off guard and claimed 1,000 lives per day in that state alone, or five deaths per 100,000 people.

"Often, it's hard to understand the trends when looking at the whole country," said Alison Hill, an infectious-disease researcher at Harvard University. She noted that daily deaths are still rising in some metro areas, including Memphis and the California cities of Sacramento, San Francisco and San Jose.

What's ahead may be worse because the virus is likely to have a seasonal swing similar to other respiratory illnesses, Mokdad agreed.

"In the Northern Hemisphere, it's hard to say we were lucky, but we were lucky that covid-19 came at a time when seasonality was helping us," he said.

The 79-year-old immunologist said he continues to expect a vaccine to be available by the beginning of 2021.

"But by the time you mobilize the distribution of the vaccine and get a majority or more of the population vaccinated and protected, that's likely not going to happen until the end of 2021," Fauci told MSNBC. "If you're talking about getting back to a degree of normality prior to covid, it's going to be well into 2021, maybe even towards the end of 2021."

He also raised concern about reopening indoor dining as the weather cools.

"Being indoors absolutely increases the risk," Fauci said. "I am concerned when I see things starting indoors, and that becomes more compelling when you move into fall and winter season."

In Louisiana, bars in a handful of parishes will be allowed to reopen under looser coronavirus restrictions announced Friday by Gov. John Bel Edwards.

Bars in the state have been closed since July unless they have licenses to operate as restaurants. Under the new guidelines, bars in parishes with less than 5% test positivity for four weeks can open if parish leaders give the OK, Edwards said.

Dr. Alex Billioux, an assistant state health secretary, estimated the criteria currently apply in only five of Louisiana's 64 parishes, which are the equivalent of counties in other states. New Orleans (Orleans Parish) fits the criteria, but Mayor LaToya Cantrell has made clear bars will remain closed for the time being. None of the state's other large cities are in parishes that meet the threshold.

Bars that are allowed to open will be limited to 25% capacity, with a maximum of 50 people. Patrons will have to remain seated. Alcohol sales must cease at 10 p.m. and bars must close at 11. Those younger than 21 will not be allowed in bars. Live music is still prohibited.

Among other statewide Phase 3 restrictions announced Friday: Restaurants, spas, salons, gyms and other businesses can operate at 75% capacity -- up from 50% -- if they can maintain social distancing. Indoor events such as weddings will be limited to 50% of a building's capacity or up to 250 people.

A statewide mask mandate will remain in place. Visitations at nursing homes remain off-limits, but Edwards and Billioux said the state is working on a pilot program that would allow limited outdoor visitation.

The head of the state's judicial system said judges should consult with district attorneys and move forward "as local conditions allow." Melton said courts should follow existing guidance on safety and that advice on remote grand jury proceedings would be issued soon.

Melton also told each county to develop rules on how to resume trials, saying he was likely to authorize trials to resume in October if judges decide that is safe. Counties have to file their plans with the state Administrative Office of Courts before jury trials resume.

Because it takes a month or longer to summon grand jurors and trial jurors, Melton said that means grand juries won't begin meeting until October at the earliest and in-person trials won't resume until November.

"This broad prohibition cannot continue, even if the pandemic continues, because our judicial system, and the criminal justice system in particular, must have some capacity to resolve cases by indictment and trial," Melton wrote in an order filed Thursday.

In Alabama, White House coronavirus response coordinator Dr. Deborah Birx on Friday praised the state's response to the pandemic, but expressed concern about the number of men she saw not wearing masks.

During a stop at the University of Alabama, the site of a recent outbreak, Birx praised the state leadership, university administrators, students and residents for their response to the virus. But as she traveled the state she noted a gender gap in mask wearing. Birx said she purposely drives on visits so she can see what happens in gas stations, coffee shops and as people are "going around their everyday life."

Birx noted that she travels frequently but has remained negative for the virus.

"It is possible to be out and about and protect yourself and protect others. ... It comes down to not only governmental leadership but each of us doing our part and ensuring we are doing it every day," she said.

In Europe, the number of new confirmed coronavirus cases spiked Friday in parts of eastern Europe, with Hungary and the Czech Republic registering all-time daily highs. Hungarian Prime Minister Viktor Orban said his government was drafting a "war plan" to defend against another wave of infection.

Signs of the pandemic's resurgence also were evident in Britain and the Netherlands.

Spain's health minister pushed back against comments by President Donald Trump, who claimed Thursday that the United States had done "much better" than the European Union in fighting the pandemic.

"No one is in a position to give lessons, and with all due respect to the American nation, less so its current president," Salvador Illa told Spanish public broadcaster TVE on Friday. "You have to be very careful when making international comparisons. Each country has its specificities when it comes to providing the data."

Scientists do not yet know how much credit, if any, to give to treatment improvements for the decline in daily U.S. deaths. Doctors now use drugs such as remdesivir and tricks such as flipping patients from their backs to their stomachs.

Others insist better treatments must be making a difference.

"We have many more tools in September of 2020 than we did in March of 2020," said Dr. Amesh Adalja, an infectious-diseases expert at the Johns Hopkins Center for Health Security in Baltimore.

Vigilance is the byword for fall, Mokdad said.

"This is a deadly virus. It's very opportunistic," he said. "It waits for us to make a mistake."

​​​​​Information for this article was contributed by Carla K. Johnson, Nicky Forster, Kevin McGill and staff members of The Associated Press; and by Tim Balk of the Los Angeles Times. 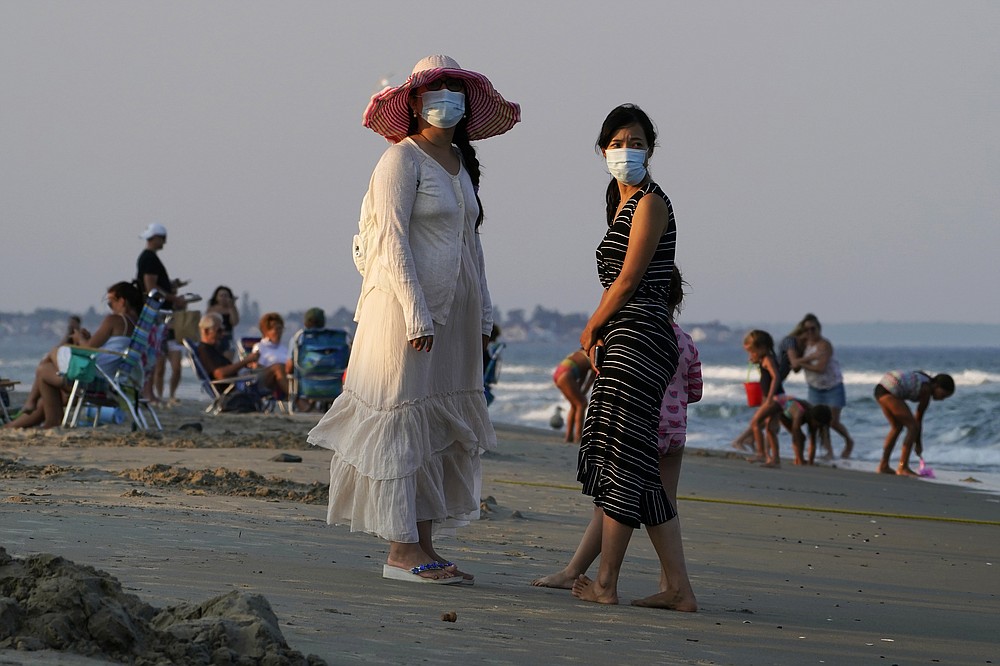 FILE - In this Aug. 11, 2020, file photo, women wear masks to help prevent the spread of coronavirus at the end of a beach day in Ogunquit, Maine. The number of daily U.S. deaths from the coronavirus is declining again after peaking in early August, but scientists are warning that a new bout with the disease this fall could claim more lives. Experts say the arrival of cooler weather and the likelihood of more indoor gatherings will add to the importance of everyday safety precautions, like wearing masks, staying home and washing hands. (AP Photo/Robert F. Bukaty, File) 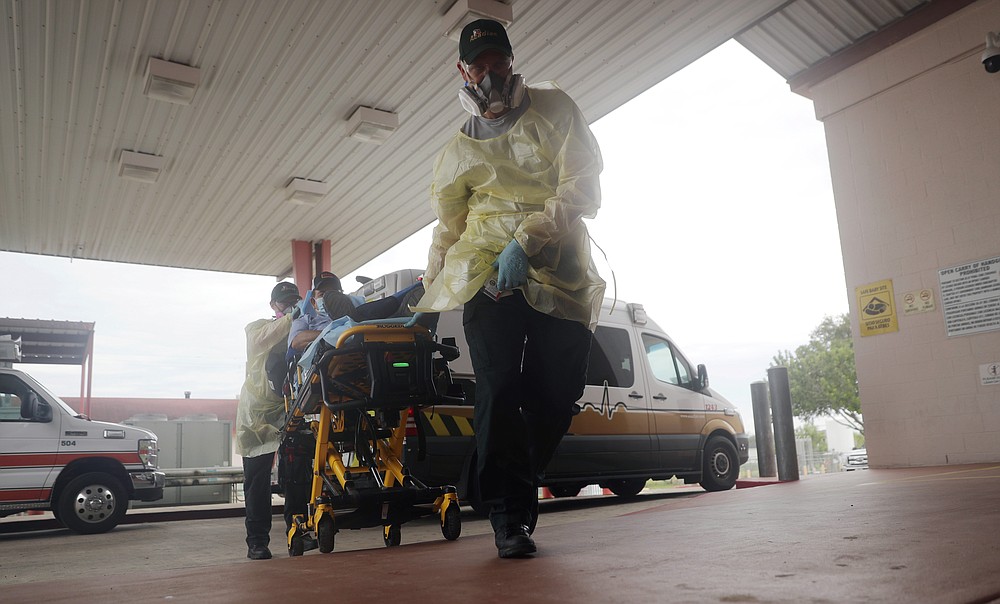 FILE - In this July 28, 2020, file photo, a man arrives at Starr County Memorial Hospital in Rio Grande City, Texas. The number of daily U.S. deaths from the coronavirus is declining again after peaking in early August, but scientists are warning that a new bout with the disease this fall could claim more lives. (AP Photo/Eric Gay, File) 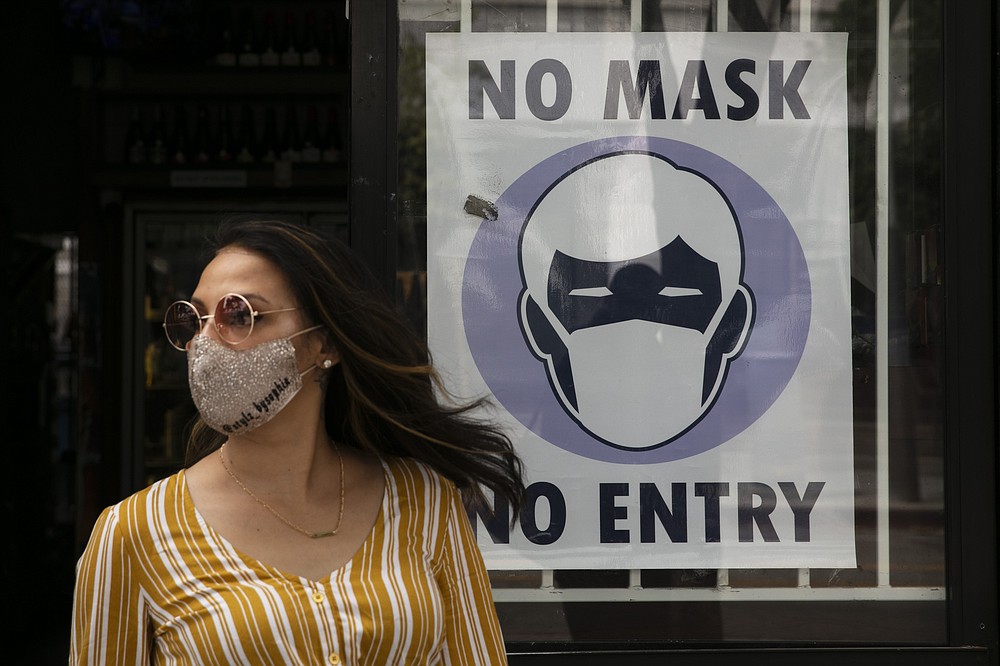 FILE - In this June 23, 2020, file photo, a woman walks out of a liquor store past a sign requesting its customers to wear a mask in Santa Monica, Calif. The number of daily U.S. deaths from the coronavirus is declining again after peaking in early August, but scientists are warning that a new bout with the disease this fall could claim more lives. Experts say the arrival of cooler weather and the likelihood of more indoor gatherings will add to the importance of everyday safety precautions, like wearing masks, staying home and washing hands. (AP Photo/Jae C. Hong, File) 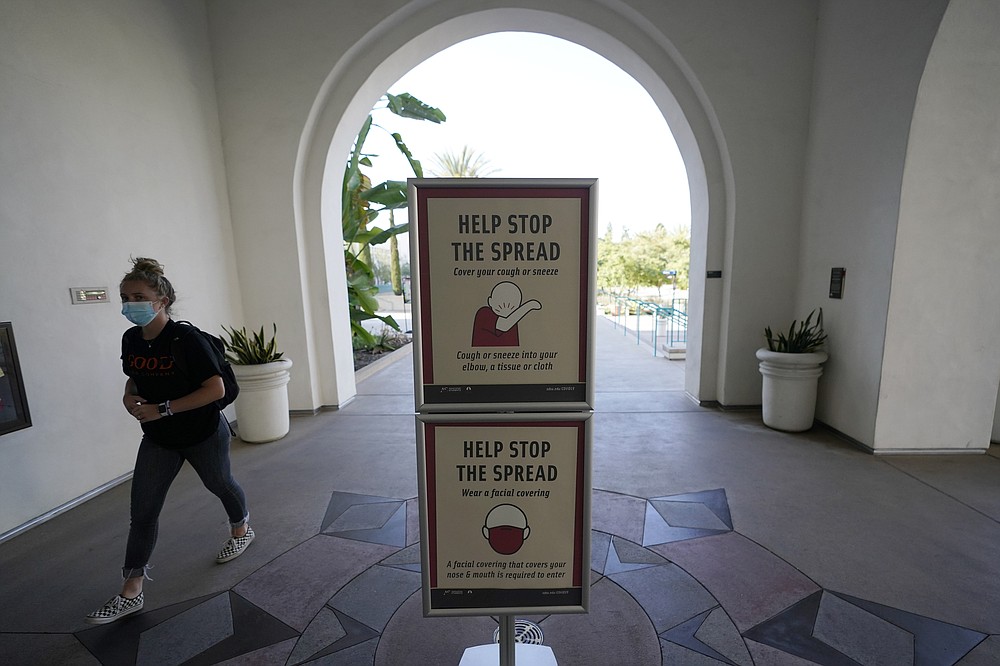 FILE - In this Sept. 2, 2020, file photo, a woman wears a mask as she walks on campus at San Diego State University in San Diego. The number of daily U.S. deaths from the coronavirus is declining again after peaking in early August, but scientists are warning that a new bout with the disease this fall could claim more lives. Experts say the arrival of cooler weather and the likelihood of more indoor gatherings will add to the importance of everyday safety precautions, like wearing masks, staying home and washing hands. (AP Photo/Gregory Bull, File)
ADVERTISEMENT