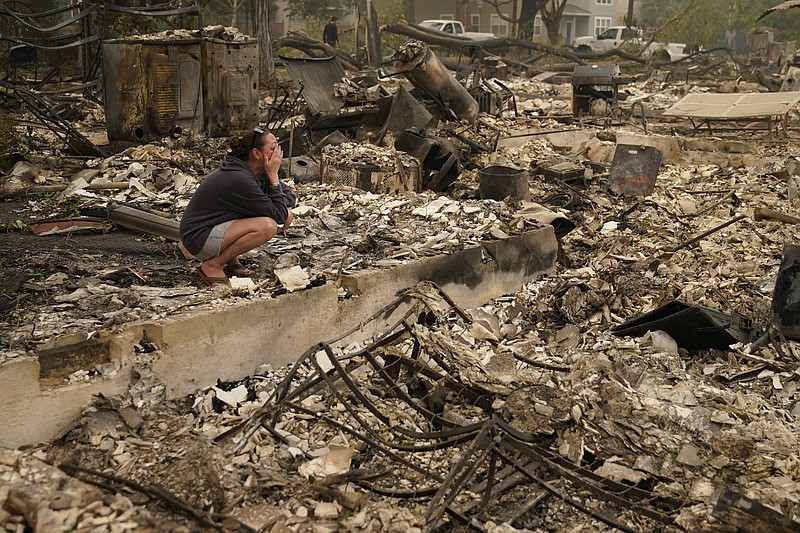 Desiree Pierce cries Friday in the ruins of her home in Talent, Ore., that was destroyed by wildfire. “I just needed to see it, to get some closure,” she said. More photos at arkansasonline.com/912fire/. (AP/John Locher)

SALEM, Ore. -- Hundreds of firefighters battled two large wildfires Friday that threatened to merge near the most populated part of Oregon, including the suburbs of Portland, and the governor said dozens of people are missing in other parts of the state. Numerous wildfires also continued raging in California and Washington state.

Oregon's emergency management director, Andrew Phelps, said officials are "preparing for a mass fatality event" and that thousands of structures have been destroyed.

Gov. Kate Brown said more than 40,000 Oregonians have been evacuated and about 500,000 are in different levels of evacuation zones, having been told to leave or to prepare to do so. She was dialing back on a statement late Thursday issued by the state Office of Emergency Management that said a half-million people had been ordered to evacuate statewide.

Dozens of people are missing in Jackson County in the south and Marion County, where a fire continues to burn east of Salem, Brown said Friday. Authorities also announced that a man had been arrested on two counts of arson in a fire Tuesday in southern Oregon.

[Video not showing up above? Click here to view » https://www.youtube.com/watch?v=hcXoG1ZLZ8A]

However, officials dealing with the catastrophic fires have had to counter social media rumors that the blazes were set by anti-fascist activists, pleading that people verify information before posting it. Despite their efforts, misinformation about the origin of the fires continues to spread on Facebook and Twitter

Several law enforcement agencies in Oregon said they had been flooded with inquiries about rumors that activists were responsible. They say there is no evidence that activists have deliberately set fires.

The Oregon Convention Center in Portland was among the buildings being transformed into shelters for evacuees. Portland, shrouded in smoke, on Friday had the worst air quality of the world's major cities, according to IQAir.

A change in the weather, with winds dropping and shifting direction and humidity rising, greatly helped firefighters struggling to prevent two fires -- one burning southeast of Portland and the other east of Salem, the state capital -- from advancing farther west into more-populated areas.

Winds blowing from the Pacific Ocean also neutralized the fires' advance and even pushed them back, said Stefan Myers of the state's fire information team.

Almost 500 personnel were working on the fires, which were just a few miles apart, with rugged terrain between them that limits boots-on-the-ground efforts to keep them apart, Myers said. If they merge, they could generate such heat that it causes embers to fly thousands of feet into the air, potentially igniting other areas, he said.

The high number of fires occurring simultaneously in the span of just a few days in Oregon was fueled by dry conditions, high temperatures and especially strong, swirling winds.

Oregon officials haven't released an exact death count for the fires, but at least five fatalities have been reported in the state. A 1-year-old boy was killed in a wildfire in Washington, and a Northern California fire that tore through several hamlets in the foothills of the Sierra Nevada this week killed 10 people.

Kim Carbaugh fled from her home in Lyons, Ore., with her husband, two children and two horses Monday.

"When we were driving away and I could see actual fire, the red and orange flames, at the time I didn't feel scared, I had so much adrenaline -- we just had to leave," she said Friday from the livestock stables of the evacuation center at the State Fairgrounds in Salem.

One fire approached Molalla, triggering a mandatory evacuation order for the community of about 9,000 this is 30 miles south of Portland. A police car rolled through the streets with a loudspeaker blaring "evacuate now."

With the two large fires -- called the Beachie Fire and the Riverside Fire -- threatening to merge, some firefighters were told to disengage temporarily Thursday because of the danger. Officials tried to reassure residents who abandoned their homes and law enforcement officials said police patrols would be stepped up to prevent looting.

The change in weather also aided efforts to contain a fire near Lincoln City, on the Oregon Coast.

"Thank God, we got a wind shift. The wind started coming from the west, pushing the fire back towards the east, and that's what kept it within its footprint and kept it from growing," fire spokesperson Ashley Lertora said.

In southern Oregon near the California state line, much of the small town of Phoenix was wiped out. A mobile home park, houses and businesses were burned, leaving twisted remains on charred ground.

Many of the residents were immigrants, with few resources to draw on.

Artemio Guterrez, a single father of four, had been at work at a vineyard nearby when he saw thick smoke spreading through Rogue River Valley. He raced home just in time to snatch his kids from the trailer park. They got out with only the clothes they were wearing.

"I'm going to start all over again. It's not easy but it's not impossible either," said Guterrez, who had just returned from his mother's funeral in Mexico.

John Sykes built his life around his cabin in the dense woods of Northern California. He raised his two children there, expanded and improved it over time and made it resilient to all kinds of disaster -- except fire.

So when the winds started howling Tuesday and the skies became so dark from smoke that he had to turn on his lights at midday, he didn't hesitate to leave it all behind in an instant before any evacuation order. Sykes got his wife and a friend into his car and left with only a change of clothes each.

"All I could do is look in the rearview mirror and see orange sky and a mushroom cloud and that told me it was hot and to keep going," Sykes said Friday. "It was a terrifying feeling."

Berry Creek was largely destroyed in what has become the deadliest fire of 2020, a year that has already shattered California records for the most area burned -- more land than the state of Connecticut -- and recorded the largest fire of all time in the state. Five of the top 10 biggest blazes in state history are still burning and fire season often gets worse in the fall.

In Berry Creek, "There was no fighting this fire," Sykes said. "Those who tried to fight it are probably not here."

At least 10 people were killed, including Josiah Williams, 16, who couldn't escape the flames.

"He was alone, terrified and ran for his life," his mother, Jessica Williams, told CBS13 Sacramento. ""My son was a good, smart, caring young boy that died alone, and it kills me thinking about what he was going through."

"The debate is over around climate change. Just come to the state of California, observe it with your own eyes," he said, citing the hottest August in state history, 14,000 dry lightning strikes in three days, record-breaking temperatures, drought and millions of dead trees.

The immediate good news, he said, was the weather was beginning to cooperate, with winds settling down and the possibility of modest rain.

Bill Connelly, a Butte County supervisor, said about 90% of the homes had burned but most of the 6,000 people in that area got out.

About 20 people were hospitalized with burns; others received broken limbs in the panic to flee, Connelly said. Fire officials have estimated that more than 2,000 homes and other buildings were destroyed.

Under heavy smoke, the search continued Friday for 16 people missing in the rugged mountains 125 miles northeast of San Francisco. 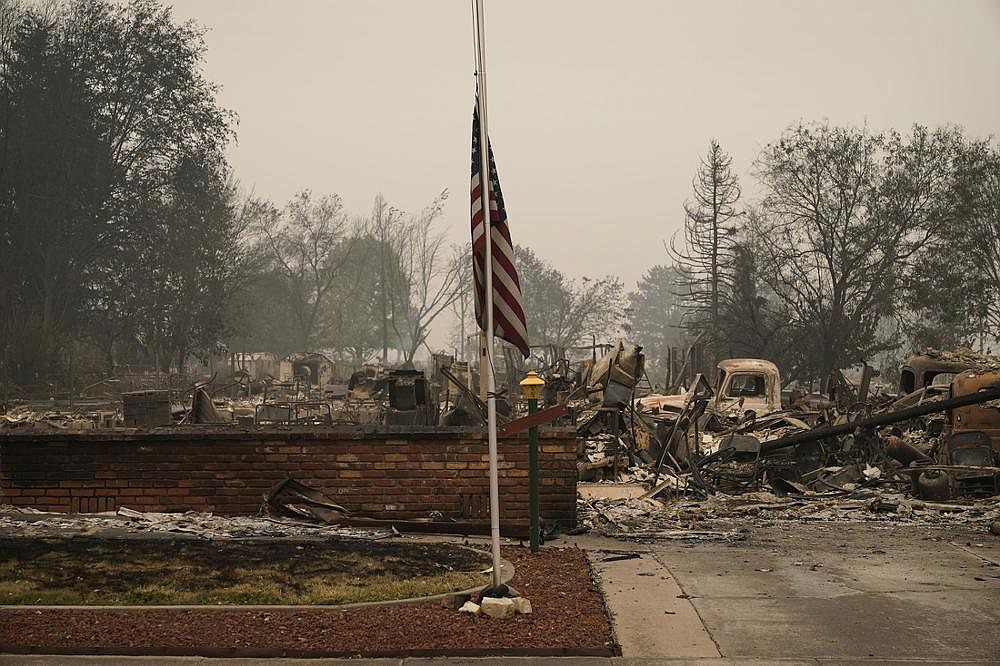 A flag flies Friday over a neighborhood in Phoenix, Ore., that was destroyed along with much of the town when a wind-driven wildfire burned through the area near the California state line. (AP/John Locher) 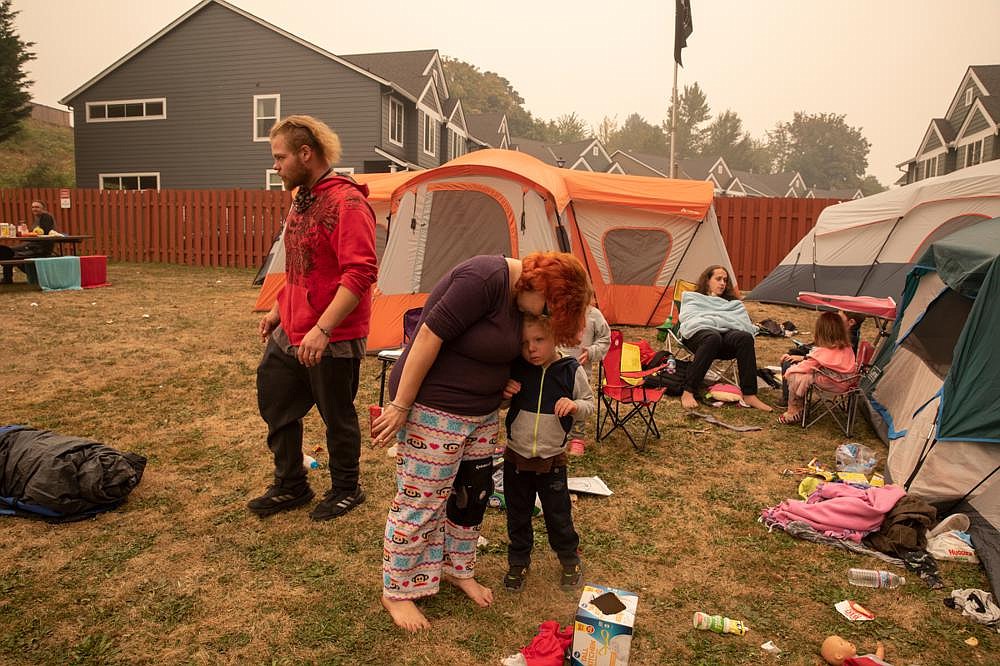 Tiffany Eatherton comforts her 4-year-old son Michael at an evacuation center for people displaced by wildfires at the Milwaukie-Portland Elks Lodge #142 in Oak Grove, Ore. Her husband, Zackary, is at left. (The New York Times/Kristina Barker) 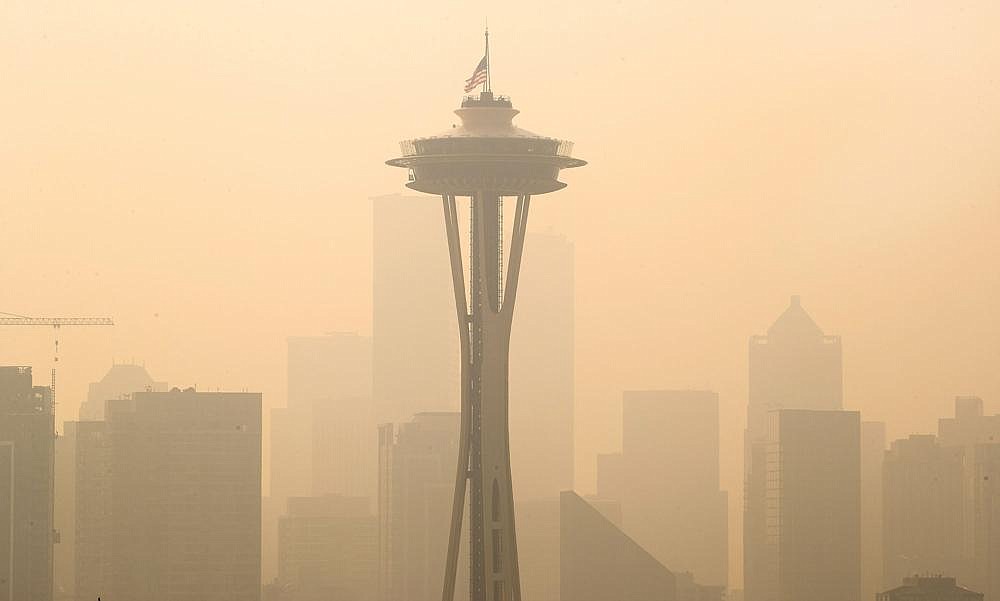 Wildfire-tinted sky (right photo) frames an American flag atop the Space Needle that was lowered to half-staff by the Seattle Fire Department to remember those who lost their lives on Sept. 11, 2001. (AP/The Seattle Times/Mike Siegel) 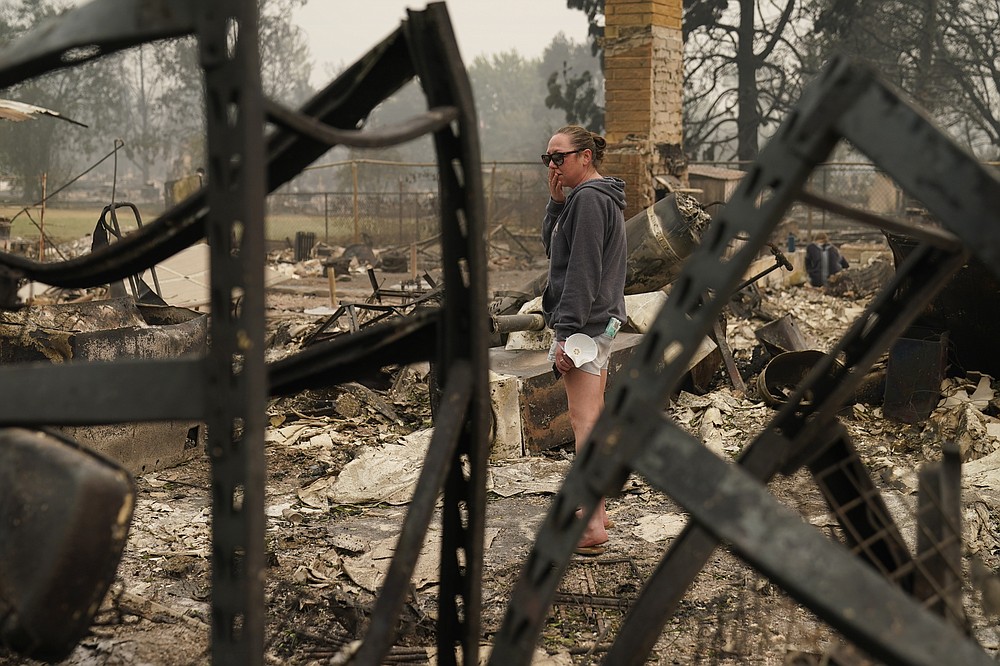 Desiree Pierce reacts as she visits her home destroyed by the Almeda Fire, Friday, Sept. 11, 2020, in Talent, Ore. "I just needed to see it, to get some closure," said Pierce. (AP Photo/John Locher) 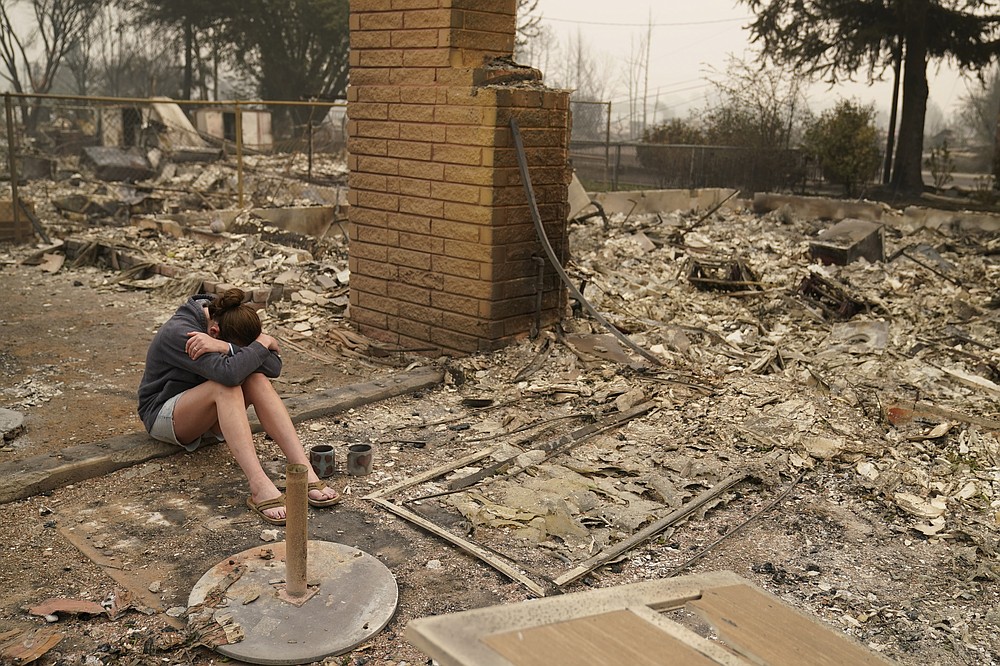 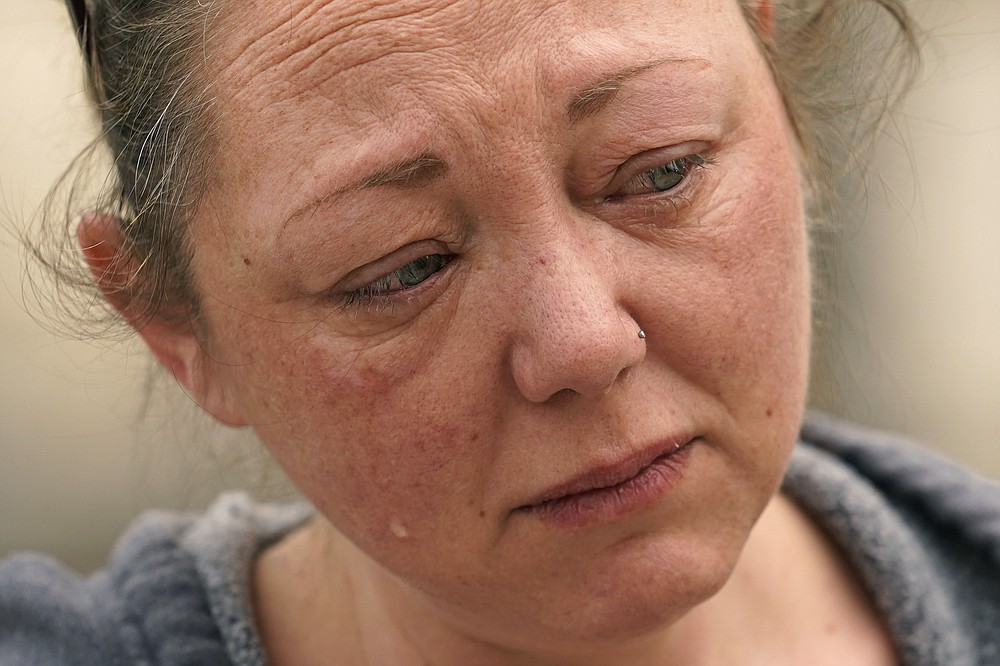 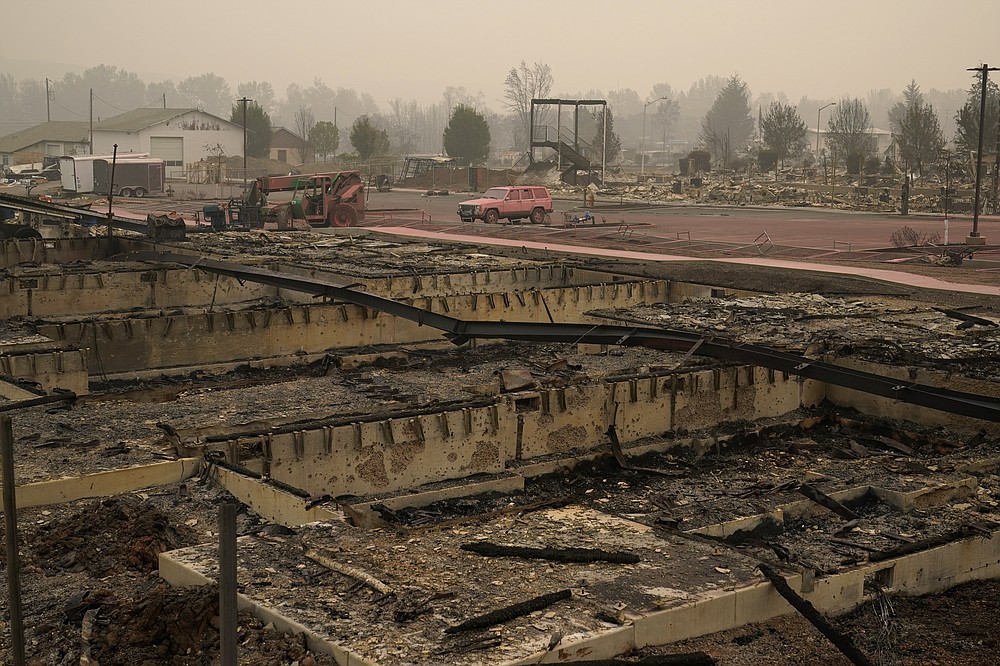 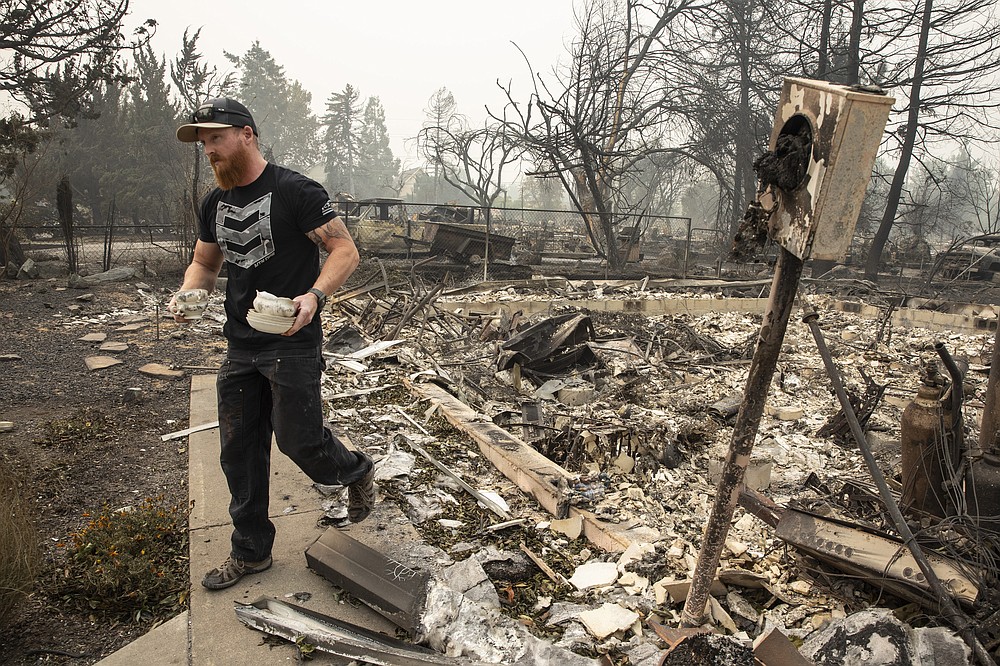 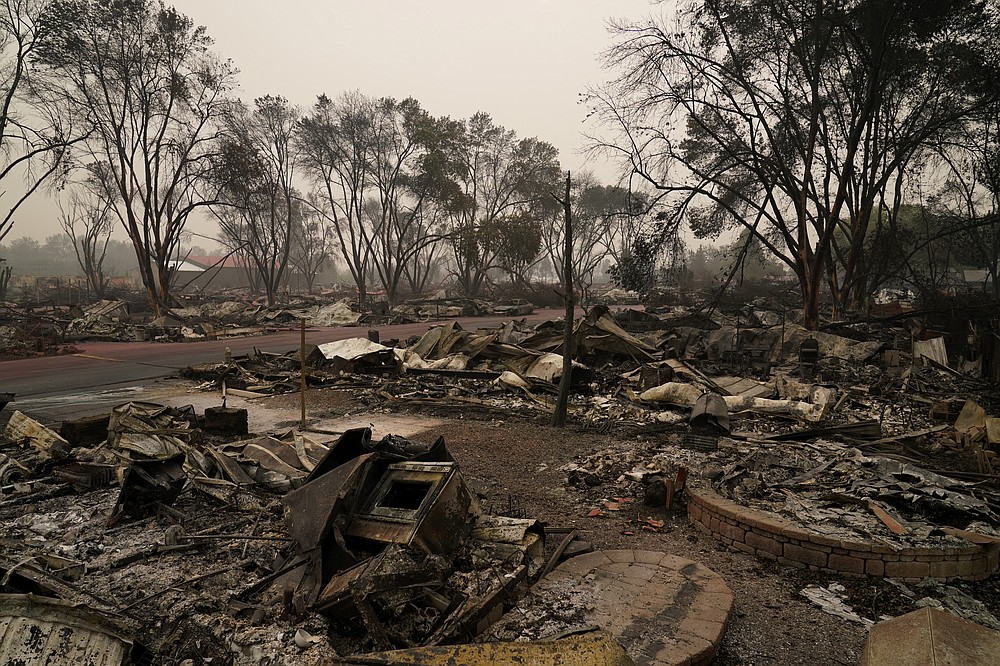 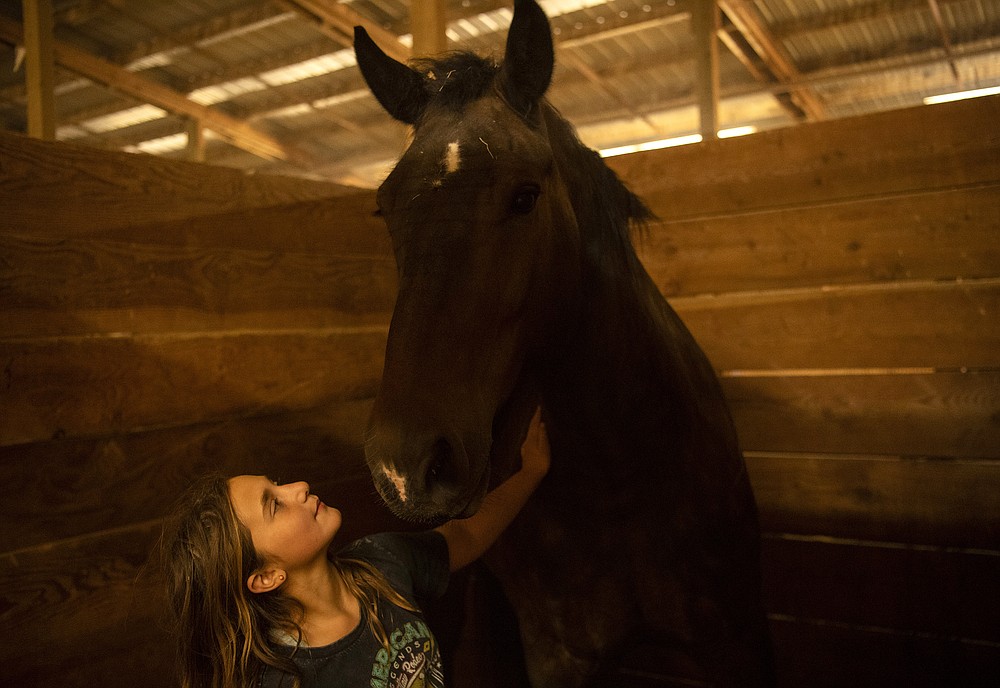 Olivia Nunn of Molalla, Ore., visits with her horse Winston at the Clark County Fairgrounds in Ridgefield, Wash., Friday, Sept. 11, 2020. Her family evacuated Thursday as the fires began to get near her home and the ranch where they board their horses. Nunn said she's been back home once with her family to check on the poultry that they had to leave behind. "Everything was red," she said. "It was freaky." (Alisha Jucevic/The Columbian via AP) 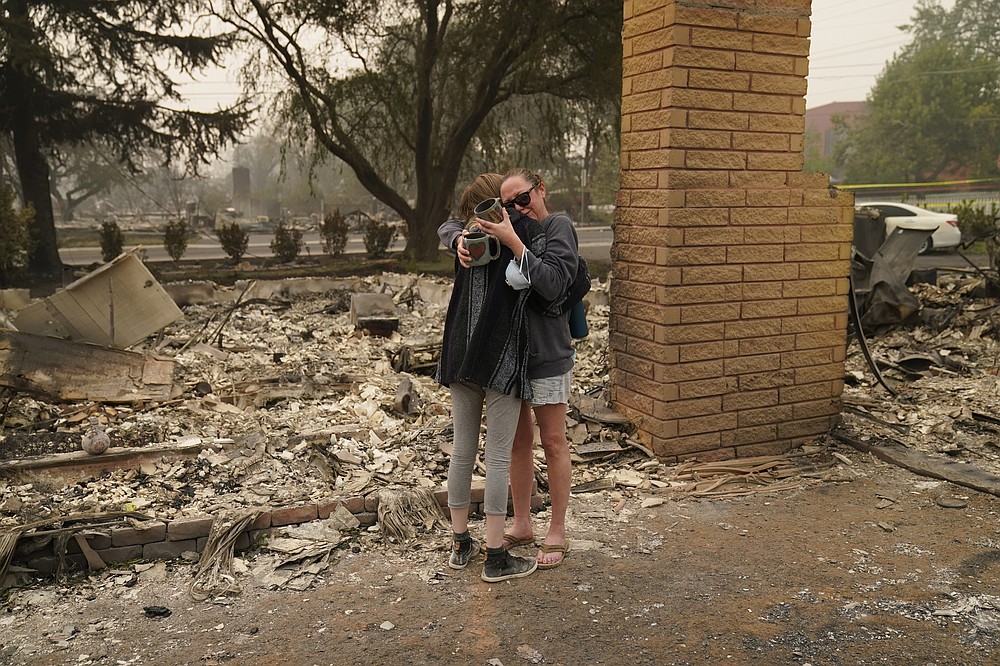