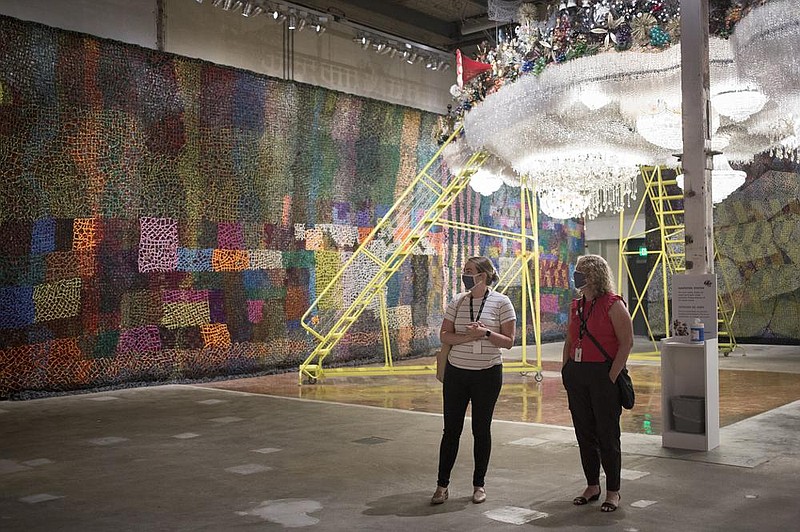 Jessi Mueller (left) and Robin Groesbeck view “Beaded Cliff Wall,” an exhibit piece that is part of “Nick Cave: Until” at the Momentary in Bentonville. The Momentary is presenting the new exhibit, organized by MASS MoCA, through Jan. 3. (NWA Democrat-Gazette/Charlie Kaijo)

BENTONVILLE -- Nick Cave is world-renowned for his "Soundsuits," including the 2010 sculpture at Crystal Bridges Museum of American Art.

Beginning today, visitors to Crystal Bridges' sister space the Momentary will see the themes Cave has been exploring with his "Soundsuits" since the early 1990s amplified and expounded on in his solo exhibition Nick Cave: Until.

The exhibition is Cave's largest and most ambitious project to date and covers the entirety of the arts venue's footprint, spanning more than 24,000-square-feet of gallery space. The immersive installations throughout the space comprise an immense volume of material: 16,000 wind spinners; millions of plastic pony beads; thousands of ceramic birds, fruits, and animals; 13 gilded pigs; more than 10 miles of crystals; 24 chandeliers; one crocodile; and 17 cast-iron lawn jockeys.

The impetus for Cave's "Soundsuits" was his response to the Rodney King beating by police in 1991. Nick Cave: Until addresses issues of race and gender inequity as well as gun violence in America. After Black teenager Michael Brown's killing by a white police officer in Ferguson, Mo., in 2014, Cave began to wonder, "Is there racism in Heaven?" This question became the catalyst for Nick Cave: Until.

The title, as well as one of the major themes, is a play on the phrase "innocent until proven guilty." Or, presented here, "guilty until proven innocent."

"We as a country, we as people, don't necessarily feel that it's in our backyards, and it very much is, and so that also became part of the work," Cave said Thursday during an online preview of the exhibition.

"And yet, as you start to engage in this immersive, kinetic experience, you find that the spinners are not just familiar imagery, but you discover you are exposed to images of guns and bullets and teardrops, mixed in with flowers and hummingbirds," he said. "You're consumed with beauty and opulence, and yet you're burdened with this heaviness. Throughout the exhibition, you will find yourself torn between these two emotions."

The exhibition was co-produced by the Momentary in partnership with Carriageworks in Sydney, Australia, and Massachusetts Museum of Contemporary Art in North Adams, Mass., where it debuted in 2016. Both Cave and Lauren Haynes, director of artist initiatives and curator, contemporary art, at Crystal Bridges and the Momentary, said Thursday the exhibition has been adapted to each space where it has been displayed, but the ideas remain universal.

"It changes the space and changes how you move through," Haynes said in a previous interview.

New architectural and layout elements were designed in the gallery space for the exhibition. Guests will begin to see and hear pieces of the different installations from the moment they enter the venue, Haynes said.

"One of the things that we are really excited to try and experience at the Momentary is a lot of site-specific and site-responsive exhibitions with artists, and I feel like Until is a great first one for us to do.

"That is one of the nice things about how Until is taking over the space, because each of the installations is very much in its own space and has different ways of being, but you're also able to see them and connect them."

One of the major pieces in the exhibition is the "Crystal Cloudscape," offering a visual representation of the heaven Cave was pondering. The massive crystal chandelier hangs overhead. Guests may wander the space below it, but can also venture to the topside on ladders surrounding the piece.

Offering a new perspective -- physically and idealistically -- Cave and Haynes both said they hope the exhibition will create a space to foster conversation and contemplation amid current racial tensions and social justice upheaval.

"There's something about what Nick is offering to people that allows people to put their walls down and be 100% vulnerable and open, and I don't know of many artworks that have that power," Denise Markonish, senior curator and director of exhibitions at Massachusetts Museum of Contemporary Art, said toward the end of the preview.

"As I understand myself more as an artist, I think it's about service," Cave added. "I am an artist with a civic responsibility. And how do I create these opportunities where the work is of service? I was in need for Until. It brings me comfort. It brings me hope. It brings me optimism and reflection."