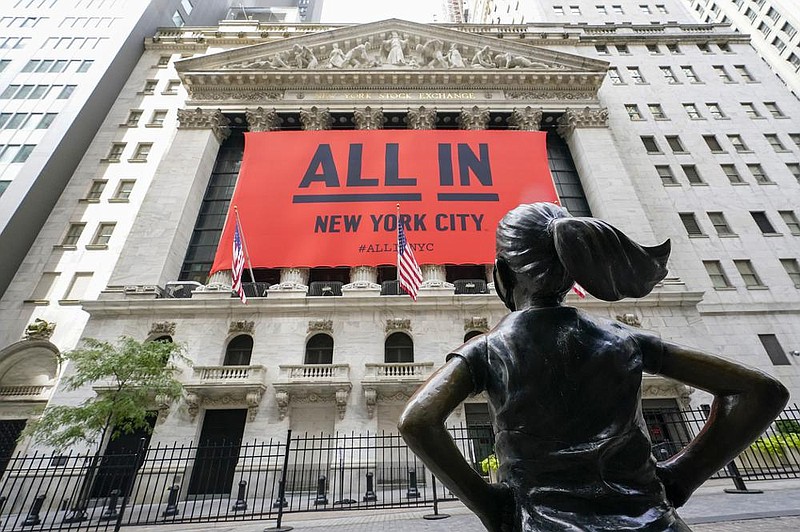 The “Fearless Girl” bronze sculpture in front of the New York Stock Exchange is pictured Thursday as stocks were nearing the end of a tumultuous week. (AP/Mary Altaffer)

The Nasdaq composite, which includes many of the superstar tech stocks that have been the focus of the market's recent selling, lost 66.05, or 0.6%, to 10,853.54 after also flip-flopping between gains and losses. Its 4.1% drop for the week was its worst since market panic was peaking about the coronavirus and stocks hit a bottom in late March.

Analysts expect swings to continue to rattle markets for weeks, if not months, as investors wait for more clarity on several key issues. At the head of the list of uncertainties is what to do with Big Tech stocks, which critics have long said were due for a slide after soaring too high through the summer.

"The technology sell-off continues," said Phil Orlando, chief equity market strategist at Federated Hermes. "We don't think this is anything more than a technical pullback that's cleansing. It's healthy and was anticipated."

Apple, Amazon and others soared through the pandemic as their businesses boomed despite the recession. The coronavirus accelerated a shift to online life that's benefited them, and a pile-on of investors into Big Tech sent their share prices soaring to levels that critics said were overvalued.

Apple had a nearly irrepressible run this summer where it rose in 12 out of 13 weeks. Zoom Video Communications surged above $450 per share earlier this month after starting the year at less than $70.

That all came to an abrupt halt last week. Worries that the stocks had gotten overheated helped send the S&P 500 to its worst three-day run in nearly three months, and the Nasdaq composite slid 10%. Tech stocks recovered a bit on Wednesday, and they seemed to regain their stride Thursday morning, only for an afternoon swoon to batter them again.

On Friday, tech stocks again swung from gains to losses. The fluctuations came even after Oracle reported stronger profit for its latest quarter than analysts expected. After leaping as much as 7.9% in the morning, its stock slipped 0.6%.

Big Tech and the high-growth area of the stock market "just got ahead of itself," said Jason Pride, chief investment officer of private wealth at Glenmede. "It doesn't matter how it got there, it matters that it got there, and now we're kind of deflating that overvaluation a little bit."

After rising as much as 1.5% shortly after trading began, Apple fell back to a loss of 1.3%. It dropped 7.4% over the week, its worst since March. Movements for it and other Big Tech stocks matter more than ever for broad market indexes because their immense size means they can influence the S&P 500 almost by themselves. Five Big Tech companies make up nearly 23% of the index's entire value.

Information for this article was contributed by Yuri Kageyama of The Associated Press.