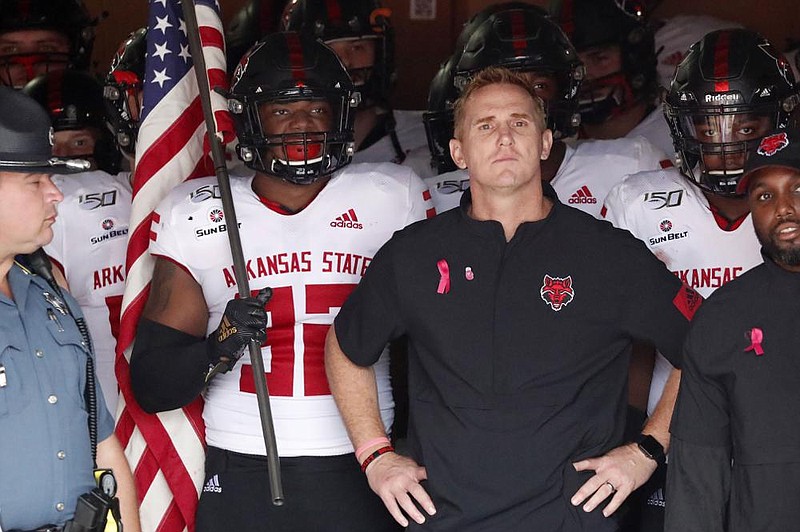 MANHATTAN, Kan. -- Blake Anderson knows where his team's greatest issue lies after just one game: Within itself.

"We're kind of our own worst enemy right now," Anderson said. "We've got to improve. We've got to limit mistakes in a lot of areas. And we've got to grow up quickly."

Growing up quickly won't be easy for the Red Wolves, who are 13-point underdogs today against Kansas State -- their lone Power 5 opponent. And they don't just need to grow up in a single area, either.

It starts with the offense.

"Offensively, we dropped about six, seven balls, two of them inside the 10 that would have given us a chance to score 14 more points than we did," said Anderson, recalling the 37-24 season-opening loss to Memphis last Saturday. "We really struggled on the twist game, which we're going to see twists again this week. A couple critical times where we had big plays and ended up having having holding calls that called plays back."

And then there is the defense.

"Defensively, there's a lot of guys playing out there that haven't played much before, and that's probably where the most glaring issues were," Anderson said. "Miscommunication, misalignment, missed assignments -- we just didn't get give ourselves a chance to be real competitive."

Kansas State is sure to make growing up difficult for ASU. While the Wildcats were picked to finish seventh in the Big 12 this year, beating a Power 5 is not something that comes easy. ASU hasn't beaten a Power 5 team since Texas A&M in 2008, and the Red Wolves are 0-20 since.

And Kansas State, led by second-year Coach Chris Klieman, isn't going to make it any easier.

"They play extremely hard. That's the one thing Coach has them doing," Anderson said. "Last year, first year in, as you watched game-by-game, there is not a game that you turn on and you say, 'Their effort level is bad.' I mean they fly to the ball. And there's a reason he won all those games at North Dakota State before taking the job, and he's instilled that energy level from the beginning."

Arkansas State will have to match Kansas State's intensity from the start if it wants any chance of pulling off the upset. Against Memphis, the Red Wolves did that, jumping out to a 14-7 first-quarter lead.

But the offense stalled in the second and third quarters, leaving ASU too big of a hole to climb out of.

"Those self-inflected wounds are the things we talked about a lot -- things that we did ourselves to take us out drives," offensive coordinator Keith Heckendorf said. "There's simple things we can improve upon that we've got to be better at. And if you eliminate those things and those situations, you don't have that lull. You don't have that where you feel like you're spinning your wheels."

While ASU's offense struggled in spurts against Memphis, its defense struggled the majority of the game, allowing 502 total yards. Kansas State's offense will be different than Memphis, being a run-first team with a dual-threat quarterback in senior Skylar Thompson, who last season totaled 2,315 passing yards, 405 rushing yards and 23 touchdowns -- 12 through the air, 11 on the ground.

"They're going to give you a lot of different personnel packages and formations and things of that you're going to have to really kind of have to make sure your rules are geared out," ASU defensive coordinator David Duggan said. "They want to run the football, play-action pass team -- a little bit like last week, but a little bit more bigger package. They'll be more big up front. We'll have our hands full this week."

Kansas State lost a good amount of its production on both sides of the ball, losing nearly its entire offensive and defensive line.

Challenge aside, Anderson has seen growth in his team this week on and off the practice field. Now, it's a matter of continuing that growth. And that starts today in Manhattan, Kan.

"Our guys, even coming off the Memphis loss," Anderson said, "they took ownership and they're excited about the opportunity."