Fueled by rising scratch-off ticket sales, the Arkansas Scholarship Lottery's revenue increased in August by $8.7 million over the same month a year ago to $49.6 million.

The amount raised for college scholarships last month increased by $2.9 million over what was raised in August 2019 to $7.8 million, the lottery reported this week in its monthly revenue to Gov. Asa Hutchinson and the co-chairwomen of the Legislative Council's lottery oversight subcommittee, Sen. Joyce Elliott, D-Little Rock, and Rep. Laurie Rushing, R-Hot Springs.

Total revenue in August is a record for the month in the lottery's 11 years, while the amount raised for college scholarship is the second-highest amount raised in any August,

The Arkansas Scholarship Lottery has been selling tickets since Sept. 28, 2009. It has helped finance Arkansas Academic Challenge Scholarships for more than 30,000 college students during nine of the previous 10 fiscal years.

Asked about what drove the substantial increase in total revenue, lottery Director Eric Hagler said many factors impact lottery sales, but it's impossible to ignore the effects of the covid-19 pandemic.

"Entertainment options are limited in the current social environment, and we believe sales of lottery game tickets has been viewed as an enjoyable venue for entertainment," he said in a written statement. "We believe that limited options have, indeed, delivered new players to the lottery platform for entertainment."

Hagler, who started as director Aug. 6, said lottery officials also believe compelling and creative marketing has served to continually increase awareness of the wide variety of games offered, as well as educate consumers as to the lottery's mission to provide scholarships to Arkansas students.

August is the second month of fiscal 2021, which started July 1.

During the first two months of fiscal 2021, revenue totaled $99.4 million compared with $82.1 million in the same period in fiscal 2020, the lottery reported.

At the end of the fiscal year, the lottery will transfer its balance of the unclaimed prize reserve fund minus $1 million to college scholarships.

For fiscal 2021, the previous lottery director, Bishop Woosley, projected revenue would total $465.8 million and the amount raised for scholarships would be $78.2 million. Regarding that projection, Woosley said in May, "There is a great deal of uncertainty in the lottery world and the world in general right now."

Woosley attributed the drop in the amount raised for college scholarships in fiscal 2020 to the "terrible draw-game sales we had" as sales for Mega Millions and Powerball jackpot games "were the worst we've ever seen." Draw-game tickets are more profitable for the lottery than scratch-off tickets.

The state Division of Higher Education provided $89.1 million in Academic Challenge Scholarships to 29,640 students in fiscal 2020, said Alisha Lewis, a spokeswoman for the division.

"All of the rosters have been turned in except 2 students," she said Friday in a written statement.

The total Academic Challenge Scholarship distribution peaked at $132.9 million in fiscal 2013, going to 33,533 students. That's dropped since then, largely because of the Legislature cutting the amount of the initial scholarships three times in 11 years. These scholarships also are financed by $20 million a year in state general revenue.

The 2017 Legislature created the Workforce Challenge Scholarship program to use excess lottery proceeds to provide up to $800 a year for students enrolled in programs that lead them to being qualified for high-demand occupations. The Division of Higher Education paid out $278,038 in these scholarships to 1,729 students in fiscal 2020, Lewis said.

The 2019 Legislature created the lottery-financed Concurrent Challenge Scholarship program. High school juniors and seniors are eligible to receive the scholarships for a semester or an academic year in which they are enrolled in an endorsed concurrent enrollment course or certificate program under certain conditions. In fiscal 2020, the Division of Higher Education paid out $1.4 million of these scholarships to 2,923 students, Lewis said.

Asked if there are any major changes under consideration in terms of games, such as adding keno and an iLottery digital channel, Hagler said that perhaps one of the few upsides created by the pandemic is the disruptive nature it has caused across all sectors of business.

"It is forcing executive teams in all business sectors to consider strategies and offerings that heretofore were not essential," he said.

Keno is a game that is generally played in public places and "with a limited (partially closed) economy, we do not see this as a 'right now' consideration," Hagler said in a written statement. "Keno is also a game that requires substantial investment and support. We do not want to lose sight of our core strengths, which lie in game tickets."

On the other hand, he said, "The iLottery/digital channel could appear more compelling and would be entirely consistent with the 'touchless' business environment that is currently overtaking the way in which all businesses are operating.

"Lottery games are no different than buying any other consumer item -- convenience is key. With all of that being said, we can only suggest certain paths as we operate through those channels approved by Legislative mandate," Hagler said in his statement.

The Legislature temporarily barred the lottery from deploying keno under a state law, sponsored by Sen. Jim Hickey, R-Texarkana, six years ago. Hickey is in line to be the Senate's president pro tempore from 2021-23. 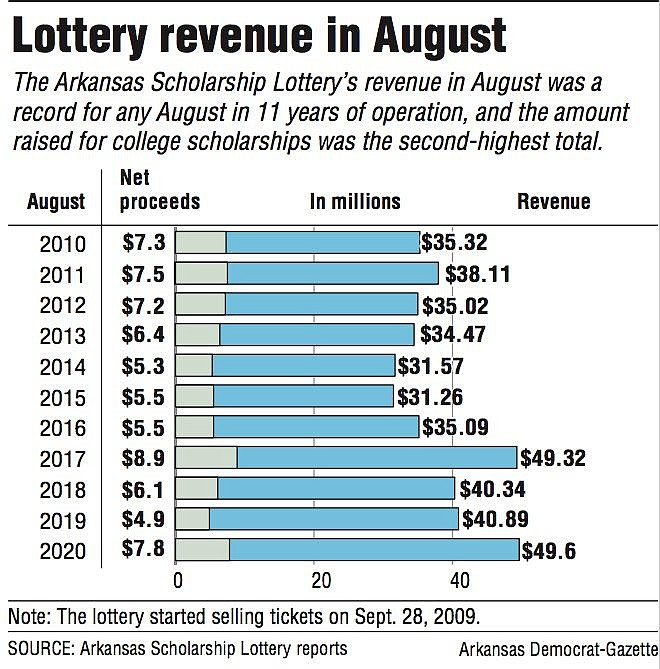