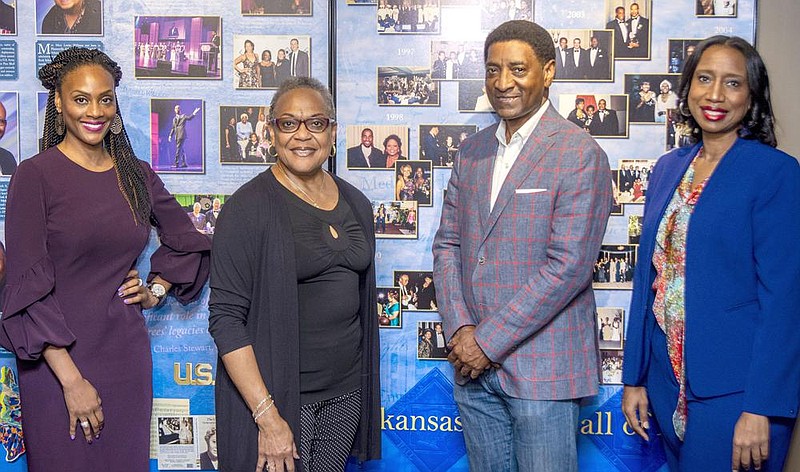 The awarding of covid relief mini-grants, along with social media vignettes of past honorees; a new, interactive display at Mosaic Templars Cultural Center and a rebuilt website have kept members of the Arkansas Black Hall of Fame Foundation committee busy this year despite the absence of a 2020 induction ceremony. These efforts have been headed by Michelle Smith, Paula Patterson, Charles O. Stewart (Hall of Fame chairman) and Taren Robinson. (Arkansas-Democrat-Gazette/Cary Jenkins)

Like so many other fall 2020 fundraisers, the Arkansas Black Hall of Fame Induction Ceremony and Show -- usually held the third or fourth Saturday each October and whose 27th incarnation was slated for this year -- is on hiatus until 2021. That's when, if all goes well, the covid-19 pandemic will be contained and life will return to some semblance of normal.

That doesn't mean that the Black Hall of Fame Foundation committee isn't as busy as ever. And it got especially busy when the pandemic reared its head.

Traditionally, proceeds from induction ceremonies have been used to give grants to underserved communities and the organizations that help these communities. In March, when the committee saw the effects covid-19 was having on Black, Hispanic, Marshallese and other communities of color, it mobilized. It established the Arkansas Black Hall of Fame Covid Relief Initiative -- $50,000 in mini-grants in partnership with the Office of Health Equity at the Arkansas Department of Health.

"We've been awarding grants throughout the state of Arkansas since 2004," says Paula Patterson, grants chairwoman. "We were doing very well ... as far as the money that we would get from the [galas]. We would then turn around and put it into our grants.

"This year because of covid-19, obviously like with everything else, it changed drastically." The foundation advertised the mini-grants through the Black Hall of Fame website, social media and the Health Department, and received 191 grant applications.

"The truth of the matter is, most of these organizations ... and small businesses don't have the wherewithal to apply for that money. And by the time they applied, all of that money was out the door because the banks had prepared their best customers [to get the money]; had alerted them. And on that day that that money was made available, all that customer had to do was to push the button and push 'send' and their [application] went in. And then, you had all these little unsophisticated towns" whose officials didn't realize what they needed to do to get the money; by the time they did, the money was already gone, Stewart says.

"So we got something to them." As covid-19 has continued to rage -- and, according to a new report from the Brookings Institution, is now the third leading cause of death among Blacks -- the foundation is pursuing other private sources of funds to help it give out additional mini-grants.

Overall, including the covid grants, the foundation has given out about $700,000 in grants to communities throughout the state -- and more than $1 million in community investments, Patterson says.

Meanwhile, the committee has ensured those who might suffer from Black Hall of Fame withdrawal symptoms in October have something to look forward to. Some of the more high-profile honorees will be featured during segments on social media. "It's just reminding people of history, and the history of some of our key people who've been inducted," Stewart says.

Instead of running the ceremony from start to finish -- perfecting the lighting and set design, doing stage setups, coordinating performances and music -- Taren Robinson, production chairwoman, is overseeing this effort.

"We're going to take a look back over the years and do a series podcast-style, but there'll be probably some video" of these past honorees and notables in some of the past ceremonies, Robinson says.

"Those will also pretty much cover each of the pillars that we normally induct people in, so it won't be just entertainment," she adds. "You'll get somebody probably from the medical sector, you'll get somebody from science or health, that type of thing. So the same pillars that we use to induct people will be the same focus for each of those videos. And we plan to probably do about six or eight of them, starting at the beginning of October," and culminating about the time the ceremony would normally happen.

Beyond October, those who seek education via the Arkansas Black Hall of Fame can head to Mosaic Templars Cultural Center, where something new has been added to the permanent exhibit there: an interactive screen.

"We've run out of panel space, wall space," Stewart says. "So, we have invested in state-of-the-art touchscreen technology." The large screen will show still photos, slide shows and videos featuring past and future honorees.

"The rooms have filled up with [images from] all the years" that the Black Hall of Fame ceremonies have taken place, says Dr. Michelle R. Smith, displays chairwoman. "We wanted to come into the 21st century because a lot of the museums have interactive pieces. And so we wanted something on the same scale as the standing exhibits, where they could flip through the years, and get more of a feel for each inductee because currently, you have the ... snippets on the wall.

"But we have some more detailed information that we wanted to provide on there, in addition to eventually having some videos on there." If an honoree dies (such as baseball great and 2005 inductee Lou Brock did on Sept. 6), they can be highlighted the month they passed. "So we can really make it a living exhibit," Smith says. Adds Stewart, "if someone gets an additional honor," that too, can be highlighted via the interactive exhibit.

The committee right now is getting the interactive exhibit to its liking, working out such issues as safe, sanitary use.

Information upload began last year; the process was completed several weeks ago. All the biographies, from 1993 through 2019, have been uploaded, thanks to Smith and several helpers.

"It'd be great if at some point we could have little snippets and speeches from the inductees," Smith says. "I know Mr. Stewart has them on VHS, so it's going to be a long process of getting those converted over and then getting the clips, but that's the plan."

Stewart says they're now in the process of finding a vendor who will be able to digitize all of the production footage.

Meanwhile, the photo displays now up in the permanent exhibit will remain.

"A lot of people don't want to sit there and look at a screen," Stewart says. "[We] invite them to go into the galleries and just browse, and that will still be there. Just going forward, everything will be on that screen."

Those who haven't visited the foundation's website in a while will be treated to a rebuilt site, compliments of the volunteer efforts of Myron Jackson with The Design Group. Stewart hopes that while they visit, they'll make a donation.

Viewers will also be encouraged to donate during the October spotlights on the past honorees. Meanwhile, letters have been sent out to regular Black Hall of Fame sponsors, asking them to continue to support the mission.

"Many so far have been very generous in supporting our work in spite of the fact that we're not having an event," Stewart says. "And we think that that speaks well to the relationship and the partnership that we have with these sponsors over the years -- that they would continue to do that."

Stewart praises the efforts of all the volunteers in the Arkansas Black Hall of Fame foundation committee, which numbers about 15. He's especially grateful for their hard work this year.

More information can be obtained by calling the Arkansas Black Hall of Fame at (501) 425-5598; or at arblackhalloffame.org. 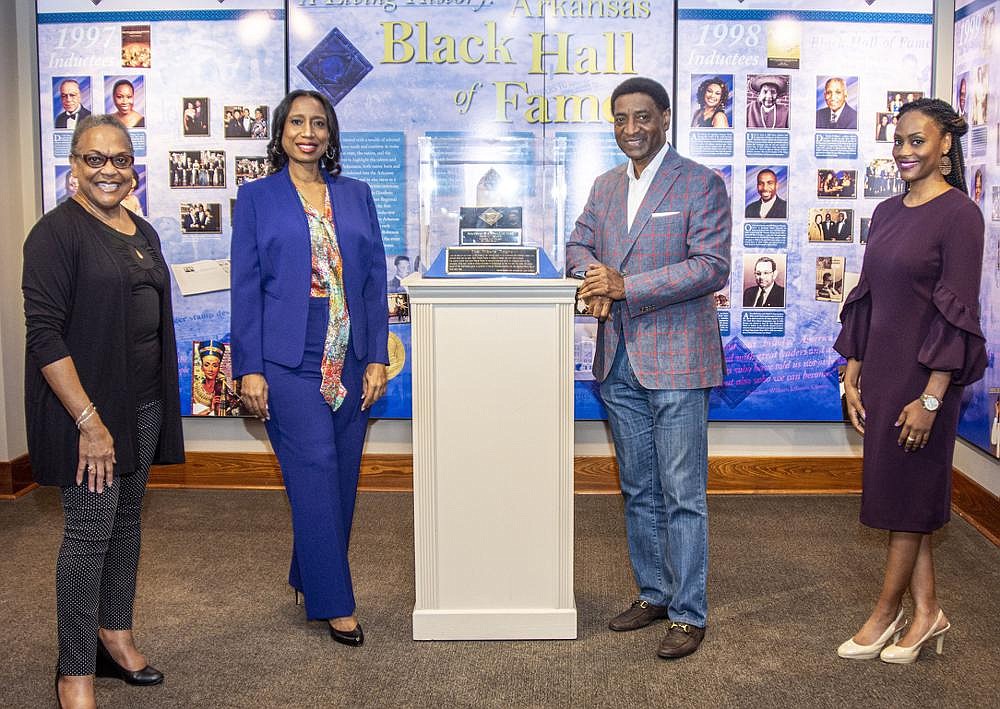 There won’t be an Arkansas Black Hall of Fame induction ceremony in October. But the foundation committee — Paula Patterson, grants chairwoman; Taren Robinson, production chairwoman; Charles O. Stewart, general chairman and Michelle Smith, displays chairwoman — have been busy making sure that the hall of fame, its inductees and their legacy will remain in the hearts and minds of supporters and the community. (Arkansas-Democrat-Gazette/Cary Jenkins)
ADVERTISEMENT