Breeders' Cup to race in front of empty stands 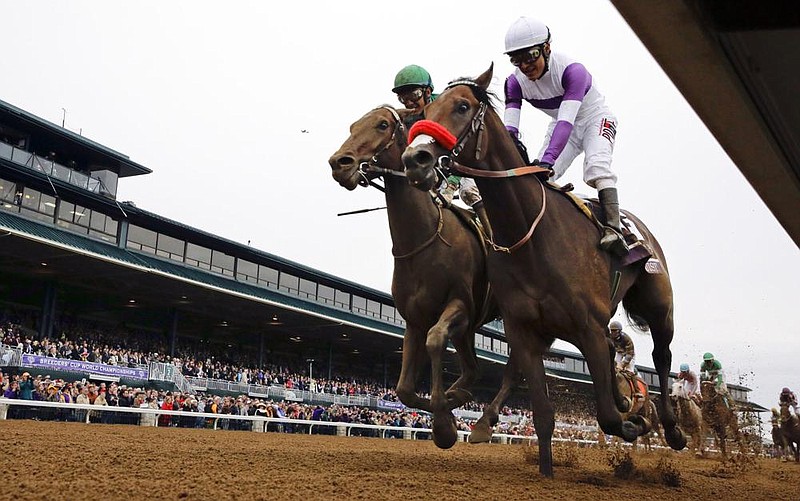 Nyquist (front right) with Mario Gutierrez up finishes ahead of Swipe (left) with Victor Espinoza to win the Breeders’ Cup Juvenile in 2015 at Keeneland race track in Lexington, Ky. The Breeders’ Cup in November will be held without spectators, joining the Triple Crown races in having only essential personnel and participants on hand because of the coronavirus pandemic. (AP/Brynn Anderson)

The Breeders' Cup in November will be held without spectators, joining the Triple Crown races in having only essential personnel and participants on hand because of the coronavirus pandemic.

The world championships are set for Nov. 6-7 at Keeneland in Lexington, Ky.

The decision announced Saturday was made after consultation with Kentucky Gov. Andy Beshear, Keeneland, local and state government and public health officials as well as independent medical experts. Before the pandemic, attendance had been capped at 45,000.

"It was a very difficult decision but we felt obviously it was the right thing to do," Breeders' Cup president and CEO Drew Fleming said by phone from Kentucky. "Safety always comes first with us."

Breeders' Cup officials also announced Keeneland will play host for a third time in 2022, a way for those who had planned to attend this year to be present soon after missing out.

"It felt right that they should be the first ones to have it," Fleming said. "It was very much a unanimous decision from the board."

Keeneland hosted for the first time in 2015. Del Mar in California will host next year.

Coronavirus protocols will be in place for owners, breeders, trainers and jockeys at Keeneland, including covid-19 testing, temperature checks, face masks, social distancing, and hand sanitizing. Access will be restricted to specific areas. Fleming said the specific limits on owners and breeders will be announced later.

Despite the global pandemic, organizers still expect to attract top horses from Europe and elsewhere overseas for the 37th edition.

"We do anticipate we'll have the best horses in the world," said Fleming, who will preside over his first Breeders' Cup as CEO in November.

Fans holding tickets will receive a full refund and will have first access to purchase the same or similar tickets for 2022. Single-day tickets cost $265 each on Friday and $385 each on Saturday. Two-day packages cost $650 each. This year's event was to feature $10.5 million of improvements to the seating areas, including the addition of temporary chalets and lounges.

Fans watching from afar will notice new and enhanced production elements on the live NBC Sports broadcast. Breeders' Cup also plans advanced technologies on its digital platforms, including a second screen to see as many horses as possible and a 360-degree virtual reality camera in the paddock.

"Our fans will have an excellent at-home experience," Fleming said.

While some racetracks have been forced to reduce purses because of the impact of covid-19, the Breeders' Cup will offer $31 million in purses and awards, the same as last year.

However, the $4 million in purse increases announced in March have been postponed to 2021. The Classic purse will remain at $6 million; the Turf at $4 million; and the Dirt Mile at $1 million.

Next year, the Classic purse will rise to $7 million; the Turf will increase to $6 million; and the Dirt Mile will go up to $2 million.

Kentucky Derby winner Authentic could pick up extra cash if he wins the Classic.

This year's reconfigured Triple Crown is being held without spectators. The Belmont Stakes was run on June 20, followed by the Kentucky Derby on Sept. 5. Initially, Churchill Downs officials pushed the Derby back four months hoping fans could attend, then said attendance would be limited before ruling out spectators altogether. The Preakness concludes the Triple Crown on Oct. 3, and the winner earns an automatic berth in the BC Classic for the first time.