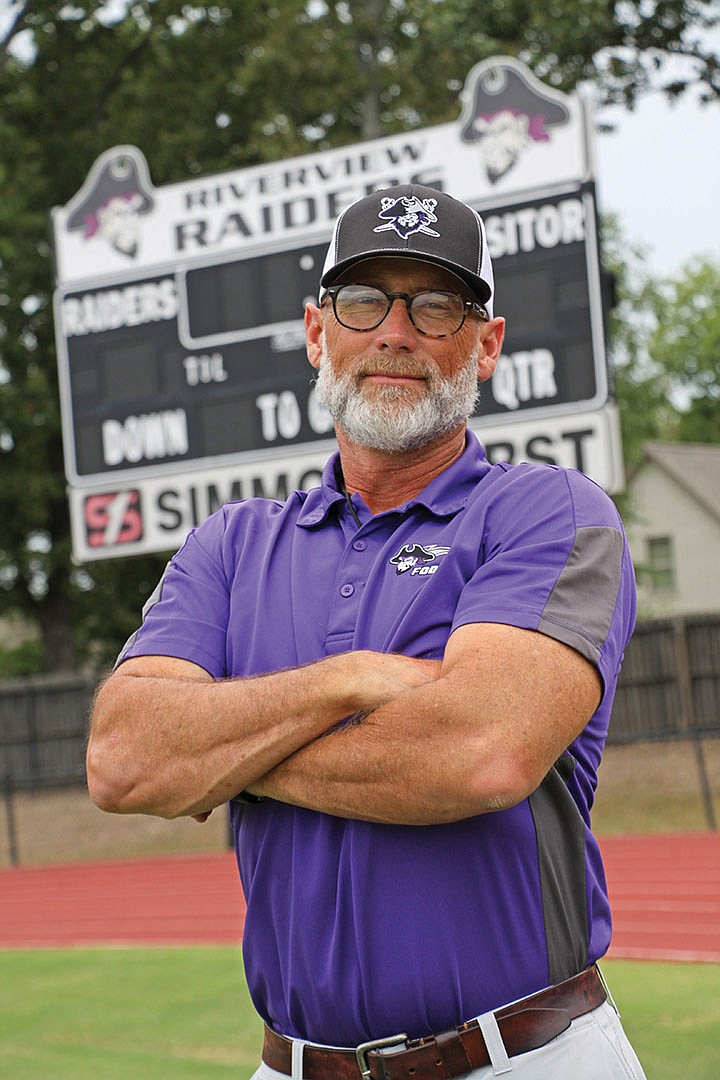 As a kid, Daniel Bristo played football and basketball and ran track. He knew he wanted to stay with the gridiron and be part of the action. But as he got older, and started coaching, he realized there was more than just a love for the game.

“I have a love for kids who are trying to do what I did,” Bristo said. “That was the big thing, being around those kids and having a chance to make a difference.

“I used to think it was all about football, or whatever sport I was coaching, and it does have something to do with the game, but it is mostly all about these people. They grow up to be husbands, wives, moms and dads, and we have a chance to help them along the way — it is just amazing to be a part of it.”

Bristo was recently named the new head football coach for Riverview High School, after serving as an assistant for a year under former head coach Drake Widener, who took an administrative job with the Beebe School District.

“We are lucky to have someone with [Daniel’s] experience,” said Stuart Hill, athletic director for the Riverview School District. “He has won multiple state championships in football and track in Louisiana.

“He has worked with kids for so long, and he has been here a year at our school, so he knows our kids and our demographic. He is excited to work, and the kids love playing for him. We are lucky to have him.”

Hill said the district interviewed several candidates for the position, but the search always came back to Bristo. Hill said Bristo served as the bowling coach and the soccer coach as well, and “the kids just really love playing for him and just feed off his energy.”

“The kids know that he really cares about them,” Hill said. “They feed off every word he says. We also have some new staff members this year who are young and energetic, and they are going to feed off Daniel as well.

“Everything is going to revolve around him and his leadership.”

Bristo was an assistant football coach at Ouachita Christian School in Monroe, Louisiana, for 25 years, including serving as defensive coordinator. He said that during his time there, the team won three state championships.

“I am very defensive-minded, and I know where my weaknesses are,” Bristo said. “As a coach, I take it very personal when someone has the football and wants to score me.

“We have a lot to learn at [Riverview]. We have a lot of idiosyncrasies to learn, but we are going to get there. I don’t expect everything to be smooth, but our kids are picking it up and are energetic. That’s what it’s about — I demand the best out of them.”

Bristo grew up in West Texas and attended Abilene Christian University for a short period of time. He eventually moved to Searcy to play football at Harding University. He said he earned his degree in biology there in 1989.

“I got there, and I played some tight end and defensive end, but I was not God’s gift to football,” Bristo said. “I enjoyed the game, worked hard and was just glad to be a part of the team.

“I played there with a lot of guys who were better than me.”

Daniel Bristo’s wife, Angie Bristo, is from Bald Knob, and their daughter, Anna Caroline Bristo, just graduated from Harding University in May. Daniel said she graduated with a 4.0 grade-point average while running track.

“She takes after her mom,” he said. “I went twice as long, with half the GPA.”

“It is cool being back in this area, where I had so many good memories, and that’s what we are trying to do now,” Daniel Bristo said. “We want to make good memories for these kids.”

“He is a great guy who loves kids and loves the Lord. He wants to make a difference in these kids’ lives,” Fitzhugh said.

“Daniel is a technician, and our track program was extremely successful under him because he pays attention to the details,” Fitzhugh said. “He is always scheming and doesn’t want any stone left unturned. … When he was here, I never had to concern myself with what he was doing because I knew he would take care of it.

“I was able to focus on the offense and other head-coaching duties. [Daniel] likes to have fun with things and always gets creative in the way we work. … He is very creative.”

Fitzhugh said he believes Bristo will do well at Riverview.

“He will demand your best every single day. That’s the kind of energy he brings,” Fitzhugh said. “He has been part of a winning program, and he knows what it takes to be successful.

“I have watched him take kids who couldn’t lift the bar as a freshman and, in a couple of years, turn them into some of the stronger kids in the weight room. He has the ability to motivate them.”

Bristo said his biggest goals are to help the Riverview community grow and be one that people respect.

“He is pushing them to be their best,” Fitzhugh said. “They will be successful on the field, and in 10 to 12 years down the road, when those kids are grown and have families of their own, they will be better people because of the lessons they learned under Bristo.”