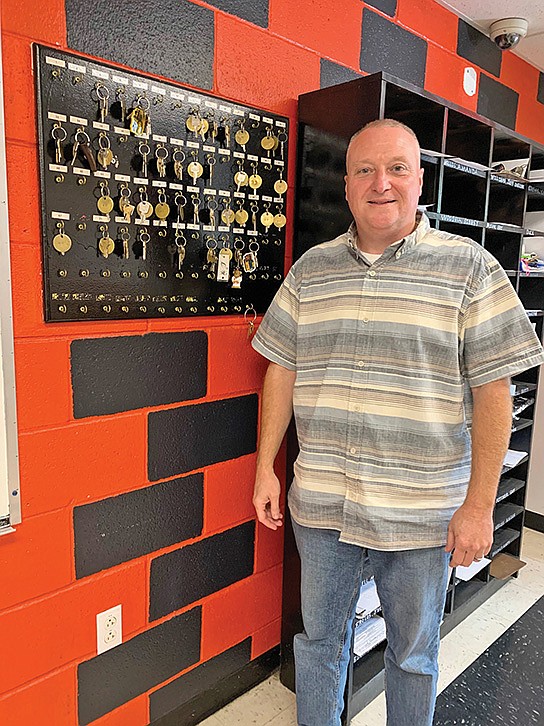 Robbie Cox, who was recently named the Batesville School District’s transportation director, is the district’s Certified Employee of the Year. He has spent 28 of his 29 years in education at Batesville and was most recently the EAST lab teacher at the junior high school before accepting his new position. He has also driven a school bus for the past six years.

Growing up, Robbie Cox loved fishing and wildlife and always thought he wanted a job where he worked outdoors all day. When he graduated from high school, Cox went to college, where he planned to enroll in the forestry program but said it did not take him long to figure out that was not the career path for him.

Instead, he considered education. He said he knew it was a big change, but he had teachers in his life who had made a huge impact on him, and he wanted to do the same.

Cox was recently named the Batesville School District’s Certified Employee of the Year.

With every education course he took, Cox said, he fell in love with teaching. His first year was at Batesville, where, with the exception of one year at Gravette, he has taught the rest of his career.

“Batesville’s my home,” he said, explaining that his family moved to the city with Arkansas Eastman in 1976, when he was in the third grade.

He said he started out his career teaching vocational business and computer science classes.

“I did that for 18 years; then Jeanne Roepcke and I started the EAST program in Batesville in 2010. That was a whole ’nother career change for me,” Cox said.

At that time, he said, the Environmental and Spatial Technologies (EAST) Initiative was growing in popularity, and Debbie Miller, then the school’s curriculum coordinator, approached Cox and asked him to look into starting an EAST program here. He said he toured about 15 schools and liked what he found.

“When I would walk into the classroom, I wouldn’t even talk to the facilitator,” Cox said. “I would talk to the kids because kids will tell you exactly how it is. … I learned the good, the bad and the ugly, and once I talked to the kids, I was sold on it, so I was excited to start that in Batesville …. “The biggest advantage of EAST is it’s 100 percent student-driven.

“Students come up with their own projects; they decide what problems in the community they want to solve. Anytime a student has ownership in their own learning, they will work a whole lot harder than if it’s something you just assign to a student.”

Some of the EAST projects by Batesville students include mapping of graves at local cemeteries and creating child ID kits at the preschool. They’ve also partnered with White River Medical Center, FutureFuel Chemical Co. and countless other local businesses on projects, Cox said.

In 2012, an EAST team from Batesville won the Founders Award, the highest award given to any program, for its design of a safety plan for Believers Community Church.

Last year, a group of EAST students worked with Cleburne County Judge Jerry Holmes, who has been trying to resuscitate a water-garden project at Greers Ferry Dam. Dedicating the dam was the last official act of President John F. Kennedy, who was assassinated two weeks after the dedication in 1963.

Cox said that as Kennedy was flying out of Heber Springs on a helicopter after the dedication, one of his passengers mentioned the water-garden

project, and Kennedy reportedly ordered the pilot back around so he could see the area being discussed.

“He was sold. He wanted to do this, but of course everything changed after he was assassinated,” Cox said. “All these plans were found several years later … and [Holmes] has been trying to revive this.”

The Batesville EAST students created a timeline for the project and an interactive map of the garden, which would consist of several acres near the dam and include walking trails, an amphitheater, a rock-climbing wall and more.

Roepcke said Cox is an advocate for children.

“He always has an open ear and a tender heart for any child who needs him,” she said. “When we started EAST in 2010, we worked as a team. I honestly think I learned more about being a compassionate teacher than I learned about EAST.”

Roepcke joked that she calls Cox “Yoda” because “he is wise — old and wise!”

Sarah Henderson, a business teacher who taught next door to Cox, described him as a great motivator for students.

“He would just get personal with them, tell them funny, quirky stories and make them think — think about it from a different perspective …,” she said. “I never knew a kid that didn’t like Mr. Cox.”

Mason Evans, a sophomore at Batesville High School, had classes from Cox for three years and said Cox is his favorite teacher.

“He’s one of the only teachers I knew I could sit there and have a personal conversation with, not just about school, but about personal things, too,”

Evans was on the EAST broadcasting team, and each Friday, they aired a different broadcast, plus three specials on Veterans Day, just before Christmas and at the end of the school year.

“It wasn’t just one or two people; it was the whole class. Everyone had to work together to make it run smoothly: writers, editors, audio people, directors,” Evans said. “I learned a lot about technology. I was one of the editors and not only learned to edit, but to also use Photoshop and 3-D printers from other EAST classes.”

Now in his 30th year in education, Cox has switched gears and become the transportation director for the Batesville School District.

“It’s a complete and total change of pace,” he said. “This is probably the hardest decision I’ve ever made in my life. I still enjoy being in the classroom and being with kids — that’s what I’m going to miss the most, but I’m one of those people who loves to be challenged.”

Cox said that besides teaching, he has also driven a bus the past six years.

“You can do the same thing on a bus as you can in the classroom. When you think about it, [the driver] is the first person those kids see that day. A bus driver can make all the difference in the world in how that kid performs the rest of the day, because if they are greeted with a smile and those kids know that bus driver cares about them, that sets the stage for the rest of their day,” he said.

When the transportation-director position became available in the district, Cox was interested.

“This is an enormous challenge; it’s a very big job. I knew if I was going to make a change before retiring, it was probably now or never, because these types of positions don’t come open very often.”

He said the biggest downfall will be losing his direct contact with students, estimating that he’s taught more than 4,000 students over the past three decades.

“It’s amazing how many kids I’ve taught over the years who are now teaching in Batesville schools. And many of the kids over the past 10 years or so, I know their parents because I taught their parents …,” Cox said. “I feel like no matter what your position is in the school — whether you’re a bus driver, secretary, cafeteria worker, teacher, principal or superintendent — I think we can all make a difference.”

For Cox, it was business teacher Audrey Seifert and math teacher Kathy West who had major impacts on his life. Seifert, he said, had a way of making “every kid feel so special.”

He recalled that Seifert had lost her voice and wore a microphone. One day, she went to the principal’s office and had a lengthy conversation, all with the microphone on where Cox and his classmates could hear every word.

“She knew immediately what had happened when she came back into the room; we were all dying laughing,” Cox said.

Cox said West also went above and beyond in showing her love for students.

“She would spend her entire lunch period, as well as before and after school, helping kids,” he said.

Up until he had West as a teacher, Cox said, he never even liked math, but she turned him around on that.

Cox also gives credit to his wife, Kristi, the special-programs coordinator for the Batesville School District.

“She’s been in education her whole life, and she fully understands what it takes to help kids,” he said. “She’s my rock, and she fully supports everything I do.”

He also said his parents, Billy and Carolyn Cox, have supported his decisions.

Cox said he feels fortunate he got to teach both of his kids: Hannah, 14, and Hayden, 12.

“That is a very big highlight in my life,” he said. “That was a cool experience as a dad, to be able to teach my own kids.”

Cox said that after 29 years, he is convinced there is nowhere else he would rather live and raise his family than Pioneer Nation.

“I tell people all the time that my closet looks like a Halloween fest — it’s orange and black,” he said with a laugh. “When you’ve been here as long as I have and you put this much into it, you almost bleed orange. Batesville is a great place to live, and I think we have one of the best school districts around.”