The same torpedoes that sunk opening weekend of dove season could make for a fantastic early teal season.

Early teal season begins Tuesday and ends Sept. 30. Our first duck season "early teal" is not as popular as regular duck season, but it can be a lot of fun. It's also an opportunity to give your retrieving dogs a preseason workout.

The daily limit is six teal bluewing, greenwing or cinnamon teal in any combination. The possession limit is 18. Legal shooting hours are sunrise to sunset. Shooting hours in regular duck season begin 30 minutes before sunrise, but shooting hours in teal season are later because other species of ducks are present in Arkansas, and they often fly with teal. Delaying shooting until sunrise greatly reduces the chance of mistakenly shooting an unauthorized species.

Bluewings migrate earlier than other ducks and are the most plentiful species in Arkansas this month. Identifying them in flight is easy. Males and females have bright, powder blue shoulder patches on their wings. In morning light the patches glow like neon. Unfortunately, bluewing teal plumage is in its eclipse phase, so the birds are mottled brown and gray. In winter plumage, a blue wing drake is beautiful, but most Arkansans never get to see it because blue wings have migrated south by November.

According to observers, teal are plentiful in Arkansas right now. Hurricane Laura converted a lot of dove fields to moist soil habitat that is ideal for teal. Soggy fields contain fresh young wheat sprouts and other greenery, but the muddy soil also contains a lot of invertebrates and assorted insects that ducks like to eat. It's best if large pools of standing water are nearby.

Eastern Arkansas and northeast Arkansas seem to have some of the largest concentrations of teal, but most of the birds are on private property. Wildlife management areas and other public land offer limited teal hunting opportunities because they have marginal teal habitat. One notable exception is Frog Bayou Wildlife Management Area near Alma. It is a large moist soil area and is a traditional hot spot for waterfowl. I hunted it in the early 1990s before the Game and Fish Commission acquired it. Some friends leased the best portion, and it hosted some of the best duck hunting I've ever experienced, including early teal. In 1995, I featured it in an article for Arkansas Sportsman magazine titled, "Go West, Young Man, For Ducks!"

The entire Arkansas River Valley is a major duck conduit and often holds large numbers of teal. Some of my best hunts have occurred on Lake Dardanelle, which contains vast amounts of shallow backwaters and side waters that are perfect for teal. Away from the navigation channel, parts of Lake Dardanelle resemble the marshes of south Louisiana. You can hide a boat in the reeds, throw out a few decoys and enjoy some good shooting.

This is also a treacherous environment to operate a boat, especially in the dark. Preseason scouting is essential to find a place to hunt and to chart a path to reach your hunting spot. The water is still warm, so it is comfortable to hunt in shorts. However, the last time I hunted in shorts at Lake Dardanelle, my legs itched terribly for days. Since then, my friends and I hunt in lightweight waders.

You will also need a place to sit. A marsh chair or a camouflage folding chair is fine. I've even sat on a milk crate.

Teal often buzz decoys, but they seldom land in decoys. Most of your shots will be on birds zooming past the outer edges of a decoy spread. A 12-gauge with No. 4 steel shot through a Modified or Improved Cylinder choke is sufficient for most situations.

Snakes are active in warm weather, so there is a heightened risk of snakebite for retrieving dogs. Retrieve birds that fall in thick bank-side cover yourself, and don't overexert dogs that have spent the summer lolling in an air-conditioned house. 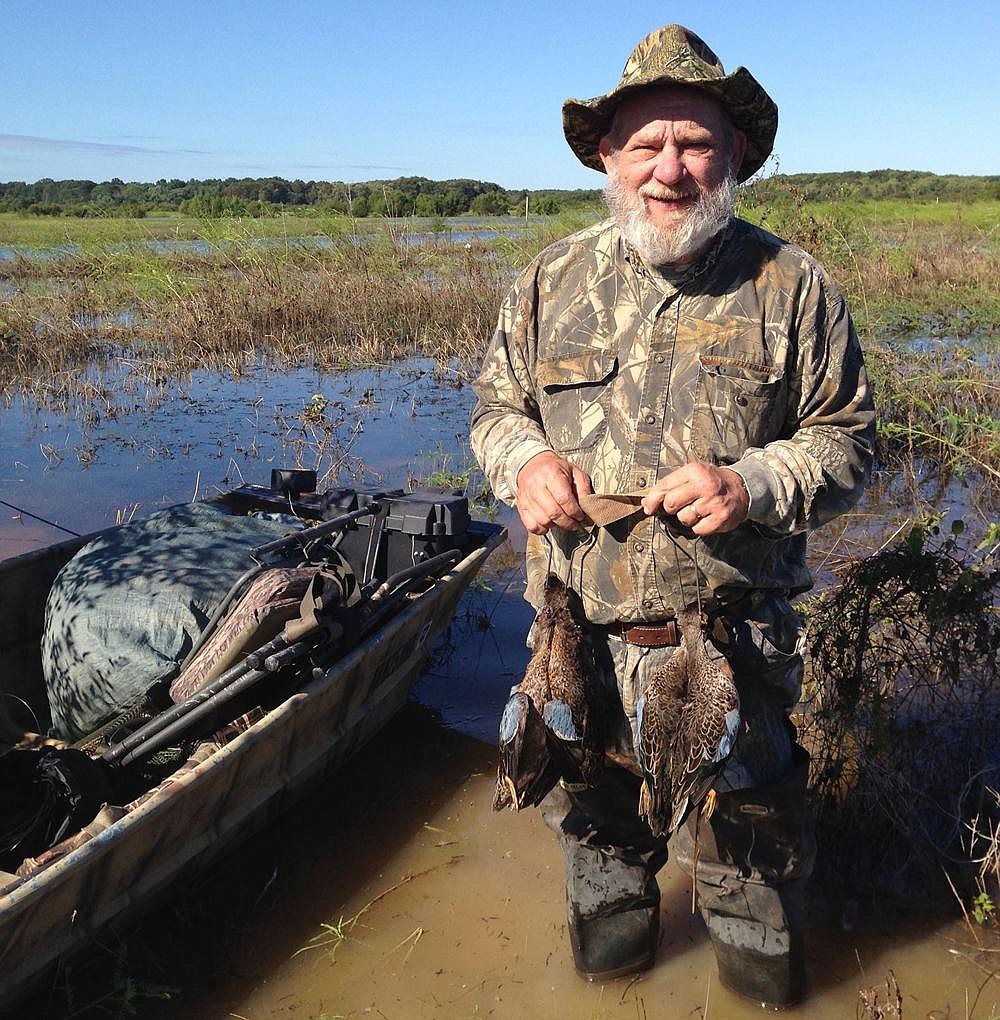