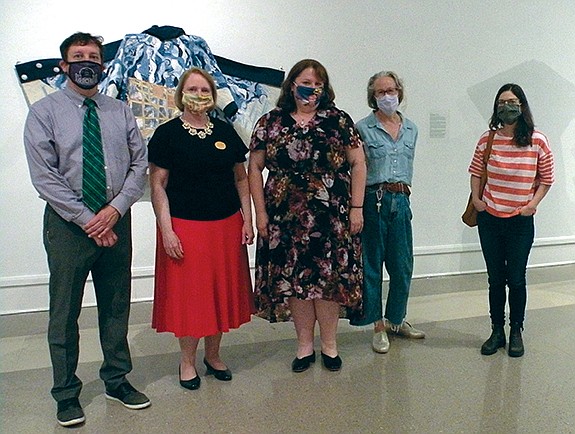 Threads Through Time opened Aug. 26 at the Baum Gallery of Fine Art at the University of Central Arkansas in celebration of the suffrage movement. Among those attending were, from left, Brian Young, director of Baum Gallery and curator of the exhibition; Gayle Seymour, associate dean of the UCA College of Arts, Humanities and Social Sciences and project organizer; Suzanne “Sue” Bennett, curator of visual resources for the Baum Gallery and co-curator of the exhibition; Holly Laws, artist; and Liz Koerner, artist. Two other Arkansas artists not in attendance are Deborah Kuster and Rachel Trusty.

It’s been awhile since members of the public have been allowed to view an art exhibit in person at the Baum Gallery of Fine Art at the University of Central Arkansas in Conway. Even though the coronavirus is still a major threat to the public, the Baum Gallery is now open to patrons, with safety precautions being observed.

Threads Through Time, a fiber arts exhibit featuring works by female artists, including four artists with ties to UCA, opened Aug. 26 to a limited number of viewers. The exhibit is now open to all viewers from 10 a.m. to

7 p.m. Thursday. There is no admission charge. Masks must be worn and social distancing practiced.

The comprehensive, tiered exhibition of modern and contemporary fiber art commemorates the 100th anniversary of the ratification of the 19th Amendment, which made it illegal to discriminate on the basis of sex when voting.

Gayle Seymour, associate dean of the College of Arts, Humanities and Social Sciences and the project organizer, said the public exhibition is “the first in a series of suffrage centennial multidisciplinary arts events and installations intended to inspire conversation and celebrate this landmark moment in American history.

“The suffrage movement was a time in history when women took fiber arts out of the domestic sphere and into the political arena,” Seymour said. “They used the techniques of sewing, applique, weaving and embroidery — what are often referred to as ‘women’s invisible labor’ — to create banners, sashes and clothing as vehicles of protest and, occasionally, victory.

“The Baum Gallery exhibit sets the stage for the UCA events by bringing together examples of fiber arts that link past and present … and show the range of approaches to contemporary fiber arts as expressions of social protest.”

The four local artists who have work in the exhibit include Liz Koerner, Deborah Kuster, Holly Laws and Rachel Trusty.

• Koerner was born in Iowa and now lives in Little Rock. She is a sculptor and fiber artist and is a part-time instructor at UCA,where she teaches art appreciation.

She received a Bachelor of Fine Arts degree from California College of Art in 2009 and a Master of Fine Arts degree in 2019 from San Diego State University. She received a two-year Core Fellowship at Penland School of Crafts in 2014 and, in 2016, a one-year Fine Art/Craft Fellowship at Warren Wilson College. She recently completed an artist-in-residence at the Wood Center at Indiana University of Pennsylvania.

“It is pieced-weaving. … Nine smaller pieces are stitched together,” she said. “Materiality is an important component of these works. Douglas fir is used in the frames to reference its actual use in the building trade. Objects that are typically made from metal or porcelain are carved from basswood, giving them warmth.

“Handmade textiles represent time and labor condensed into fragile renderings of things that are usually durable, such as vinyl flooring. Textiles serve as a link between the body and architecture. As our most primitive bodily protection, we have an instinctual understanding of them as comforting. The softness of cloth echoes the fragility of our own bodies.”

Koerner said the piece of art is part of her recent works, “based on the premise that the home is an extension of the body and that we have subconscious physical and psychological connections to our built environment.”

“I love this exhibit,” Koerner said during the opening reception Aug. 26. “There is a good variety of artwork … really a good range,” she said.

• Kuster, who was born at an Army base, Fort Hood in Killeen, Texas, and grew up in Dallas, is a fiber artist and art educator. She earned a doctorate in art education from the University of North Texas and recently retired from the UCA Department of Art and Design, where she worked with future teachers for 16 years. She and her husband, John, recently moved from Conway to Hot Springs Village.

“I began weaving in the mid-1990s but created my first artwork from cutting, piecing and quilting my hand-woven textiles in 2006,” Kuster said. “This is a time- and labor-intensive process that combines all that I love doing — reflecting, visualizing, designing, assembling, weaving, sewing, embellishing. … My work is diversely influenced by weaving traditions such as the kente cloth by the Ashanti of West Africa and the Mayan textiles of the Americas, along with later American artists Anni Albers and Faith Ringgold.”

Kuster said her three-dimensional vessels in this series “are formed with my pieced handwoven textiles” sewn on “to terracotta clay feet.”

“I began visualizing these vessels from a sentence in Brennan Manning’s book ‘Abba’s Child,’” she said. “After sharing a personal narrative of a friend, Manning described the experience as ‘an earthen vessel with feet of clay laid hold of his belovedness.’ My desire is to create obviously flawed, yet highly treasured, objects.”

Kuster has two pieces on display at the Baum Gallery from her Feet of Clay series — “Hardship” and “Hopeful.”

“I have had work in three international traveling quilt shows since the virus hit, but this is the first time I have had something in an exhibit that actually is open to the public,” Kuster said, smiling.

• Laws was born in Savannah, Georgia, but grew up in Jacksonville, Florida. She lives in Mayflower and is an associate professor of art at UCA, where she teaches 3-D design and Sculpture 1.

“Miniature crinolines, pale and skeletal, levitate in glass domes, in stark contrast with the heaviness of tiny mourning dresses, whose jet-black opacity under glass throws back the viewers’ reflection,” Laws explained about her three pieces shown under domes in the exhibit. “These bodiless objects not only allude to the intensely personal, but also speak to our collective past, when an enormously bloody war altered the social fabric of a nation. As the past bleeds into the present, how do we deal with loss? What are our rituals of mourning and healing? How do we move on? One hundred fifty years later, we must still ask ourselves how we move on, as individuals, Americans and citizens of the world. With the seemingly never-ending cycle of backlash — one against the other — how do we heal and live in peace?”

Laws said she thinks the exhibition “is absolutely gorgeous.”

“Sue and Brian did an amazing job with it,” she said. “It features current work, as well as historic works of textiles.”

• Trusty grew up in Russellville and is a graduate of Russellville High School and UCA, where she received a Bachelor of Arts degree in art education in 2006. She is currently in her third year of the Women, Gender and Sexuality Studies doctorate program at the University of Kansas. Her research at the University of Kansas explores how LGBT+ artists use materials and processes to discuss personal identity.

“I am so proud to be included in Threads in Time at my undergraduate alma mater, the University of Central Arkansas,” Trusty said.

“The show includes such an amazing array of historic and contemporary fiber works to commemorate the centennial of the 19th Amendment. The four mixed-media works I have in the show are created by hand-inking and embroidering onto older photographs from the 1940s and ’50s,” she said. “The series is meant to celebrate relationships between women that have been historically overlooked or erased.

“This is the first exhibition I have participated in since the pandemic began. I was very excited to see that the Baum Gallery has created a virtual version of the exhibition on their website, as well as having the physical one, for people to access in whatever way is best for them.”

Seymour said the exhibition will culminate with a commissioned, site-specific installation by Kansas-based artist Rena Detrixhe, who will create a patterned “rug” out of red dirt imprinted by discarded shoe soles. This fall, Detrixhe

is serving as an artist-in-

residence for the new UCA College of Arts, Humanities and Social Sciences. Her residency is supported by the UCA arts fee, which is administered by the college.