Mark Ivanir (from left), Hilary Swank and Ray Panthaki appear in the new series “Away.” (Netflix/AP)

NEW YORK — Before she went into acting, Hilary Swank was one of those kids who looked up at the sky and dreamed of blasting off to outer space. She got to pretend living out that dream in her new Netflix series, "Away," where she plays an astronaut commander leading a voyage to Mars.

"I just love an adventure, and I'm a Leo," Swank said.

Executive produced by Jason Katims, "Away" follows Swank's character Emma Green and her international crew on this dangerous mission as she leaves behind her husband (played by Josh Charles) and teenage daughter (Talitha Bateman) for three years.

The series shifts back-and-forth between what's going on in space and back home with her family. Charles juggles health problems while essentially being a single parent. Emma has some personnel problems onboard (prickly personalities, a colleague who may think of her as more than a friend, and a rookie astronaut on her team), but what's not a factor is that she's a woman in charge.

"I think it's pretty darn awesome that's not the drama of this show. It's not about 'Oh, it's a female commander,'" Swank said.

Swank won her first Oscar for her 1999 portrayal of a transgender man in "Boys Don't Cry" and her second for playing a boxer in the 2004 movie, "Million Dollar Baby." When it came time to play an astronaut, the actor welcomed the challenge. 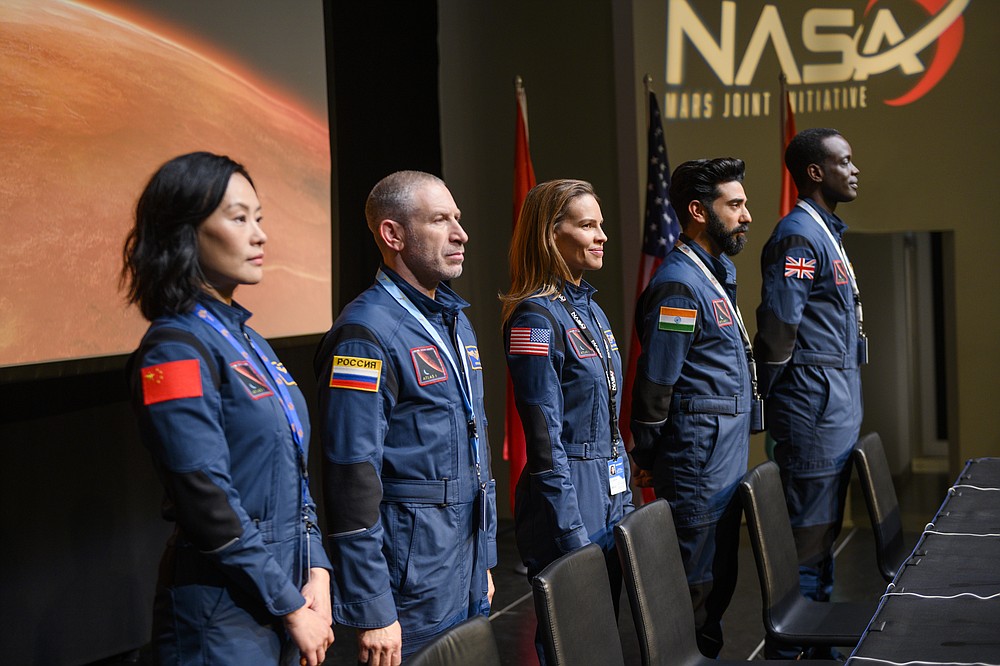 This image released by Netflix shows, from left, Vivian Wu, Mark Ivanir, Hilary Swank, Ray Panthaki and Ato Essandoh from the new series "Away," premiering on Sept. 4. (Netflix via AP)

"It took a lot of effort to make it look effortless," Swank said. "You're hanging by your hips, so when you squeeze your glutes, you go forward. And when you squeeze your abs, you go backwards. But naturally, if you're only being held by that part of your body, you really want to omit these weird sounds but you can't because obviously zero gravity is no effort. So it took a lot of getting used to for all of us."

The wire work did more than just give the actors a good workout. They were forced to spend more time together than usual — because they were literally hanging out on set.

"You're on a wire and you can't easily get off and go into a corner and get on your phone. We were really present with one another," Swank said.

The self-professed adventure junkie says she did encounter something that surprised her when she first tried on her spacesuit: "full-on" claustrophobia.

"They put the gloves on and it actually goes click, and then you can't get it off until you push a button and then do a lever and you can't take your gloves off by yourself. And then the helmet went on. And then it went click, and I really freaked out," Swank said.

"I tried to keep myself under control. I didn't want people to worry. But then they clearly were like, 'Are you OK?' And I looked in the mirror because I was in my fitting and I was bright red and I was sweating and I was like, 'Yeah, I'm just hot.' So that was something that I had to work through in 10 episodes. But I eventually worked through it."