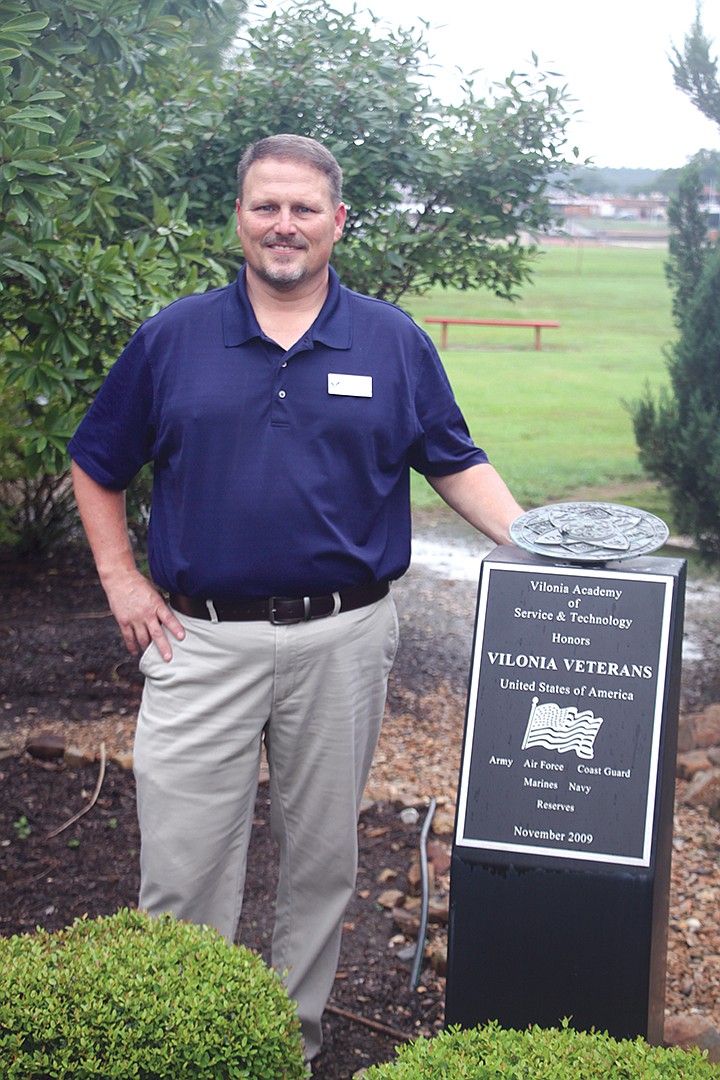 Rodney Partee is the new principal at Vilonia Middle School. He replaces former principal Lori Lombardi, who retired earlier this year. Partee has been an assistant principal at the middle school for 12 years. (River Valley & Ozark Edition / Sam Pierce )

The biggest obstacle for Rodney Partee, the new principal at Vilonia Middle School, has been the uncertainty of this school year.

“A lot of teachers are perfectionists,” he said, “and the unknown is not something they deal with. Normally, they are organized and have procedures laid out, and we weren’t able to do that this year.

“But our teachers have worked tirelessly to make sure everything they do in the classroom is done virtually as well — they have stepped up to the plate in a lot of different ways.”

He said many of the teachers have supplemented their instruction for virtual schooling, but “they have taken it on and haven’t complained. They have done really well.”

Partee was named the school’s new principal on Feb. 24, replacing former principal Lori Lombardi, who retired. He said Lombardi was a good mentor for him and helped teach him the curriculum part of the job. Partee has been the assistant principal at the middle school for

12 years, and he said the transition into the principal job was started almost immediately, but he didn’t officially take over until July 1.

“I have really enjoyed the smoothness of this transition,” Partee said. “We have prepared to the best of our ability, but there comes a time when it is better to get started and see how everything goes, to see how all the preparation pays off.

“Our kids have been excellent, following the safety procedures, and our parents have been supportive. Everything has gone well so far.”

Partee said Vilonia Middle School has around 380 seventh- and eighth-graders, which including virtual students. He said slightly more than 25 percent of the student population chose to do the virtual-learning option. Debbie Knowles is the principal for the virtual academy.

“We still consider those kids our students. It is just a different way to get the skills they need, other than on-site learning,” Partee said. “Right now, we are trying to figure out the problems before they arrive and be proactive and solving problems, which includes the best ways to handle the COVID-19 requirements in a school that is not designed to have kids 6 feet apart.

“We are trying to meet the requirements as best as possible for the safety of the kids.”

Partee has worked in education for 27 years, 14 of which he served as a football coach for various school districts, including Greenbrier, Sheridan and Green Forest. He did his student teaching at McCrory in 1993, where he worked under former head football coach Joe Hart.

“I got to know him there, and he told me, ‘Teaching and working with kids keeps you young,’” Partee said. “I have always found that to be true. I am a big kid at heart.”

“I’m excited to have Rodney on our leadership team,” said David Stephens, Vilonia School District superintendent. “He is a great guy and is passionate about doing what’s best for our students.

“He is as genuine a person as I have ever met.”

Partee said he wanted to move into an administrative role so he could spend more time with his children, both of whom graduated from the Vilonia School District. His son, Jerrod, attends Arkansas State University-Beebe, and his daughter, Kaylee, attends National Park College in Hot Springs.

“When I realized I was spending more time with everyone else’s children than my own, I thought I needed to be home more and not spend so many late nights at the field,” Partee said. “And I worked on my master’s degree for quite a while, and the more I learned about being a principal, the more I wanted to become one.”

This is the first head-principal job for Partee.

“It is something I have always wanted to do, and it means the world to me,” he said. “It is what I have worked for all these years.”

Partee is originally from Brinkley, have graduated from Brinkley High School in 1988. He earned a bachelor’s degree in education from Arkansas State University in Jonesboro in 1993 and a master’s degree from ASU in 2005. “

“I just knew in life that I wanted a job where it didn’t feel like I had to go to work every day,” Partee said. “I was able to do that with coaching, and I fell in love with the teaching aspect of it.

“It has been a natural progression because I have always known that I have wanted to do something with kids — it was a goal of mine to run my own building and work for a great school district.”