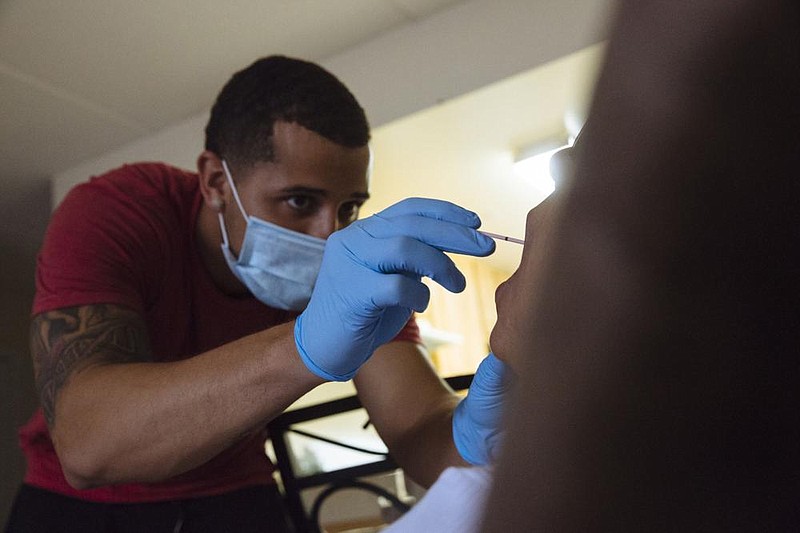 A U.S. emergency department, long an imperfect shelter for those with nonurgent medical needs, is perhaps the last place you want to be in a pandemic.

Covid-19 has aggravated an already broken U.S. health care system in which at least 30% of emergency department visits were deemed unneeded before the virus's arrival. Patients with less urgent conditions often wait hours for care, and they're usually left with a hefty bill.

In a time of covid, a company known simply as Ready is logging more than 15,000 visits and 10,000 covid-19 tests a month to patients in New York City; Los Angeles; Washington, D.C.; Reno, Nev.; Miami; and even the marshy bayous outside New Orleans. When called, Ready quickly dispatches an EMT or paramedic to a patient's home. There, its so-called Responders work with doctors linked through iPads to take vitals, diagnose problems, prescribe therapies or, if needed, escalate cases to the closest emergency room.

While this may sound like a concierge service for the rich, Ready's target market is Medicaid, the insurance program for low-income Americans that's accounted for about half of its patient visits.

"Covid accelerated a trend that had already begun, which is a shift from institutional brick-and-mortar urgent care to the home setting," according to Julian Harris, a Ready board member. "It's impressive to see the organization rise to the challenge of providing care in the most difficult of times, in places and to populations that other companies have not focused on."

That's "compelling for an investor," he said.

The idea for Ready came during a trip to Israel by serial entrepreneur Justin Dangel, 46, now the company's chief executive officer. Dangel was galvanized by a nonprofit that equipped Israeli EMTs with motorcycles and defibrillators, with the objective of beating ambulances to patients and victims of trauma.

A health care outsider, Dangel later spoke with EMTs in the U.S. about the service. That sparked talks about ways to utilize EMTs to relieve pressure on the U.S. system and, eventually, to the birth of Ready, which treated its first patient in 2018.

But it's been the pandemic that's validated the business model, drawn new capital and talent, and fueled the company's growth. With covid-19, telemedicine use has reached record highs. Ready, meanwhile, has seen a fivefold surge in demand for its services since March. "This is a social impact project that's gotten out of control," Dangel said.

On the last Monday of March, as a flood of virus cases pushed New York to a breaking point, Democratic Gov. Andrew Cuomo pleaded during a news briefing for health care workers to come to the city to help.

Ready had planned to begin services in New York in 2021. But hearing that call spurred the company to contact Cuomo's office with an idea: Ready could conduct covid-19 tests within the city's public housing complexes.

"It was the perfect fit," said Gareth Rhodes, deputy superintendent to the New York State Department of Financial Services. "It wasn't just about bringing a test, it was about providing an opening to a whole plethora of health care services."

Abel Collado, 25, is a paramedic and firefighter from the Bronx. He was just weeks into his new job at Ready when the partnership launched. The company had fewer than 15 Responders in the city at the time, and Collado was tasked with conducting testing in the communities he grew up in.

"Words can't describe what it's like to be a young adult who is born and raised, and grew up on these streets, and is still living in them, to serve these people," Collado said. Treating patients from within their homes has allowed Collado to better address the socioeconomic factors that influence health outcomes. Some have little means of transportation, while others lacking a primary care physician aren't able to easily get their medications. Many can't speak English.

Collado has since become a supervisor, and has been pivotal to the recruitment of 150 full and part-time Responders employed by the company that have conducted more than 5,500 visits and 3,600 covid-19 tests for New York City Housing Authority residents. Now, Ready is seeing New Yorkers outside of the partnership with the state as well.

More than 1,300 miles away in Louisiana, Ochsner Health System Inc. has also turned to Ready to conduct covid-19 tests. In this case, they're not just for symptomatic patients, but for the immunocompromised preparing for surgery or chemotherapy. Ready also handles follow-up when patients are discharged.

Well before the virus swept the nation, Louisiana's largest health system decided to take a chance on a startup headquartered in New Orleans after struggling for years to reduce unneeded ER visits. Ready was integrated into Ochsner's medical triage platform in 2018, creating a pathway for Responders to beeline directly to some of their first patients' homes. It also created an appointment-based community health-care program for Ochsner's "Medicaid frequent-fliers"-underserved patients who often seek care in the ER.

Alexi Deville is a 26-year-old EMT from Metairie, La. She meets with Medicaid patients identified by Ochsner once a week for as long as three months. Working with doctors online, she treats their allergies, coughs and rashes. She also finds them in-network primary care doctors, schedules appointments and gets prescriptions refilled, she said.

"I've been here all my life," Deville said. "I know these faces."

Ochsner saw a 70% reduction in nonemergency ER visits between June 2018 and Dec. 2019 as a result of this service, said Harry Reese, Jr., the system's vice president of post-acute and home care. "We saw it as a cost-effective model that could be scaled quickly," Reese said.

New York and Ochsner don't pay Ready directly for these services. Instead, the company gets reimbursed by insurers. Its pitch to health-systems: Give us access to your patients and we'll take care of the rest. Its pitch to payers: We're cheaper than the ER.

The average ER bill is $2,000 per visit, according Premier Inc., which helps thousands of hospitals and health systems manage costs. Premier estimates that if those 3 in 10 "unnecessary" visits could be prevented or managed in lower-cost settings, $2.5 billion could be saved yearly.

Ready's services cost payers $150 to $200. For patients seeking Covid-19 tests who don't have insurance, Ready is reimbursed by the U.S. government under a series of recent economic stimulus packages.

It's cheap in comparison because Ready has little overhead, employing around 70 physicians, clinicians and nurse practitioners who squeeze plenty of 20-minute stops into the workday, a time frame Dangel said is more than two-times longer than the average ER or urgent-care visit. Ready contracts with Teledoc Health Inc. when it needs additional licensed medical officials.

Meanwhile, its 450 full-time and part-time EMTs and paramedics -- a cheaper form of medical labor -- are able to deliver the care in person. That gives the company a "structural advantage" over an emerging field of rivals, Dangel said.

"It's not like the hospital, where brick-and-mortar business is such that it loses money on Medicaid, but makes it on commercial patients," said Harris, the board member who is also a partner at Deerfield, and who was the federal government's chief health care financial officer from 2013 to 2015.

In 2021, Ready plans to launch a pilot program that will allow more than 100 doctors to dispatch responders into their patients' homes. "We're building a technology platform that can be sold separately," and scaled nationally, Harris said. "You can expect that ultimately people will have access to Ready Responders in every city in America."