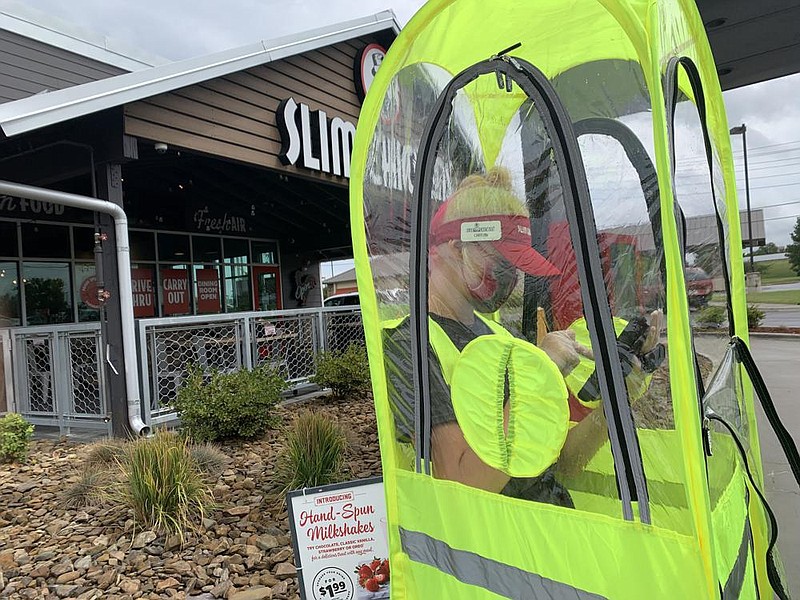 Caitlin Taylor takes an order at Slim Chickens on Thursday at 5240 W. Sunset Ave. in Springdale. The locally based restaurant chain continues to expand nationally and has capitalized on its drive-thru and curbside pickup during the pandemic. (NWA Democrat-Gazette/Andy Shupe)

Fayetteville-based Slim Chickens is continuing its plans for expansion, moving into three new states despite the covid-19 pandemic.

Plans are to push into New Jersey, Maryland and Washington next year and include opening the brand's eighth location in the United Kingdom, Tom Gordon, Slim Chickens' chief executive officer, said in a recent interview. The company has opened more than 100 stores and recently began a growth plan with a goal of opening 600 restaurants in the next decade.

The company recently made the Inc. 5000 list of the nation's fastest growing private companies for the first time. It ranked No. 3,199 with 120% growth over the past three years.

Slim Chickens competes in the fast-casual segment, where restaurants provide a slightly more formal dining experience compared with fast-food operations. While fast-casual restaurants don't have a wait staff, servers generally carry food to tables. Other aspects of the segment include a comfortable atmosphere, usually including music, big-screen TVs and appealing graphics.

In early 2019, the company began rolling out smaller footprint stores, between 2,400 and 2,800 square feet, to better move into urban markets and locations where space is often available only at a premium price. The company has added stores in nontraditional locations like stadiums, malls and airports and has tried stores with smaller footprints in London, where they've proved to be popular.

Slim Chickens was founded in 2003 and is privately owned. Twenty-two of the stores are owned and operated by Slim Chickens while the remaining 74 are stores owned by franchisees.

With the onset of covid-19, the company focused mainly on its drive-thru and takeout options, refining its procedures and adding app-driven curbside pickup. In some areas, it closed its dining rooms but recently began to open them up based on local demand and regulations.

Gordon said the restaurant chain's ability to adapt and persevere during the financial pressure brought on by the global pandemic has paid dividends, attracting interest in the brand from potential franchisees. He said plans are to open at least 14 locations in 2020.

"They're hearing about how well we're doing," Gordon said. "There's no better litmus test than covid-19. It's not a positive thing [the pandemic] but we've been able to do well."

In a recent interview, John Nicolopoulos, partner and national retail and restaurant sector leader at RSM US LLP, agreed, saying there's room for growth in the restaurant sector despite the pressures brought on by covid-19. RSM US LLP is the nation's leading provider of audit, tax and consulting services focused on the middle market.

Nicolopoulos said restaurants that are not only surviving but thriving in the current environment have capitalized on drive-thru and delivery, combined with solid technology in the form of apps, and are well organized with strong customer service. He noted the success of Domino's in recent months as an example of what it takes to do well -- a set-up based on delivery, supported with a good app, and a product that travels well.

He said in the coming months, as state and federal business funding programs dry up, the restaurant industry will see more closures and bankruptcies, leaving opportunities for those who weathered the storm.

"Covid has been the great accelerator," Nicolopoulos said.

According to a survey of 6,500 members by the National Restaurant Association taken in mid-April, more than 8 million restaurant workers have been laid off or furloughed since the beginning of the U.S. outbreak. The industry is predicting revenue loss of $240 billion by the end of the year.

Nicolopoulos said that while consumers will eventually return to sit-down dining when they feel its safe and there is clearly a great deal of pent-up demand in that sector, delivery, drive-thru and curbside pickup will be a strong component of the restaurant industry going forward.

For franchisers, he said, a key question is when will investors feel comfortable enough to jump back into the industry?

Slim Chickens' Gordon said his company is seeing that interest and he credits word of mouth in part for the brand's growth.

"The community is small and they hear from our franchisees how well they've been supported," he said.