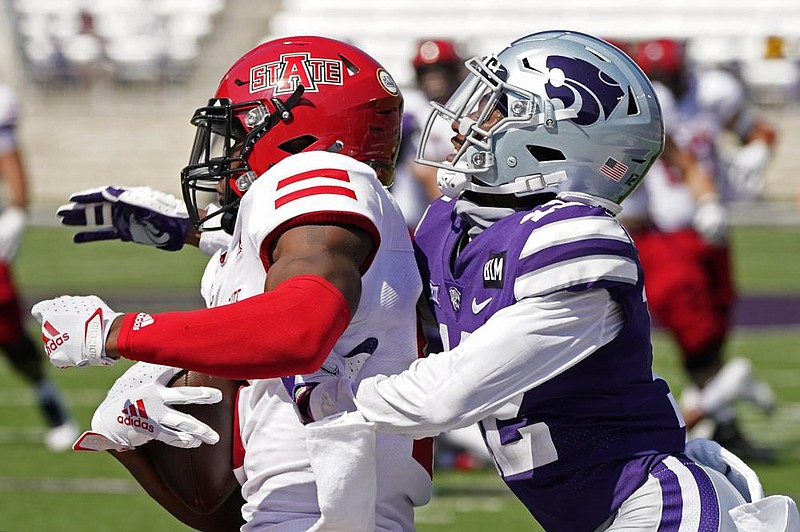 Arkansas State receiver Jonathan Adams Jr. (left) makes the game-winning catch in front of Kansas State’s AJ Parker with 38 seconds remaining in the Red Wolves’ victory Saturday in Manhattan, Kan. It was ASU’s first victory against a team from a Power 5 conference since 2008. (AP/Charlie Riedel)

MANHATTAN, Kan. -- Just on the other side of media row in the press box of Bill Snyder Family Stadium, Arkansas State University coaches shouted through the walls and banged on the tables as senior wide receiver Jonathan Adams Jr. caught the eventual game-winning pass with 38 seconds remaining.

The Red Wolves knew they were on the verge of completing a win 12 years in the making. And minutes later, Arkansas State would seal a 35-31 upset over Kansas State -- the program's first victory over a Power 5 opponent since beating Texas A&M in 2008.

The Wolves (1-1) were 0-20 in such games entering Saturday after toppling the Aggies.

"Excited, but not surprised," ASU Coach Blake Anderson said. "I was really clear with our guys all week. I felt like we had a pretty good opportunity to win. I think the guys absolutely believed that to be true and played that way."

It's unclear how many of those players were out due to covid-19, but after Friday's mandatory tests, Anderson said a lot of players who were never supposed to travel played on Saturday.

"Next 'men' up mentality," Anderson said. "It's the nature of the environment we're in. We're wanting to be super safe and very careful. We're not going to bring anybody on the trip that might be compromised or might even be a chance of being compromised.

"We brought a really small roster -- and with a bunch of guys that typically would play for us that were left at home to make sure they're OK -- and guys did a phenomenal job and stepped up and made plays when we absolutely had to have them."

To counter that inexperience, Arkansas State pulled out its tricks.

It started with a wide receiver pass from sophomore Jeff Foreman to junior Roshauud Paul for a 48-yard score in the second quarter to cut Kansas State's lead to 21-14. It was followed by a nearly successful onside kick from junior Blake Grupe after a dysmal onside attempt a week ago against Memphis.

After tying the game in the third quarter, ASU ran a fake punt on its first possession of the fourth quarter, which resulted in a pass interference for a first down. On the next play, Arkansas State ran a double-reverse pass from Paul to junior quarterback Logan Bonner for 17 yards to set ASU up with first and goal from the 5. Two plays later, Bonner connected with Adams for a 28-21 lead, the Wolves' first of the day.

"I kind of lost count, to be honest with you. We had more to use. All calculated," Anderson said of the trick plays. "Strategically, trying to be calculated, but aggressive.

"We didn't execute them all great, but they were definitely all in the game plan, and the trick plays on offense were two-for-two. And in a game like this, you've got to try and steal 14 points.

"The kids never, ever questioned one thing. They just did it. And just assumed that it was going to work and at the end of the game, it was enough."

ASU stuck with its quarterback rotation -- Bonner plays two series, sophomore Layne Hatcher plays one, then back to Bonner. Both played well, with each accounting for two touchdown passes.

But it would be Hatcher who would lead the final drive with only 2:30 remaining and Kansas State ahead 31-28. The Red Wolves quickly moved down the field after three rushes from senior running back Jamal Jones (16 rushes, 95 yards) of 13, 7 and 12 yards, respectivel. Then, with 38 seconds to go, Hatcher found Adams in the end zone from 17 yards out to take a 35-31 lead.

The Wildcats (0-1) would reach the Arkansas State 40-yard line before failing to complete a pass down field as time expired.

Hatcher, who hadn't played the entire fourth quarter, patiently waited his turn on the sidelines before leading Arkansas State on that seven-play, 65-yard drive to win the game.

"I think when the whole world doubts you, that's when it's fun," said Hatcher, who was 6-of-8 passing for 61 yards and 2 touchdowns. "It brings you joy to know that hard work has paid off. People count you out but it doesn't matter."

Hatcher credited a lot of guys who had to step in when they weren't expected to -- similar to him last season when he took over the starting job after Bonner suffered a season-ending injury.

Even sophomore tight end TW Ayers, a former walk-on who is typically ASU's third-string tight end, stepped up to play defensive end for the Red Wolves and recorded his first career sack. Anderson said Ayers "was the picture" of the Red Wolves on Saturday -- a guy that will do whatever you ask of him.

In a season full of uncertainties, it's players like Ayers who will be asked to step up each week. And just because Saturday's win was one for the history books, Arkansas State is still looking forward.

"We just proved that our two-deep is pretty darn good," senior transfer linebacker Justin Rice said. "It's a great confidence booster, but we have to realize it's just one game.

"We can't sit on a high horse and think that we're the stuff now. There's no 'Oh, we beat K-State, now we can relax.' No. We've got to keep working just like we did this week. We've got to prepare like every opponent is the same." 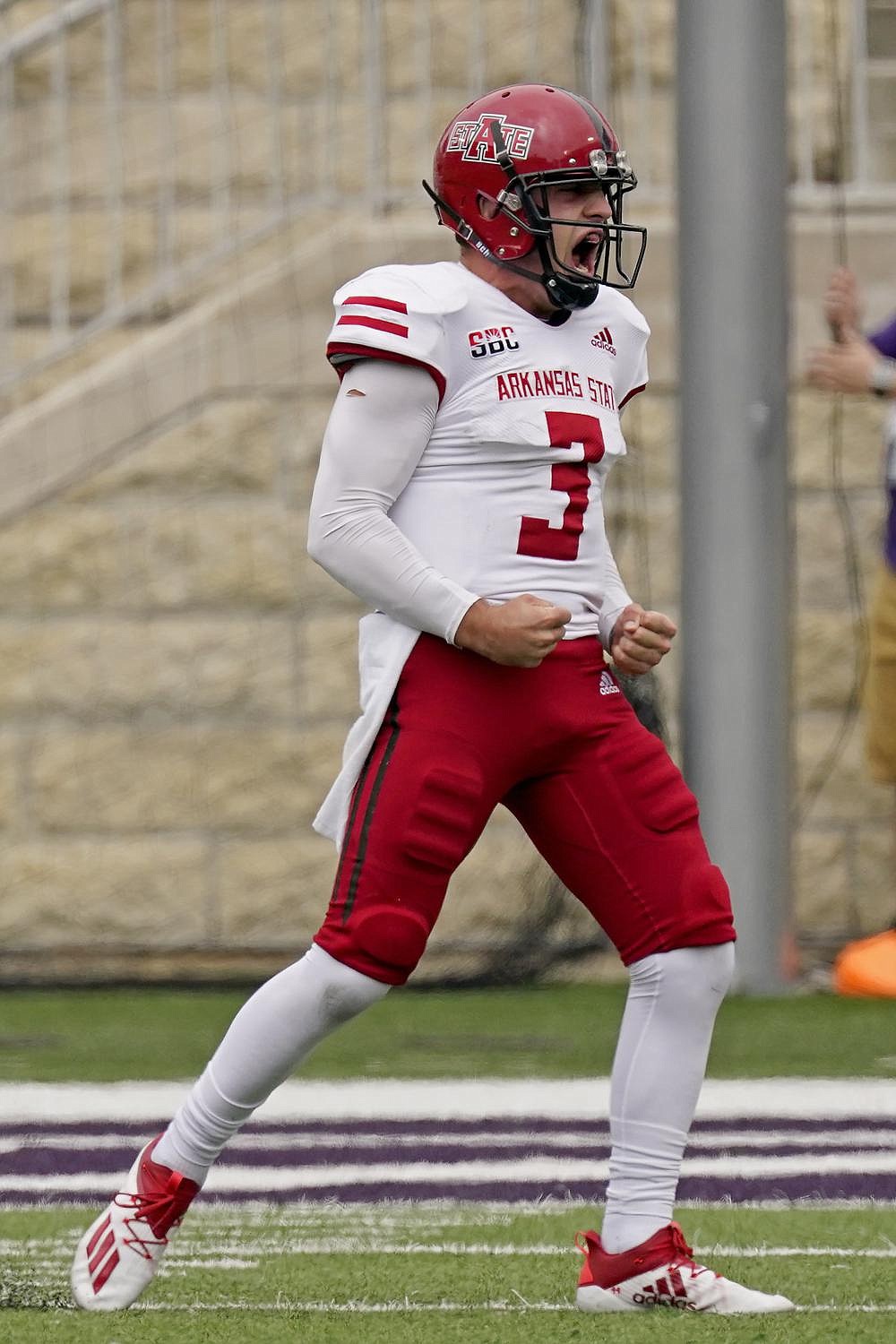 Quarterback Layne Hatcher celebrates after throwing a touchdown pass for Arkansas State during the second half of Saturday’s game. (AP/Charlie Riedel) 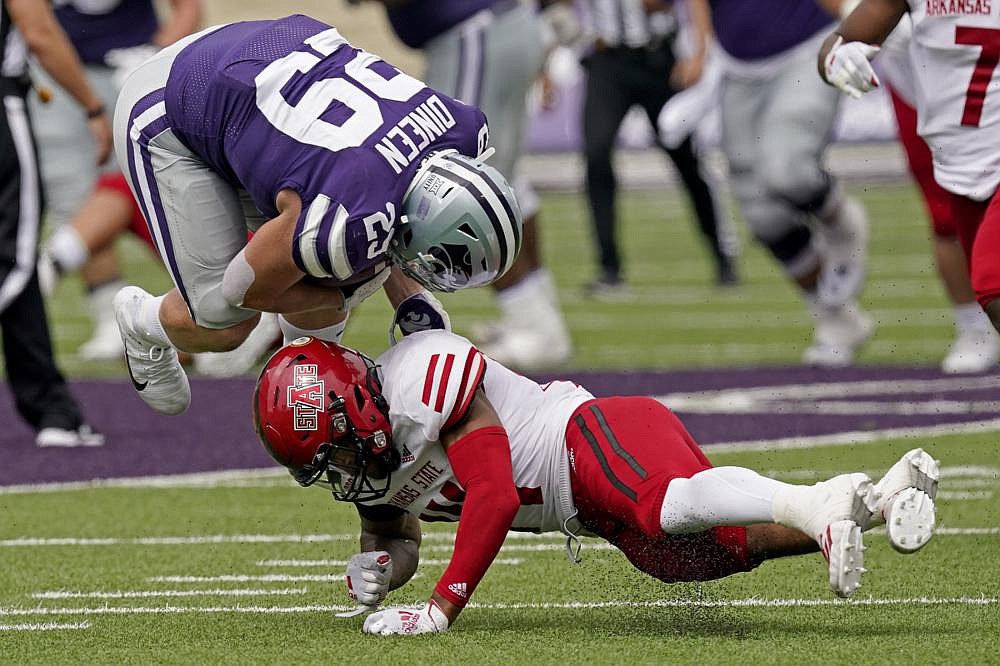