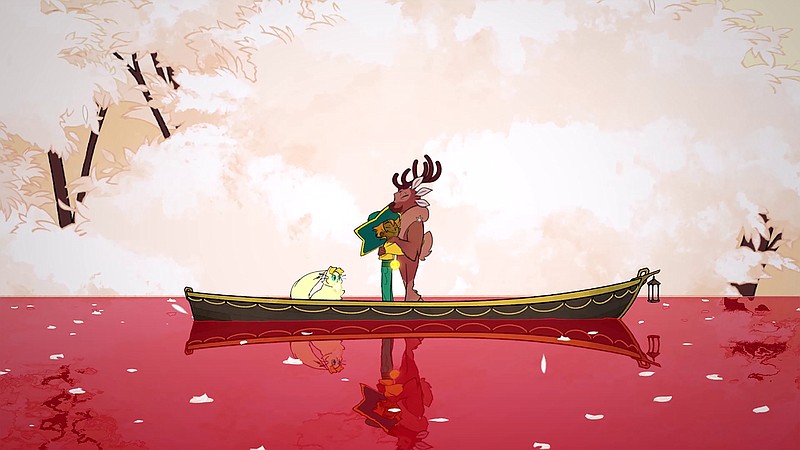 Death means something different for everyone. Through the lens of religion, lived experiences or fears, most of us wonder what dying will look like, and what it will feel like. Nearing the end, we might ask ourselves if we accomplished enough, if we loved enough.

The characters of the video game "Spiritfarer" ruminate on these same questions, experiencing their final moments from different perspectives.

While their thoughts and feelings vary, love connects these characters: Each of them feels the need to be cared for at death's door. And that's exactly what "Spiritfarer" is about. In this game (out now for Switch, PS4, Xbox One, PC and Stadia) you care for spirits — beings that appear as animals or creatures, who might have once been human — but also grieve them when they're no longer with you.

Themes of death are handled with insight and grace. But the game isn't without stumbles: Inconsistent writing leaves some characters and quests lacking in depth.

In this management sim, you play as Stella, a girl who becomes a ferrymaster for the deceased in a fantastical world, guiding spirits to the afterlife. Traveling across a vast archipelago, you visit gorgeous islands and locales to convince a handful of spirits to board your ship. Once aboard, passengers ask you to construct homes and workstations such as a fermenting cellar, foundry and orchard. All this construction requires materials like ore and wood, or the use of other stations on your ship, like the foundry to smelt ore into ingots.

In online and local co-op, one player takes the role of Stella while the other plays as her cat, Daffodil.

Daffodil can jump, glide, use ziplines and work at stations around the boat just as Stella does, all with his own adorable animations, like pulling up crops from the ground with his teeth. The only drawback is that Daffodil can't speak to others, meaning Stella leads the way for starting quests and triggering narrative moments.

While most games view death as a fail state, in "Spiritfarer," it's an essential and clever process for progression. You need to collect spirit flowers, which are small plants left behind in the homes of deceased passengers after they've gone through the Everdoor, a gateway to the afterlife. Spirit flowers are used to upgrade your boat so that you can navigate to new, previously closed off areas. Similarly, you're granted Obols by completing a passenger's main quest; these tokens can be traded at shrines, found at specific islands, for new platforming abilities such as double jumping.

To make progress on your passengers' quests, you complete a series of menial tasks (mining, cooking, gardening). But similar to games like "Animal Crossing: New Horizons," it's the fruit of your labor that makes the work rewarding. Managing the moods of your crew, for example, can make things easier for you: The happier they are, the more they'll help on the ship. For example, Summer, a shawl-wearing snake, sings to your crops to make them grow.

But it's also just plainly satisfying to bring these characters happiness once you begin to care for them. Nothing makes Atul, a flute-playing frog, happier than some tasty grub or a hearty hug. His optimism is so infectious, it's hard not to smile.

Though many tasks can be repetitive, they're at their best when they become multi-step puzzles. Giving a character a blanket, for example, requires sheering a sheep and weaving together wool at a loom. Or a specific meal, like french fries, means growing sunflowers and potatoes, crushing the sunflowers to soak out the oil, and then cooking the oil with potatoes in an oven. It may not always be clear exactly how to accomplish these requests, but it's fun to break them down and figure out how one step leads to the next.

Sometimes, however, these instances veer too far into obscure territory. I had no idea that planting a certain pack of seeds (which got lost in a large, unruly inventory system) would grant me a new passenger who grows out of the ground. I had found all the other spirits by visiting islands. In this scenario, the game would benefit from a hint system or better instruction.

Crafting takes place on the boat, but you also spend a considerable amount of time on land, completing quests for passengers and side quests for other spirits who you meet along the way. I enjoyed the crafting element of quests much more than I did fetch quests. Unfortunately, "Spiritfarer" is chock-full of the latter. It's no fun to traverse from one already explored island to another repeatedly, just to speak to characters briefly or deliver items.

But, when you're off somewhere new, exploration is an absolute joy. The map is large, with different biomes, climates and secret areas to find.

Aesthetically, the islands you visit present vivid but calming visuals inspired by the Japanese woodblock prints of painter Hiroshi Yoshida. Discovery is bolstered by fun platforming abilities and animations, including protagonist Stella clutching her hat as it puffs up like a balloon to glide swiftly through the air, or smoothly zooming across a zip line to access higher or hard-to-reach vantage points.

The Everdoor is a common destination. Your passengers are only with you for so long. Eventually, they'll ask you to accompany them there, notifying you that they're ready for the end.

These are difficult but heartfelt moments, especially after spending meaningful time bonding with your passengers. As you sail toward the door, they talk about regrets, acceptance, longings and fears. Stanley, a boy who appears as a walking and talking mushroom, expresses how all he ever wanted was to make others happy, and how scared he is to face the end. Gustav, who comes across as a snob at first but is later revealed to be caring and passionate, speaks of how he thinks art outlives us and transcends death.

But not all characters articulate something poignant. Giovanni, an unlikable character who doesn't seem to learn much from his mistakes, talks about how he has no regrets — and when he speaks of sympathy, it comes across as disingenuous. The same can be said for Mickey and Bruce, two brothers that appear as a bull and a hummingbird, who never quite let you through their tough outer shells, and whose final quest is more confusing than it is interesting.

The instances that stick with me most from my time with "Spiritfarer" are the quieter moments. It's sitting by a cliff with Summer as she teaches me the rejuvenating power of meditation; it's holding Alice, an old woman whose spirit takes the form of a hedgehog, in one arm and guiding her back to her home so she doesn't get stuck at the bow of the ship, cold and alone all night; and it's fulfilling Stanley's wish to put on a play since he so badly wants to be accepted and so desperately wants to be good at something.

The absence of passengers is deeply felt. Their presence lingers long after they're gone. I felt a pang of grief when Gwen, a deer, no longer accompanied me on shopping trips, or when Astrid, a lioness, wasn't looking for ore beside me as I mined in caves. This is where "Spiritfarer" shines.

It's not just a game about easing fears of death, but also about its aftermath of grief, and the legacy these characters leave behind. One leaves without a single word. You don't get to say goodbye. It was shocking in its suddenness; this happy-go-lucky friend of mine seemed the most easygoing of my passengers. I couldn't understand it. But the more I thought about it, the more I realized perhaps that was the point: Death does not care, nor does it wait. Sometimes, it happens so suddenly we can barely process it.

"Spiritfarer," despite some flaws, is one of the best death-positive games I've played. It's refreshing to see death portrayed as something healthy, cozy even, in the serene aura of "Spiritfarer." Some spirits just want a hug, their favorite meal or to be surrounded by friends as they come to terms with their demise.

It's not a happy game, but it does a splendid job of showing how small acts of kindness can make someone's final moments easier to bear. 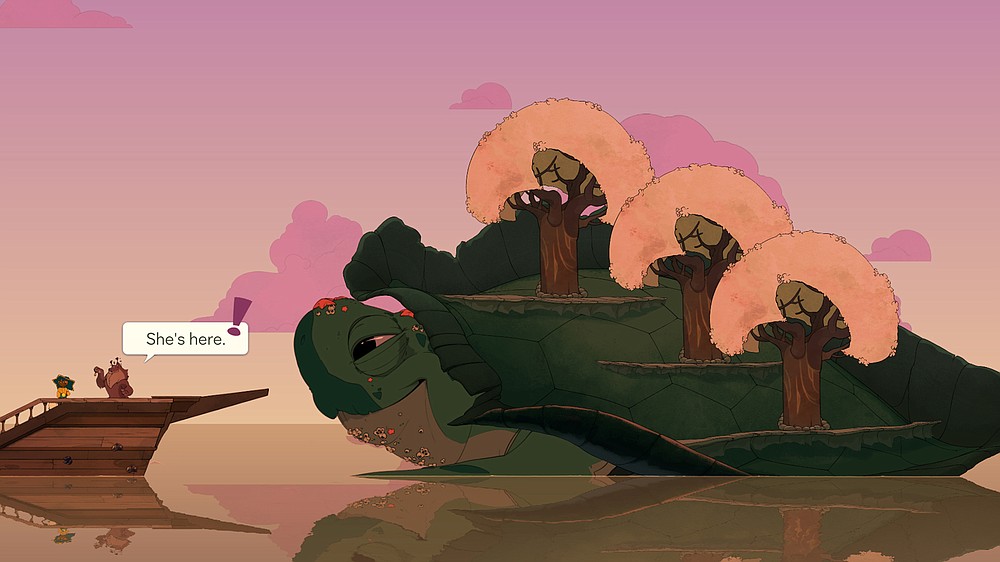 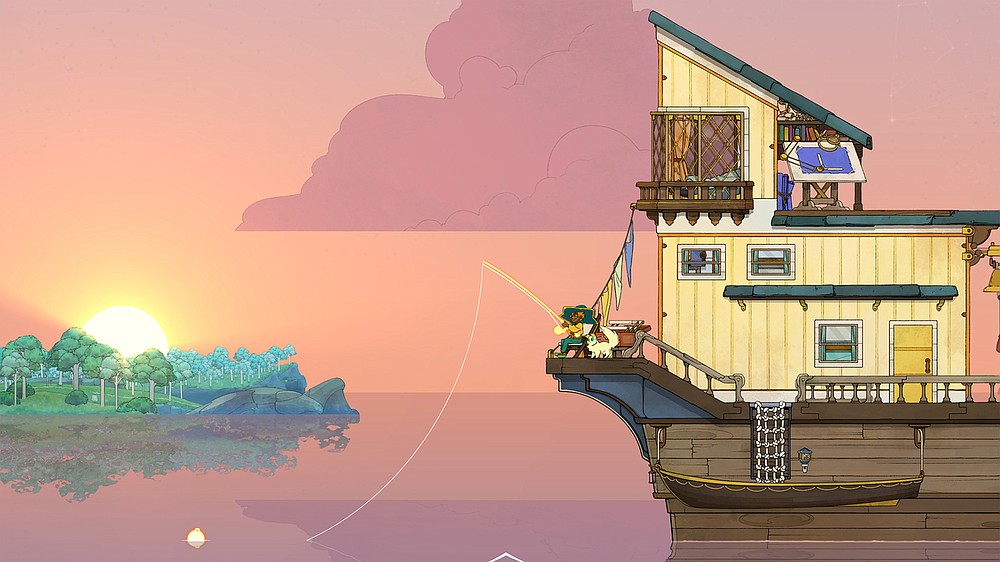 Stella and Daffodil enjoy fishing as they pursue Stella’s duties as ferrymaster to the afterlife across a magical sea where souls stranded on islands must be carried to their final portal in the videogame “Spiritfarer.” (Courtesy Thunder Lotus Games) 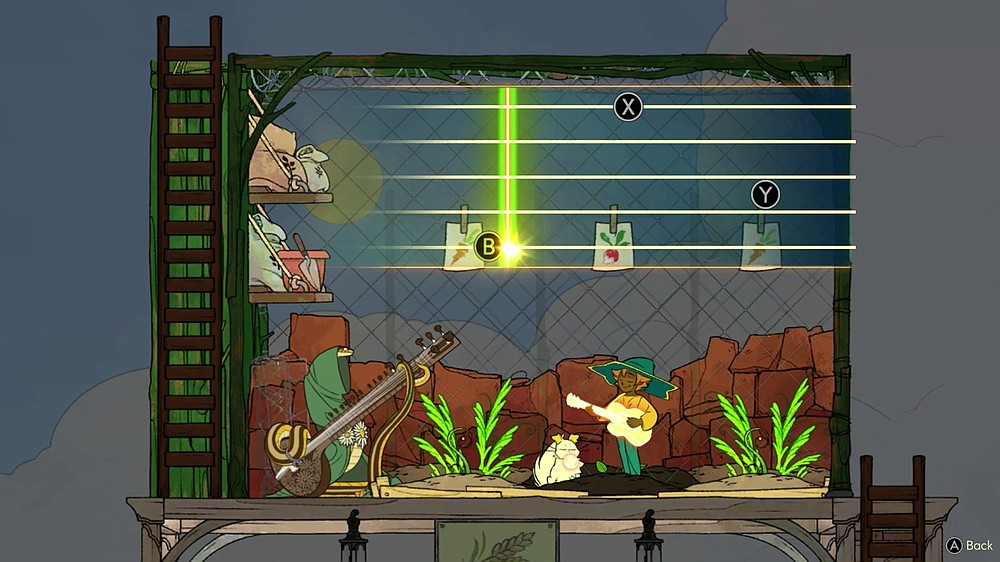 Rated: T for teen because of language, tobacco use, references to violence